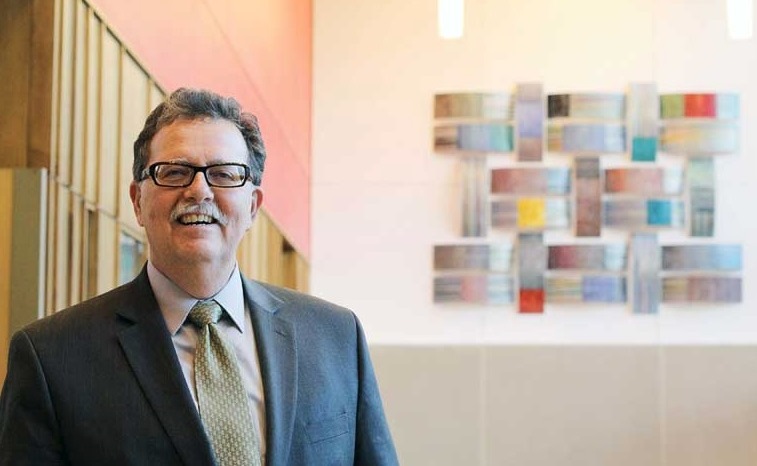 A Guest Article for REVITALIZATION by Reemberto Rodriguez.

Throughout the country, local jurisdictions are challenged with decreasing resources and increasing demands for services.

Fiscal responsibility is paramount in growing local economies and creating vibrant places without endangering the financial position of local governments. 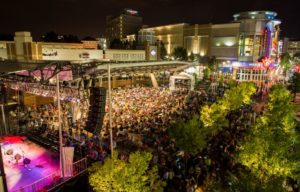 The Silver Spring Jazz Festival brings over 15,000 people to Veterans Plaza every year.

In Montgomery County, Maryland, this reality hit home when—in times of prosperity—a major civic building and plaza were conceptualized, but not built until financial hard times hit. The County was faced with challenges not seen in decades.

Yet, under the leadership of its three-term County Executive, Ike Leggett, not only was the facility built, but it has flourished with innovative programming…all while keeping the stellar triple AAA bond rating for the County.

The Silver Spring Civic Building and Veterans Plaza is Montgomery County’s premier welcoming and gathering place; it is the community’s living room and patio.

Here is where people from all walks of life, different parts of the world, and across the entire age spectrum come together to celebrate the intersection of culture and commerce.

The commercial center of Silver Spring—a near suburb of Washington, D.C.—was a victim of the rampant disinvestment that ravaged the area from the late 60’s through the 70’s. Redevelopment efforts in the 80’s and 90’s floundered. 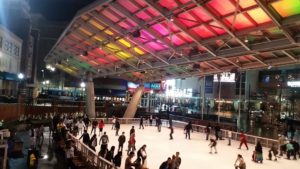 From October through March, the Plaza Pavilion is activated with an ice skating rink.

Finally, an intense community effort led to a consensus to revitalize the core area of downtown with a major new redevelopment, hoping it would lead to additional investment throughout the broader downtown.

The revitalization was to include a public gathering space that would replace an old, historic armory demolished to make way for a parking garage…a decision that was controversial, to say the least.

Given that Silver Spring is not a city—it is in an unincorporated part of the County—the new space could not be a city hall. A traditional government center was not desirable; and neither was a rec center, senior center, or the like… So, the concept of a civic building and plaza was born.

Then the Great Recession happened. 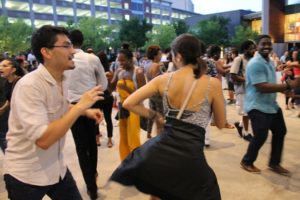 Dancing is common in the pavilion when the ice skating rink is not in place.

No longer was it possible to underwrite and pay for all the programming, services, etc. that the heydays prior to Great Recession had planned for.

The earlier budget had been generous, since Montgomery County is one of the country’s wealthiest counties.

Still, the recession hit even this prosperous area hard, making it impossible to subsidize the operations of the $64 million facility in any meaningful way. Something different had to be done.

So a new concept emerged. 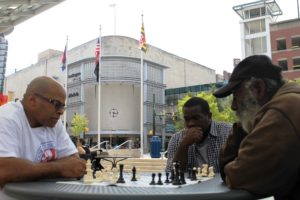 What if civic entrepreneurs and communities were invited and welcome to invent ways to bring this place alive?

What if the place were to become a space where people will bump into each other by happenstance and kismet?

What if this space became the community’s living room and patio?

What if the place was not programmed by the public sector, but rather by its users? 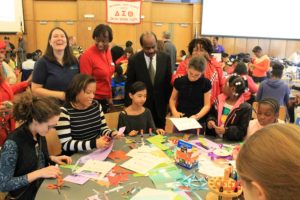 This new public space could conceivable activate the entire downtown area, and generate economic activity throughout the year.

It could become a place where veterans are honored, people share heritage and traditions, new Americans are welcome, and all celebrate diversity, promote community engagement and civic discourse.

In the words of County Executive Leggett, “It is not only about bringing new people to the table; it is about making a bigger table.”

And so it became. 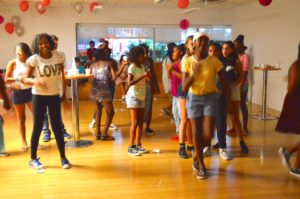 The space also offers rentable rooms for personal celebrations, like this birthday party.

Today, the space is truly the go-to place in the region for community celebrations, festivals, and gatherings of all sorts.

Over 70 festivals a year are held on the Plaza; community celebrations and gatherings happen almost every weekend in the Great Hall; hundreds of community meetings for public discourse take place here; and it boasts a beautiful art gallery.

Only a handful of these events are programmed, produced, and/or funded by the County. The rest are the genius productions of civic entrepreneurs and community activism.

The Silver Spring Civic Building and Veterans Plaza story is unique; yet replicable.

When the County negotiated to have the locally-grown Fenton Street (Craft) Market on Veterans Plaza, it was not only to fill the space. It was just as critical to use this public asset to spark economic activity and encourage micro enterprises be successful in their entrepreneurial ventures.

Over 100 vendors came and went during the first four years of the Craft Market’s operation. And now, as the Craft Market evolves as a brand, we use the same space to provide expansion for the adjacent Farmers Market. 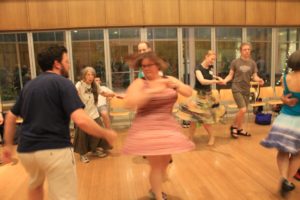 When the operation of the facility was contracted to a home-grown non-profit to introduce ambiance performances (not crowd generators), it was not to simply activate the space. Rather, it was a safety and security measure to innovatively—and cost effectively—augment formal policing efforts.

Now, every Tuesday and Wednesday night, people know they can safely be in the space, and something good will be happening.

When it became evident the facility was too expensive for the very non-profits the place was trying to bring in, an innovative Community Access Pilot Program was created to help defray the cost of rentals.

Now in its fourth year, this program has helped hundreds of groups access the space. Many of these recipients have expressed that they “could not have made the event happen without this critical piece of financial support.” 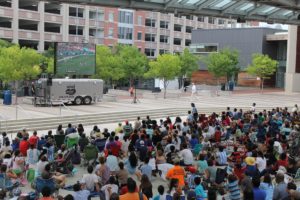 That’s just a short sampling of the activities that routinely enliven the space, both indoors and outdoors.  This place highlights the broader community’s commitment to intentional diversity as a community building – and an economic development – tool.

Over 5000 housing units have recently been built or are under construction within a mile of this dynamic public space. Another 5000 units are planned.

Ethnic celebrations like this FestAfrica happen almost every weekend.

An adjacent old, deteriorated shopping center is coming back to life with major anchor tenants. And, the nearby Fenton Village area has become “Little Ethiopia”, with a new restaurant or service entrepreneur opening their enterprise almost every week.

The arts are flourishing, with at least 20 new venues opening up for live entertainment, and a new artist live/work development will soon to be under construction.

This model of successful space activation as a community-building and economic development tool is replicable in other unincorporated suburban areas. Indeed, it’s currently the model for another suburban area being redeveloped in our own County.

The success of the Silver Spring Civic Building and Veterans Plaza proves that it is not how much the county government spends in programming or services that makes a place successful. It is how successful the public sector can be in sparking private entrepreneurs to invest; enthusing the community to participate; and connecting culture and commerce. 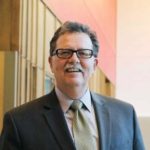 Reemberto Rodriguez is the Regional Director for Silver Spring (Montgomery County), Maryland. In this appointed capacity he serves as the eyes and ears to County government and the community, is in charge of the urban district operations, and interacts with developers, stakeholders, and residents to create placemaking in Silver Spring.

Before coming to County government, Reemberto spent 20 years with NeighborWorks America in various roles, including Curriculum Developer and Trainer for community leadership, community organizing, and community building; program reviewer for organizations seeking to join the network; and technical assistance provider in the Southern District. He also worked as a city planner with the City of Atlanta early in his career; and was the Executive Director of a non-profit community design center.

Reemberto’s education includes a Masters in Community Development from the Andrew Young Policy School at Georgia State University, and a Masters in Architecture and a minor in political science from Georgia Tech. He has also taught at the graduate level along the way. Reemberto has served on various professional and community boards through the years, and is involved in local and national Latino initiatives.