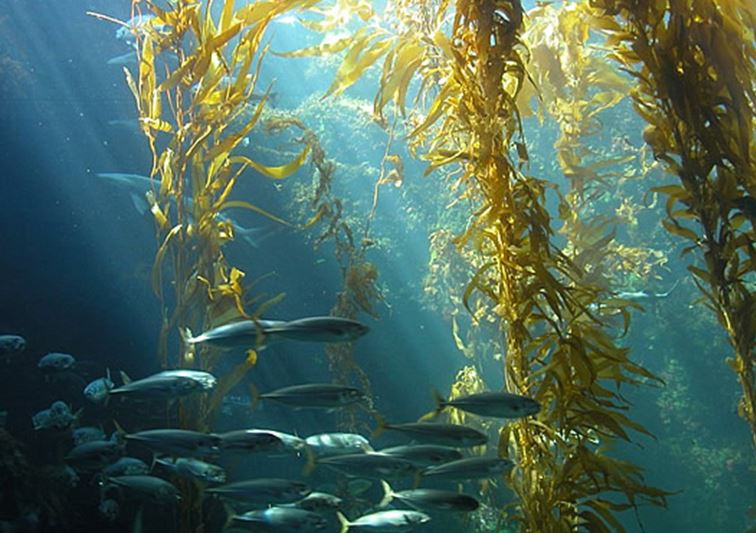 A bonus Guest Article for REVITALIZATION by Roger Bason.

Many of us looked forward to massive amounts of restorative environmental, social and cultural development at the dawn of the new millennia. While that came true, it’s clearly not enough: present trends clearly indicate that the future isn’t what it used to be. Will future generations look back and contemplate what might have been?

Readers of REVITALIZATION, and attendees at publisher Storm Cunningham‘s workshops—already know about the restorative power of shellfish aquaculture and mariculture, such as the mussels farms of Prince Edward Island, Canada.

Unlike finfish aquaculture (like salmon)—which requires external food sources and thus creates massive pollution—mussels filter the water for existing food sources. The process of farming them cleans the water as a restorative side effect. You’re about to discover a potential large-scale solution that uses those same dynamics. But first, let’s explore the problem in the bit more detail.

The accelerating impacts of climate change and global warming are already evident in the shoreline affects of sea level rise on urban infrastructure, increased storm intensity and frequency, rising levels of Carbon Dioxide (CO2) in the atmosphere that potentially threaten mass species extinctions. Particularly troubling are the accelerating impacts of climate change on ocean health.

Ocean acidification is due to the absorption of atmospheric CO2 at the sea surface and alters marine habitats and ecosystem stability. The health and survival of coral reefs and calcareous organisms such as oysters, mussels, clams, and all shellfish as well as critically important calcium bearing micro-organisms called phytoplankton, have already shown initial impacts of this trend. The rate of change in ocean pH is now at least 100 to 150 times faster than that of pre-industrial times or in other words, anytime in the past 250 years.

Unless significant remedial approaches are applied, the concentration of atmospheric Carbon Dioxide will increase. This objective measurement of CO2, referred to as the Keeling Curve, is now 412 ppm (May 29, 2018). At the current rate CO2 will reach 600 ppm by the end of this century, resulting in an ocean acidity that would disrupt the reproduction of shell bearing animals and dissolve coral reefs. These reef ecologies provide broad ecosystem support in the life cycle of fisheries and the global food system upon which the world’s population depends.

Awareness of this change, and developing effective strategies to avoid this catastrophic outcome requires a transformation of thought, practice and ocean stewardship that can reverse this deadly trend and solve many of these related problems simultaneously.

Solutions are possible and require immediate action. The good news here is that mitigation of climate change is possible with the rapid expansion three related actions; (1) accelerate the growth of ocean farming, (2) cultivation of massive Kelp forests that serve as offshore Carbon Mitigation Banks that improve marine habitat and (3) ecological marine spatial planning policies that integrate investment and social action.

In the 1980’s a concept of ecological farming called Permaculture developed by Australian Bill Mollison gained popularity and remains a viable practice for building local self-sufficiency, food forests and ecological design of communities. A guiding principal of this ecological approach is that “ the problem is the solution”. The proposed re-invention of ocean-based global food security begins with a transformative approach to farming, stewardship and ecological management of marine resources. This process simultaneously reverses the trends of negative environmental impact, while creating jobs and economic revitalization for many shoreline communities. How will this be accomplished?

In a real sense this process is already underway. In 2014 there was a significant shift in the world of seafood. In that year, world aquaculture production exceeded wild capture fisheries for the first time. Most experts agree that the carrying capacity of our ocean fisheries has reached its limit or is in decline. It is unlikely that wild fisheries will make a comeback in the near or foreseeable future. However if practices change, ocean finfish recovery is possible.

Ocean aquaculture is the future of farming and is required to meet global needs.

Due to the impacts of climate change on arable land based farmland, ocean based farming and aquaculture must accelerate in order to keep up with projected global food demand. The 8% of the earth’s surface dedicated to land based agriculture is not sufficient to meet a world population projected to reach 9 Billion by 2050. Worldwide food security can be aggressively addressed by conscious action, supportive government policies, effective business investment fueled by social media and action. 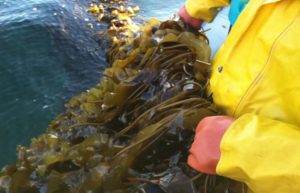 Producing large volumes of seaweeds for human food, animal feed and biofuels can represent a transformational change in the global food security equation and in the way we view and use the oceans. In 2012, global production of seaweeds was approximately 3 million tons dry weight, and growing by 9% each year. As with the production of shellfish, seaweed farming is naturally restorative: it needs no feeding, and each harvest leaves the water cleaner.

Increasing the growth of seaweed farming up to 14% per year will generate 500 million tons dry weight by 2050, adding about 10% to the world’s present supply of food, while at the same time provide profitable investments that generate significant revenues while improving environmental quality and ocean health.

Assuming a conservative average productivity from the best operating modern ocean farms of about 1,000 dry metric tons per km2 (1 kg per m2), the required harvest to supply the projected world populations in 2050 is about 500,000 square kilometers of ocean surface.

This area is equivalent to 0.03% of the oceans’ surface area, or an area equivalent to 4.4 percent of the US exclusive economic zone. A challenge to the current generation of Americans is that “America can feed the world…develop ocean farms and forests on 5% of our Economic Enterprise Zone (EEZ)” and create 3 million direct jobs in the process. Perhaps this will be accomplished by a global coalition of like-minded stewards that understand that a sustainable planet requires transformation and change.

Production of Kelp forests on this scale would provide annual production of 50M metric tons (mt) of protein for food along with 15M mt of Algal Oil, rich in protein and nutrients. A simultaneous benefit resulting from this effort includes cleaner ocean water as the Kelp and related seaweed production will reduce 10M metric tons of excess Nitrogen, 1M mt of Phosphorous and 135M mt of Carbon, significantly reducing the Climate Change and Ocean Acidification.

This scale of Kelp distilled as biofuel would provide 1.25 Billion MW-hours of electricity while at the same time sparing 1M km2 of farmland and 500km3 of fresh water.

Atlantic Ocean Aquaculture (AOA) is currently seeking investment support in cooperation with Rabble, to develop and expand an initial 3D Ocean Farm in the Gulf of Maine. Rabble is a NYC organization that provides innovative crowd financing by connecting impact investors with innovative projects. AOA’s current offering is structured as a preferred equity offering, interested parties should review rabble’s website for important information and disclosures. This business model rapidly scales up farm production from 10A to 100A and larger over the initial 6 years of development.

AOA collaborates with the Climate Foundation in support of large scale Kelp forest development with advisory from Dr. Brian Von Herzen, an acknowledged world expert in the forefront of Marine Permaculture.

AOA consults for companies and organizations with large carbon footprints such as mining operations and power plants to offset and mitigate carbon. This is accomplished through the design and maintenance of Kelp forests on 20-year leases in offshore waters that provides measurement and metrics for sequestration of Carbon in support of corporations and municipalities with Carbon targets for Green Plans to meet Sustainability Goals. 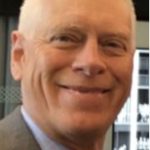 Roger Bason is CEO of Atlantic Ocean Aquaculture LLC. Roger has extensive experience with ocean-based projects over the past 20 years that include innovations in tidal and wave energy technology, site selection, field studies, permits and project development. He has led ocean research projects throughout the US and in the UK, Bermuda, Mexico, Russia and the Republic of the Marshall Islands. His experience includes work with Woods Hole Oceanographic Institution in the Galapagos Islands and the Bermuda Institute of Ocean Sciences.

Roger has taught graduate level courses on Tidal Energy at the School of International Public Affairs (SIPA) at Columbia University and has served as technical Advisor for the UN Small Island Developing States. He is an acknowledged expert and thought leader in the field of sustainable development and ocean energy and recently presented a lecture series at the Harvard Graduate School of Design on sustainable infrastructure, marine energy, coral reef recovery and shoreline protection.