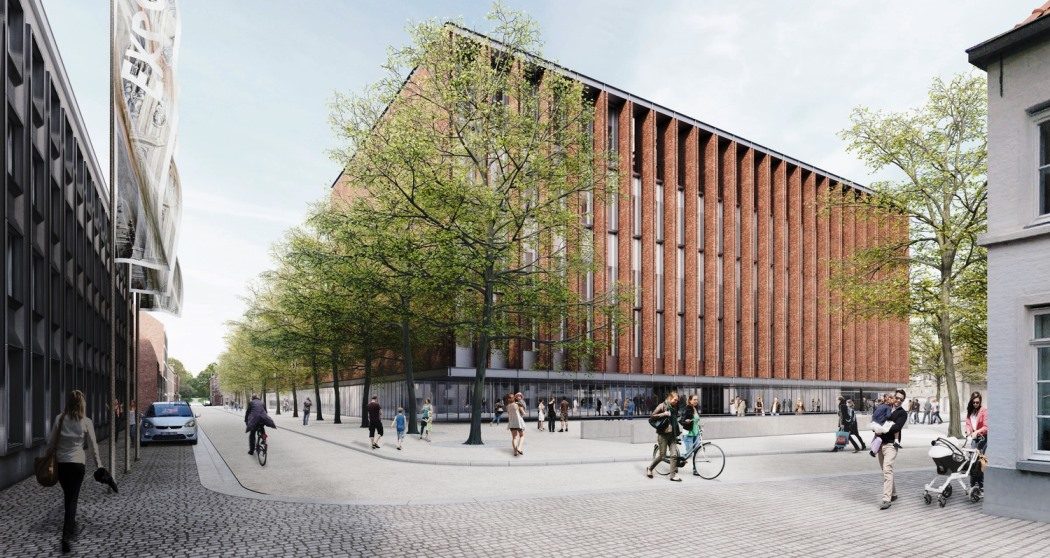 Fans of director Martin McDonagh‘s movies know Bruges, Belgium, thanks to his wickedly funny 2008 movie, In Bruges, starring Colin Farrell, Brendan Gleeson and Ralph Fiennes. The city itself could be considered one of the stars of the movie. 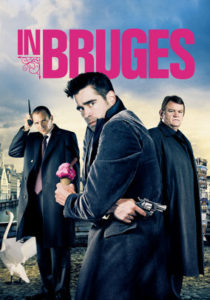 Those who are extremely fortunate have actually visited this charming place, which is one of the world’s most beautiful small cities. It’s sometimes referred to as the “Venice of the North”, due to its ubiquitous canals.

But there was one: the recently-demolished trade fair and exhibition hall in Bruges, which was originally intended to be a reception venue, was erected 50 years ago as a temporary structure.

In recent years it had become increasingly clear that it fell short of contemporary requirements in terms of building physics and programming. 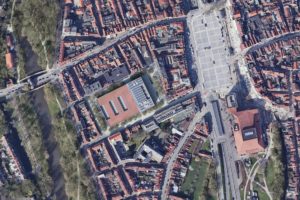 For this reason, the City of Bruges is commencing an urban regeneration project on the site. In addition to the construction of the new beursplein (an exhibition hall that converts into a covered public square), which is expanded with a congress building (congresgebouw), the entire site will also be renewed.

The combination of an exhibition hall and a conference centre creates a natural convergence between the two functions. Moreover, the addition of a conference facility not only addresses the demand for receiving groups of 500+ people in the heart of Bruges, but also enhances what Bruges can offer its visitors, with the city welcoming a mixture of conference delegates (particularly during the week) and tourists (especially on weekends). 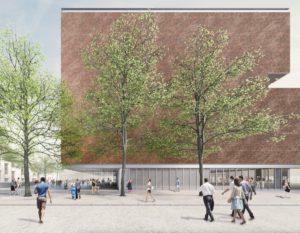 The preservation of the existing and highly-prized trees that has defined the Beursplein since many decades was a basic principle for the design team from the very outset.

Digging them up needlessly was never an option. This vision is an integral part of the strategy for the design of a new building that not only meshes with the city but also engages in an open dialogue with the neighbourhood.

The beeches on the beursplein are highly sensitive to any changes to their biotope. The Beurs Association will do all it can to protect them during the building works and seek advice from external specialists as well as the City of Bruges’ own Green Service. 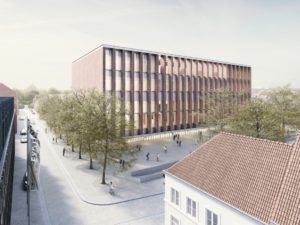 The team of architects – Eduardo Souto de Moura and META – have designed the exhibition hall as a covered and lockable square where all kinds of events – such as trade fairs and concerts – can take place.

But at the same time, when no activities are planned, the building can be transformed into a public covered square: one that is accessible to all passers-by and forms an integral part of the neighbourhood.

The opening up of the exhibition hall’s external walls to create a covered public square during fallow periods is a logical move. This urban renewal project delivers a building that is both neighbourhood-orientated and urban, which will be a pleasure to use, and bring a new dynamic to the district and wider city. 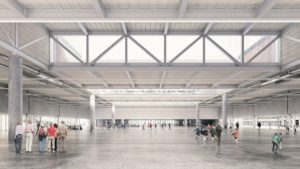 The Beursplein & Congresgebouw are linked by a common entrance and can be used simultaneously or as completely independent facilities. While the exhibition hall is organised horizontally, is grafted onto the neighbourhood and is immediately accessible from the outside, the congress hall is stacked vertically.

This latter volume, which can accommodate at least 500 people, is designed according to the ‘three-chairs principle’: a conference delegate is allocated a seat in the plenary hall, in the meeting rooms and in the catering space. This dining area is adjacent to a terrace that offers an unparalleled view of the Bruges skyline.

The Beursplein & Congresgebouw in Bruges has a robust and solid appearance and is made of recycled brick. The entire building rests on a glass pedestal with metal frames and fixtures, which enhances the transparency of the ground floor and emphasises the public character of the covered square. 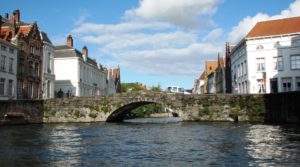 One of the city’s many canals.Photo credit: Storm Cunningham.

The Beurs Association is the team charged with realizing the Beursplein & Congresgebouw in Bruges. The team is led by the construction group CFE, which acts as the contractor and whose subsidiary company, MBG, is responsible for the general contracting works. 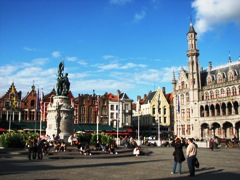 META has won several architectural prizes including the Belgian Architecture Award and the Belgian Building Award. In 2016, the Flemish Housing Association [VVH] awarded the Inspiring Social Housing Prize to the Gildenhuis in Beveren. Some recent projects from META: buildings O and M for the University of Antwerp, Cadiz homes and offices in Antwerp, Kindergarten Xaveriuscollege in Borgerhout, social housing Klapdorp in Antwerp, redevelopment of the Normaalschoolsite in Lier and rooftop greenhouse Agrotopia in Roeselare.

All images courtesy of META Architectuurbureau unless otherwise credited.