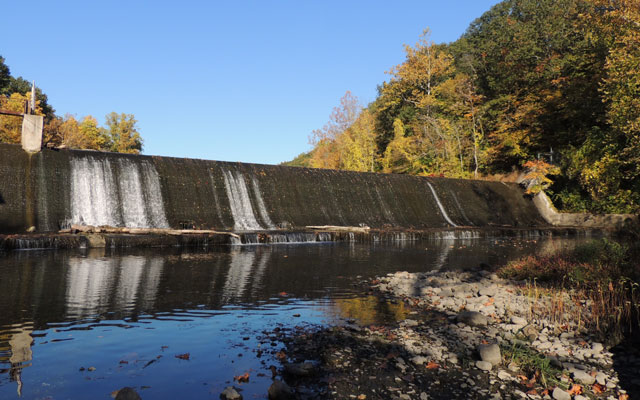 In June of 2018, Barbara Brummer, the New Jersey state director for The Nature Conservancy (TNC) discovered hundreds of shad in a pool at the Columbia Lake Dam on the Paulins Kill, the third largest tributary of the Delaware River.

The hydropower dam has been blocking their spawning migration for 109 years, yet still they returned, hoping to someday find the monstrosity gone. “Come back next year!” Brummer called to them. She’s working on an $8 million project to help restore the Paulins Kill by removing the dam. 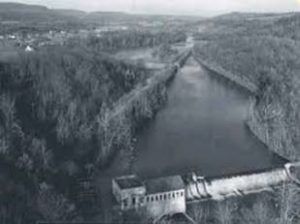 The project will restore important habitat for migratory fish, primarily American shad and American eel, and will enhance the public’s recreational enjoyment of the Paulins Kill, a tributary of the Delaware River. “This project will benefit the public by making it easier for kayakers and canoeists to access a large stretch of the river and will enhance the experience of visitors fishing, hiking, hunting and enjoying this scenic area,” said New Jersey Division of Fish and Wildlife Director Larry Herrighty.

For years, removal of the 18-foot-high Columbia Lake Dam has been one of the highest-ranking projects of its kind in the nation for The Nature Conservancy, a nonprofit conservation organization.

“It is a special kind of satisfaction to know that after more than 100 years, American shad will no longer ‘bump their noses’ on the Columbia Lake Dam when they return to spawn and that people will have a cleaner, healthier waterway for recreation,” said Brummer. 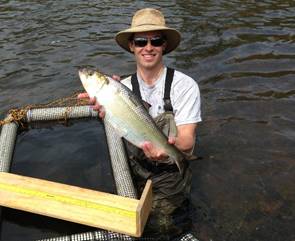 The primary source of funding for the Columbia Lake Dam removal project is $5 million from Natural Resource Damage settlements secured by the DEP’s Office of Natural Resource Restoration. These are settlements that polluters pay for harming natural resources and are in addition to any money they spend on remediating pollution.

The Nature Conservancy is providing an additional $1.4 million. The U.S. Department of Agriculture’s Natural Resource Conservation Service, the U.S. Fish and Wildlife Service Fisheries Program, the Corporate Wetlands Restoration Partnership and the National Fish and Wildlife Foundation are funding the balance.

“Since 2009, the U.S. Fish and Wildlife Service has worked with partners from Maine to Virginia to remove more than 500 barriers to fish passage, helping to reconnect 4,000 miles of rivers and streams and improve fish populations,” said U.S. Fish and Wildlife Service Northeast Regional Director Wendi Weber. “Columbia Lake Dam is the latest milestone and we are eager for the surrounding communities to enjoy the benefits, such as improved recreational fishing and boating, and better water quality.”

This apparent resurgence is likely the result of improved water quality in the lower river, years of efforts to manage the recovery of the species, and the restoration of tributaries through dam removals.

The Columbia Lake Dam, situated near the confluence of the Paulins Kill and the Delaware River, was built in 1909 by the Warren County Power Company. The 330-foot-long dam impounds the narrow, 43-acre Columbia Lake that stretches for 1.5 miles and is part of the New Jersey Division of Fish and Wildlife’s Columbia Wildlife Management Area.

As part of the preparations for the dam removal, the Division of Fish and Wildlife lowered the lake, removing and relocating a small number of fish and freshwater mussels. The DEP’s Office of Natural Resource Restoration is spearheading the project for the state. 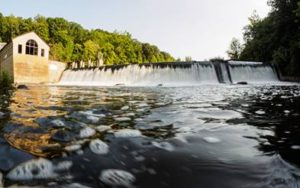 “This project, part of a larger effort to restore rivers in the state to free-flowing conditions by removing obsolete dams, is a fine example of partners working collaboratively and innovatively to enhance a natural resource,” Commissioner McCabe said. “The removal of this dam will restore the ecological diversity of the Paulins Kill, opening a 10-mile stretch of the river to fish passage for the first time in more than a century.”

This species is anadromous, meaning it spends much of its life in the ocean and estuaries but needs access to freshwater for spawning. Water quality improvements over the years in the Camden and Philadelphia area made it possible for shad to move farther up river but dams built to generate power, for mills and other now-obsolete purposes greatly reduced their spawning habitat.

American eel is known as a catadromous fish, meaning that it spawns in the ocean but spends a great deal of its life in rivers and their tributaries. American eels spawn in an area of the North Atlantic surrounded by the Gulf Stream known as the Sargasso Sea.

The project began with the removal of the partial remnants of a previous dam just downstream of Columbia Lake. Following this, the Columbia Lake Dam will be notched to allow full lowering of the lake. After additional work to protect upstream bridges is completed, the dam will be fully removed.

Historical records from the 1700’s indicate that shad historically used the Paulins Kill and current surveys indicate that the species congregates at the base of the Columbia Lake Dam. Warren County Power Co. ceased operating the dam for power production in 1955, when the land was sold to the state.

The DEP is working with partners on plans to remove the Paulina Dam owned by Blairstown Township. Removal of this dam, located nine miles upstream of Columbia Lake Dam on the mainstem of the Paulins Kill River, would open additional habitat for fish.

All photos courtesy of NJ Division of Fish and Wildlife, except the Featured Photo, which is courtesy of TNC.

Watch a Division of Fish and Wildlife drone video.