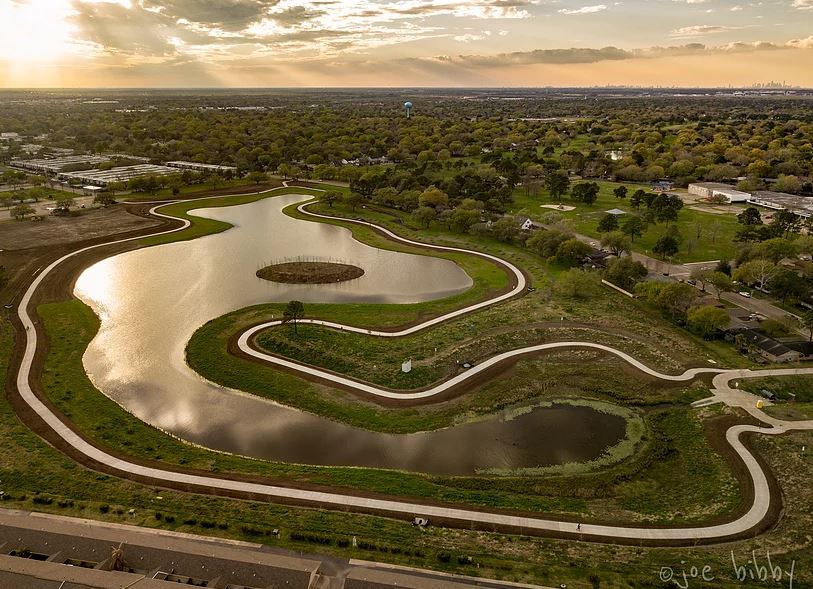 In Clear Lake City, Texas, Texas A&M University‘s AgriLife entities have been major participants in repurposing and renewing a dead golf course into something useful and healthful: the Exploration Green Nature Park, located about a mile from the Johnson Space Center.

Exploration Green was selected to receive the award through the 2018 Excellence in Green Infrastructure awards program. The program is a partnership of the U.S. Environmental Protection Agency and the National Association of Flood and Stormwater Management Agencies, or NAFSMA.

In July of 2018, this multifaceted project to help reduce flooding and provide recreation for thousands of residents of received the 2018 Excellence in Green Infrastructure Award. It could almost be considered a brownfield project, since most golf courses are highly contaminated with pesticides and herbicides, and pollute nearby waterways via excessive use of artificial fertilizers.

“Exploration Green transformed an out-of-use golf course into a 200-acre nature park and stormwater detention facility,” said Dr. John Jacob, Texas A&M AgriLife Extension Service specialist with the recreation, park and tourism sciences department of Texas A&M University in College Station. “For more than a decade we have been involved in the planning and implementation of actions to repurpose this golf course and surrounding area into a green space with water detention features and recreational areas.”

Jacob, a Houston resident, said the wetlands in Exploration Green were designed to detain and slow floodwaters and clean the runoff from 95 percent of the storms that occur in the community. Additional provisions were added for a walking trail, lake, wetlands areas and other features.

The award was announced earlier this month at the NAFSMA annual conference in Santa Fe, New Mexico. According to coordinators, the Green Infrastructure Awards Program was designed to recognize and spotlight stormwater management projects throughout the country that are advancing and innovating green stormwater infrastructure techniques.

“The 178-acre golf course ran alongside large drainage ditches constructed by the original developer, providing a perfect setting for accommodating additional runoff,” Jacob said. “The first phase of Exploration Green was about 80 percent completed when Hurricane Harvey hit and the detention area held enough stormwater runoff that even houses that habitually flooded with just 5 to 10 inches of water storms didn’t flood with the 45 or so inches that came with Harvey. This project shows that Houston can build developments that don’t flood.”

John Branch, board president of the Clear Lake City Water Authority, which owns Exploration Green, said this kind of detention, combined with the wetlands and native landscapes and nature trails is what real resilience is all about. “The involvement of the Texas A&M through its Texas Community Watershed Partners was critical to the success of the overall project,” he said.

Water quality studies, funded by a grant from the Texas General Land Office Coastal Management Program, will begin in October to monitor and document water quality changes provided by the stormwater wetlands.

Excavation of the park’s second phase is currently underway and will include development of a lake with stormwater wetlands, a mile of hike and bike trails and the reforestation of native trees. All phases of the project are expected to be complete in 2022.

To learn more, call Paul Schattenberg of Texas A&M at 210-859-5752, or email him at paschattenberg@ag.tamu.edu