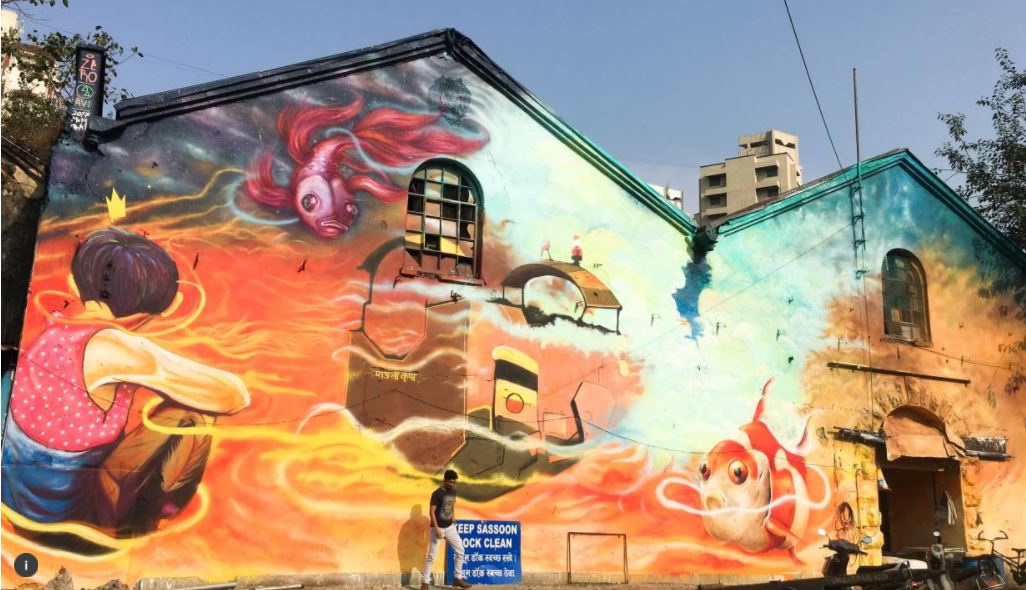 It was a trip few Mumbai, India residents had made before – to a smelly dock on murky waters in the city’s southern tip, to see colourful art installations inspired by the fishing community, the city’s original residents.

The Sassoon Dock Art Project, which ran until the end of December, gave many Mumbai residents their first excuse to walk through one of the city’s oldest docks, an area set for a massive overhaul under a plan to redevelop the docklands.

As reported here in REVITALIZATION back in May of 2017, Mumbai is about to unveil an ambitious plan to redevelop its vast docklands, sprawled across 752 hectares (1880 acres) along a 14-kilometer stretch of waterfront.

The proposed redevelopment is the biggest opening up of land in the city since the since the redevelopment of about 600 acres of textile-mill lands in the heart of Mumbai in the 1990s. They are located along a 14 km (8.7 miles) stretch along the waterfront, dotted with defunct warehouses, jetties and slums.

That redevelopment was meant to create equal quantities of open spaces, public housing and commercial real estate. Instead, it drove tens of thousands of mill workers from their homes, as planners prioritized offices, bars, malls and multi-storied parking, according to campaigners who fought for their rehabilitation.

Two decades on, this docklands redevelopment offers perhaps the last chance for a more sustainable and inclusive future for residents in the space-starved city, home to some of the priciest real estate in the world, experts say.

“It is absolutely essential that we get it right this time – this is the last big chance to seriously tackle the challenges that Mumbai faces,” said Bimal Patel, urban planner and president of CEPT University in Ahmedabad. “The development can, and should, adopt an urban design model that does not falsely and needlessly pit real estate development and the creation of new floor space against public interest,” he told the Thomson Reuters Foundation.

The revival of docks in these five cities could serve as a model for Mumbai:

The Spanish city used the 1992 Summer Olympics to redevelop its waterfront, demolishing old warehouses and industrial buildings and creating 3 km of beachfront and a modern marina. New housing blocks were built, public spaces were refurbished and the area began to attract students, artists and lately, migrants.

When the Thames shipping business moved downstream to Tilbury, more than 2,000 ha of port facilities were left derelict.

The London Docklands Development Corporation was set up to ensure long-term social and economic regeneration. The “Docklands” is now made up of offices, shops, housing, leisure facilities and transport links, despite criticism that the regeneration favoured businesses.

The city has served as a port since its founding in 1863. A long-term project to redevelop the port was launched in 1997, and is still a work in progress, with the active participation of residents and businesses.

Port activities began at the Singapore River in the early years of the city’s founding by Sir Stamford Raffles in 1819.

During the 1970s, as port activities were moved out, the government decided to retain the old façade along the river, ensuring the shop houses and godowns along Boat Quay and Clarke Quay were not only preserved, but enhanced, leading to a vibrant residential, commercial and civic district. The city similarly redeveloped old port land in the southern waterfront area.

From the 1800s, Darling Harbour was the working port for Sydney, home to shipyards, factories, warehouses and crowded slums.

After the last goods train departed Darling Harbour in 1984, a plan was hatched to redevelop the former rail yards and wharves into recreational and commercial facilities. Four years later, the area was opened up to the public as an as entertainment and shopping precinct.

This article by Rita Chandran was originally published by Thomson Reuters Foundation on Trust.org. Reprinted with permission.