Next time you drink a bottle of Buxton mineral water (assuming you’re in Britain), take a moment to consider the fact that the water was drawn from a natural spring located just a few meters below one of the most complex and demanding refurbishment projects currently under way in the UK.

The £50 million redevelopment of Buxton Crescent will see main contractor Vinci Construction restore and expand a historic Georgian-era masterpiece into an 80-bed five-star hotel, and reopen the adjoining, equally-historic Natural Baths to the public for the first time in almost 50 years. 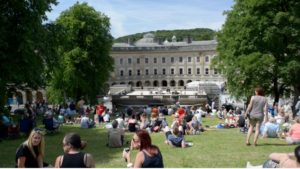 The buildings stand directly above a network of ancient thermal springs, including the only source of natural mineral water used by Nestlé’s state-of-the-art bottling plant. As if that wasn’t enough of a challenge, the team is engaged in constant redesign as ongoing survey work inside the main Crescent building reveals an array of unexpected structural anomalies and extensive timber rot.

“It is constant surprises with this building,” says John Ferguson, senior architect and contract administrator at studio Curious Worldwide. “You think you know it, then you peel away the plasterwork and see that the wall has apparently been filled with whatever previous builders had to hand, and you think: my God, how did it ever stand up?”

Buxton’s source of water has featured throughout the town’s history which extends to Roman times. Known as Aqua Arnemetiae, it was an important settlement and resort, having one of only two sets of warm springs substantially developed by the Romans, the other being at Bath. Although falling into relative obscurity later, it served as a medieval place of pilgrimage due to the thermal springs. The town was developed as a fashionable spa town in the late 18th century. Its biggest expansion coincided with the arrival of the railways in the mid-19th century. By the end of the 19th century it was a significant inland resort and centre for hydrotherapy and other water-related treatments.

The Crescent was erected between 1779 and 1789, to the design of John Carr of York. It was built to provide good quality accommodation in the town and was intended to become the principal attraction and centrepiece of the Fifth Duke of Devonshire’s attempts to make Buxton vie with Bath as a spa of national importance. It was serviced by the Great Stables, also by Carr, situated to the north of the Crescent, which later became the Devonshire Royal Hospital and is now the Buxton campus for the University of Derby. 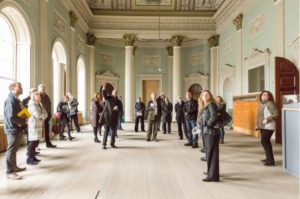 Due to its declining state of repair and following action by High Peak Borough Council working in tandem with English Heritage and the (then) Department of National Heritage, the St Ann’s Hotel was eventually bought by the Council in 1992 using funds from the National Heritage Memorial Fund. A £1.5 million programme of urgent works on the Crescent followed during 1994-96 funded by English Heritage. This replaced the roof on the former St Ann’s Hotel, undertook essential stonework and joinery repairs as well as some major internal structural works.

In terms of finding a new use for the buildings, the private market was failing to bring anything forward that would be compatible with the buildings’ listed status whilst being commercially viable. Consequently, High Peak Borough Council and Derbyshire County Council decided to promote their own project and, in particular, one that would add to the heritage-led regeneration of Buxton.

This led to the launch of the Buxton Crescent and Thermal Spa project for which the Councils were pleased to enter into a partnership with the Trevor Osborne Property Group and CP Holdings Ltd. CP Holdings Ltd are the outright owners of the Danubius Hotel and Spa Group – Europe’s largest hotel and spa operator.

Since their appointment in 2003, the partners have been working on the present project and seeking funding to offset the enormous conservation deficit – this is the cost of the repairs and restoration works that have no commercial value. Despite a number of setbacks, not least the withdrawal of £5 million of funding following the abolition of the East Midlands Development Agency in 2010, the Buxton Crescent and Thermal Spa project is now fully funded, has all of the necessary permissions and is soon to start its main construction contract on site.