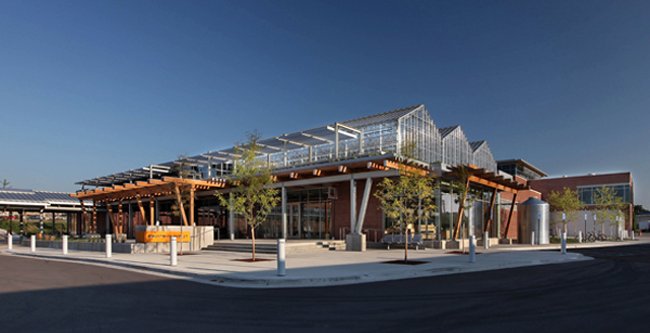 It is located just south of the downtown business district in Heartside, one of the area’s most challenged neighborhoods, which is home to food pantries, homeless shelters, and social service organizations. The market seeks to link urban communities with the 13,000 farms in 11 surrounding counties, and to attract a diversity of customers and additional investment to the southern edge of downtown Grand Rapids.

The state-of-the-art, award-winning facility is the first LEED Gold–certified public market in the country.

The Grand Rapids Downtown Market was made possible through a public/private partnership led by Grand Action, a not-for-profit organization that has revitalized downtown through investments in major projects such as the new $75-million Van Andel Arena and renovation of the historic Meijer Majestic Theatre. “The city seeks to be a community of the future, not the past,” says Dick DeVos, co-chair of Grand Action; the organization believes in “thinking boldly, planning collegially, and acting urgently.”

The $32-million market received funding from private donors and foundations, the City of Grand Rapids, the Environmental Protection Agency, and the State of Michigan. Local public agencies contributed infrastructure improvements including new streets and sidewalks, and enhanced public transportation access through the rerouting of bus routes.

The redevelopment has sparked $50 million in new investment in the neighborhood, including the conversion of two adjacent vacant warehouses into 170 units of affordable housing, helping to draw development southward from the downtown core. It has also has generated interest from over a dozen cities in the United States and Canada seeking to develop similar markets.

Since its opening in 2013, the Grand Rapids Downtown Market has become a beacon and source of civic pride for the city.