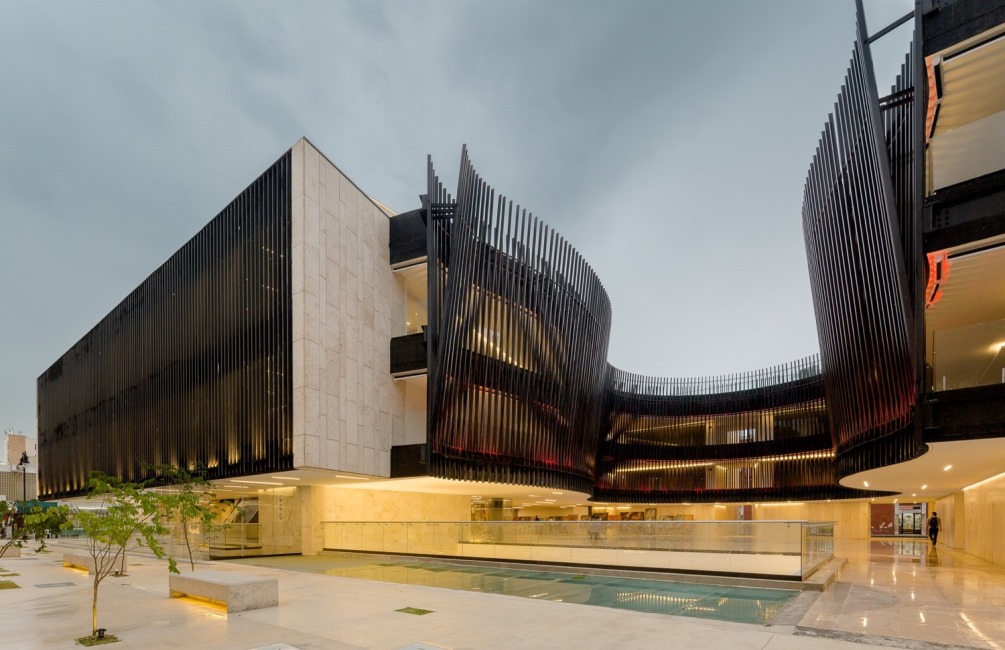 Anyone who really knows México loves it. Many Mexican cities are centers of art, dance and music, but Mérida, the capital of the state of Yucatán seems to be more visible about it than most. 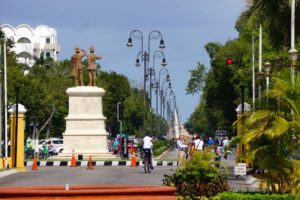 Merida is also the largest city of the Yucatán Peninsula. It’s in the northwest part of the state, about 35 kilometres (22 miles) from the Gulf of Mexico coast.

According to the 2015 census, the population of Mérida was 892,363, making it the 14th most populous Mexican city.

One of Mérida’s most-loved traditions is Mérida en Domingo (“Sundays in Mérida”).

It’s an all-day event (from 8am to 9pm) in the Plaza Grande every Sunday. Food stalls and pop-up restaurants proliferate in the plaza. As evening nears, bands start to play and people begin to dance. 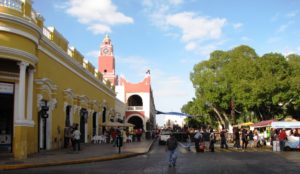 So, it’s only appropriate that Merida’s historic downtown is even further revitalized (it’s pretty darn vibrant already) by their new Palace for Mexican Music.

Truth be told, there are a few dead zones in the city center, and one of them has now been brought to life by this gorgeous new facility.

Here’s what the architects say about their creation: 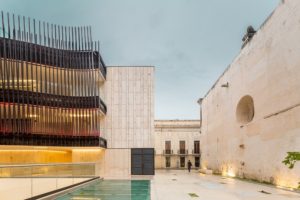 The architectural design for the palace for Mexican music can be defined as a modern building sensible to its physical context of great historical value.

Due not only because its location within the city but mainly because the nature of its program is public, it was conceived with the potential to revitalize and regenerate the part of the historical downtown where it is located.

The building is set to become a benchmark for state-funded public architectural projects. Its design is conceptualized as a catalyst for public space while recognizing the surrounding architectural heritage context. 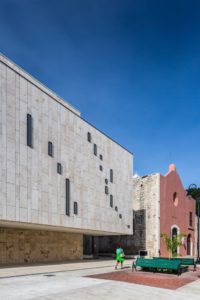 To achieve this, the building serves as a patio, a hinge and a terrace, which not only draws pedestrians to cross through the public space of the building, articulating the formerly known “Congress Alleyway” with the Hidalgo Plaza, as well as focusing the adjacent stone wall and the dome of the Third Order Temple built in 17th Century.

Finally, the rooftop works as a green terrace that reveals the magnificence and scale of the surrounding heritage buildings such as the Cathedral and the Third Order Temple.

The building comprises of 4 stories (1 underground and 3 above) divided accordingly for the three principal intended uses. The underground level has the interactive museum for Mexican Music, with 1200 sqm of exhibition space divided among six rooms, each with a particular theme, narrating the development and evolution of Mexican folk music from its origins to present day, highlighting its main genres.

Complementing the museum, this level includes a shop, storage areas and utility rooms. At street level, the building is mostly an open plan layout where pedestrians can walk through. 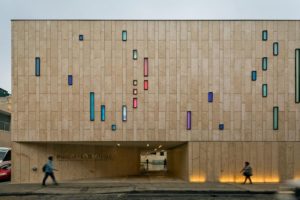 Additionally, this level features the entrance to the museum, the Concert Hall and the archive for the largest collection of recordings from the National Record and Music Library (Fonoteca Nacional) outside Mexico City, to which users will also have access digitally. The library has 650 sqm for storage and physical archive of original radio and video recordings collected throughout the years.

Aside from the entrance, on street level also has a central courtyard named “Patio of Strings” intended as a music performance space, open to the public and to the street, with the capacity of 400 people. 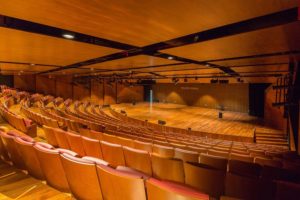 The main Concert Hall has the occupation capacity of 450 seats and features high-performance acoustic adjustable paneling to suit different styles of music. It also has all the facilities for people with disabilities, including the backstage and a professional recording studio.

Lastly, the rooftop is designed as a terrace with gardens to overlook all around sights like the Cathedral, the Third Order Temple, therefore creating a new memory of the heritage sites surrounding the project, from an urban perspective and from the fifth façade in a building standing in Downtown Merida. 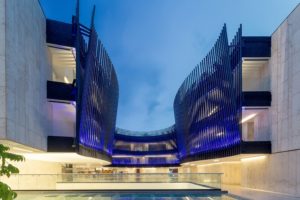 The spatial quality of indoors and outdoors like the composition and the architectural and urban relationship are essential premises for the design of the Palace for Mexican Music.

Tending to these topics the project seeks to establish a new precedent for a public building to contribute to the revitalization of its surrounding urban space, facilitating the free circulation of pedestrians and improving city connectivity, therefore improving the sense of place of the people for the heart of the city and with the Palace of Mexican Music.

All images are courtesy fo all images by Onnis Lunque unless otherwise credited.