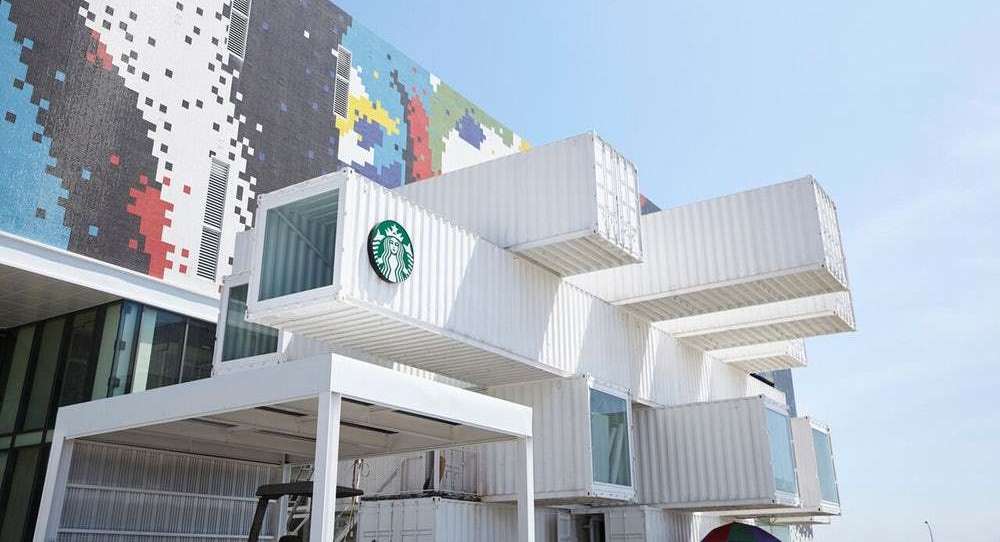 The fact that they are actually reused containers is significant. Those who have seen one of REVITALIZATION publisher Storm Cunningham‘s keynotes or workshops in recent years might have seen his discussion on shipping container construction.

In it, Cunningham points out that some developers treat shipping containers as a design fad, forgetting that the original idea was to reduce waste by repurposing and renewing what was destined for a landfill. As a result, some of them actually use brand new containers, revealing a striking level of cluelessness. And it gets worse: one entrepreneur in China is tapping the “clueless architect” market by manufacturing imitation shipping containers out of plastic.

This Starbucks is the first retailer to open a storefront in the yet-to-be opened Hualien Bay Mall, which is located in a tourist destination known for its cuisine and beautiful landscape facing the Pacific Ocean. 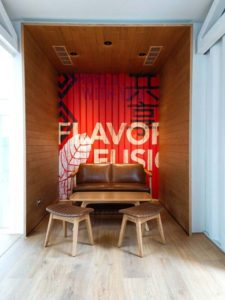 This unique exterior design was envisioned and brought to life by the famed Japanese architect, Kengo Kuma, who has also built Starbucks Japan’s Fukuoka store and is the exterior architect for the upcoming Starbucks Reserve Roastery in Tokyo.

This is the first time Kuma has used shipping containers for his designs. He says the form was inspired by the foliage of coffee trees, combined with the traditional Chinese bucket arch. The stacking of the shipping containers created a much taller space and provides natural sunlight through the various skylights found throughout the structure.

Inside the geometric space, customers find a tribute to the cultural vitality of Hualien. The brightly colored wall mural represents the aboriginal Amis peoples with deep heritage in the city.

Kuma designed the store to help bring people together over coffee. Inside, the containers feature create warm and comfortable seating areas for customers. From one end of the container, customers can enjoy views of the beautiful mountain range. The other end is decorated with graphics that tell coffee stories.

Starbucks is committed to building sustainable stores and recently announced the “Starbucks Greener Stores” initiative which will be a framework to design, build and operate sustainable stores around the world. This new store joins a suite of Starbucks locations built from shipping containers.

In the US, Starbucks has opened 45 of these pre-fabricated modular stores, built off-site prior to delivery and installation, creating an opportunity for the company to extend into sites not designed for traditional store locations while minimizing the environmental footprint generally associated with new buildings. Through these store formats, Starbucks is able to reuse reclaimed materials throughout the design.