On February 3, 1959—“the day the music died”—Lubbock, Texas native Buddy Holly—along with Ritchie Valens and J. P. “The Big Bopper” Richardson—died in a plane crash as they flew from a gig in Iowa to a gig in North Dakota during a snowstorm. 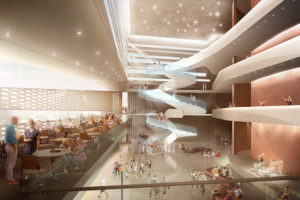 Now, over half a century later, Lubbock is well into a $154 million project designed to both commemorate Holly’s legacy and revitalize their downtown.

In 2012, the CH Foundation and the Helen Jones Foundation worked with the Chamber of Commerce of Lubbock and then Garfield Public/Private of Dallas to research what Lubbock needed in order to regenerate the city.

Their conclusion? A performing arts center, which will be called the Buddy Holly Hall of Performing Arts and Sciences.

To make it happen, they created the non-profit Lubbock Entertainment and Performing Arts Association (LEPAA). 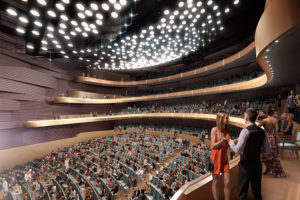 “This is going to outshine anything that’s here,” says Gerald Dolter, professor of voice and music theatre director in the Texas Tech School of Music.

He added that Texas Tech will be using the Hall for the School of Music programs, opera and maybe the annual Christmas time Madrigal Feast.

Dolter said he is confident this hall would mean the “revitalization of Lubbock. The city will benefit because when that Hall is built, it happens every place in the United States,” Dolter said.

“It happened at Myerson Hall in Downtown Dallas: you put a theatre up, downtown, and there are restaurants that move in, there are hotels that are built, and they pay taxes, they pay city taxes. People come from all over the country to see shows, and they spend hotel nights,” he concluded. 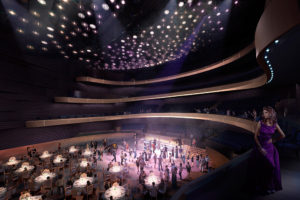 In the 1950s, this Lubbock teenager sparked a cultural revolution with his music, songwriting, and big framed glasses. Today, The Buddy Holly Hall of Performing Arts and Sciences continues his legacy by revolutionizing performing arts, entertainment and education.

Resulting from years of community studies and focus groups and located in the heart of Downtown Lubbock, The Buddy Holly Hall of Performing Arts and Science is a unique model, not found anywhere else in the world. The state-of-the-art campus features two theaters, event space, a full-service bistro and a ballet academy under one roof.

Designed by internationally-renowned Diamond Schmitt Architects, both theatres feature an acoustic value of NC15, offering both renowned artists and young aspiring artists the opportunity to perform on stage in a world-class venue. Site lines will be amazing from anywhere within the theater. 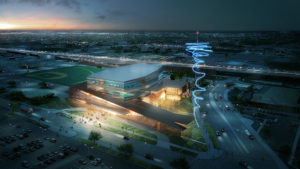 One of the most interesting features of The Buddy Holly Hall is the iconic guitar wall.

Designed by Texas artist Brad Oldham, the image is a 9,000 piece sculpture made of multiple sizes of guitar picks beautifully cast of aluminum with brushed bronze.

Read article by Michelle Bless in the Daily Toreador.