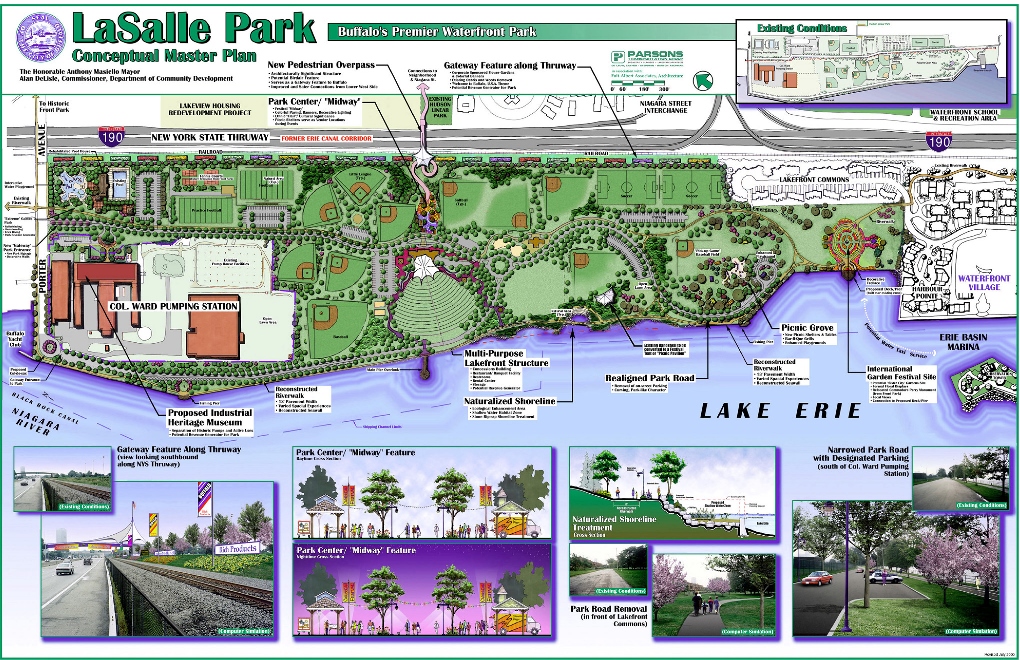 On October 17, 2018, the Ralph C. Wilson, Jr. Foundation announced a $200 million investment in restoring and renovating parks and trails in Southeast Michigan and Western New York.

“Parks and trails have an amazing, unparalleled power to rejuvenate communities, and I thank the Ralph C. Wilson, Jr. Foundation for their extraordinary gift in further enhancing these parks and public spaces,” said New York State Parks Commissioner Rose Harvey.

The gift honors the Foundation’s namesake, Ralph C. Wilson, Jr, on the 100th anniversary of his birth and celebrates his legacy in the communities he was most devoted to. The funds will be split evenly, dedicating $100 million to each region to help develop signature legacy parks, advance the vision of completed regional trail systems, and support the sustainability of these public spaces.

“We are proud and honored to celebrate Ralph’s birthday today with a lasting gift that matches in scale the passion and pride he had for his hometown of Detroit and ‘adopted’ hometown of Buffalo, where he founded and owned the Buffalo Bills,” said Mary Wilson, widow of Ralph C. Wilson, Jr. and life trustee of the foundation. “Ralph was committed to exercise, staying active and enjoying life. It would make Ralph so happy to see people of all ages enjoying these enhanced parks and trails for years to come.”

The signature parks will be created at both West Riverfront Park in the City of Detroit and LaSalle Park in the City of Buffalo. Each will be renamed Ralph C. Wilson, Jr. Centennial Park. For both locations, the Foundation is committing $40 million for construction activity and $10 million to support the broader efforts for long-term sustainability.

“Through the years, there have been many organizations and funders who’ve worked hard to develop these parks, trails and waterfronts in both Southeast Michigan and Western New York. We’re honored to join with them in the continuation and acceleration of that work,” said David Egner, president and CEO of the foundation. “The signature parks mirror each other in many ways, with both situated at the ‘front door’ to each city and region along an urban waterfront and international border. Each park also serves as an anchor to a larger, more robust and burgeoning regional greenway system, connecting to other parks and neighborhoods, encouraging access for all.”

In addition, to help achieve the vision of a completed and connected regional trail system in both communities, the Foundation will invest $50 million in trails in each of Southeast Michigan and Western New York. For each, $40 million will be allocated toward yet-to-be determined projects that close physical gaps in each region’s trail systems and $10 million will be designated toward helping operate and maintain the trails for decades to come.

“Ralph Wilson is an iconic part of the history of Buffalo and Western New York, and we are fortunate that his spirit lives on through generous philanthropic efforts,” said Lieutenant Governor Kathy Hochul. “When I’m in Buffalo, a bike ride through LaSalle Park is part of my regular routine. This park has amazing potential. LaSalle Park is a place where families from around the world gather to enjoy the waterfront, play sports, and enjoy camaraderie. In celebrating the legacy of Ralph Wilson, we are grateful to the Foundation’s commitment towards LaSalle Park and our parks and trail systems within the region.”

In Detroit, the Ralph C. Wilson, Jr. Centennial Park will be at the current site of West Riverfront Park, a 22-acre site along the Detroit Riverfront. The new park is part of the Detroit RiverFront Conservancy’s overall vision to develop five-and-a-half miles of riverfront from the Ambassador Bridge on the west to Gabriel Richard Park, just east of the MacArthur Bridge to Belle Isle.

“With this incredibly generous gift, the Wilson Foundation will help us create a spectacular riverfront park and recreational opportunity that will be enjoyed by Detroiters for the next 100 years,” said Mayor Mike Duggan. “Equally important is making sure that residents in our neighborhoods have easier access to their city’s riverfront through projects like the Joe Louis Greenway. The Wilson Foundation was an early supporter of this effort and we are thrilled that the other half of the foundation’s gift will go toward filling gaps in regional trails connecting the city and region.”

In 2017, the Foundation provided support to the Detroit Riverfront Conservancy to lead a community-driven international design competition for the West Riverfront. The Conservancy has held more than 20 public meetings and created a Community Advisory Team of Detroiters who visited New York, Chicago and Philadelphia to bring back ideas for the future park.

As a result of the international design competition, Michael Van Valkenburgh Associates (MVVA), a New York-based landscape architecture firm, was selected as the winning firm of the competition.

“This generous gift honoring the legacy of Ralph C. Wilson, Jr. is recognition of the Conservancy’s success in transforming the riverfront into a gathering place for all. This work is possible through the involvement of our community and our funders. The creation of this new park will be one of the most significant public space projects undertaken in our city’s history, and it will provide tremendous benefits to youth and families in our community—and throughout the region—for generations to come,” said Matt Cullen, Chairman, Detroit RiverFront Conservancy.

In Western New York, the Ralph C. Wilson, Jr. Centennial Park will be located at the current site of LaSalle Park, the City of Buffalo’s largest waterfront park. For years, the City of Buffalo and the community have envisioned something more for LaSalle Park, and earlier this year the Foundation provided a grant to support a community engagement process to further the vision for the park.

The planning grant has allowed for greater community conversation around what an enhanced LaSalle Park experience could look like, if and when renovation funds were to become available. This community engagement process has been led by the City of Buffalo and the University at Buffalo Regional Institute. The partners have helped to ensure the effort is comprehensive, sincere, inspirational and above all, inclusive.

“Ralph Wilson was one of our city’s greatest champions. His vision illuminated our landscape and his humanity enriched our community. Today Mr. Wilson’s commitment to the City of Buffalo lives on through the Ralph C. Wilson, Jr. Foundation. We are extremely grateful for this generous donation that will enhance the quality of life for generations of Buffalo residents as they enjoy expanded, inclusive access to our city’s waterfront and everything that Ralph C. Wilson, Jr. Centennial Park has to offer,” said Mayor Byron W. Brown.

To prepare for this landmark $200 million gift, the Foundation hired James (J.J.) Tighe as director of parks and trails in 2017. Since his hiring, Tighe has been working diligently to assess the opportunities across both regions and work closely with local, regional and state partners. The data he captured has helped the Foundation make informed decisions regarding these projects, and others. Prior to today’s announcement, the Foundation had invested a total of $25 million in parks and trails across both regions.

The Ralph C. Wilson, Jr. Foundation is a grantmaking organization dedicated primarily to sustained investment in the quality of life of the people of Southeast Michigan and Western New York. Prior to his passing in 2014, Mr. Wilson requested that a significant share of his estate be used to continue a life-long generosity of spirit by funding the Foundation that bears his name. The Foundation has a grantmaking capacity of $1.2 billion over a 20-year period, which expires January 8, 2035.

“Parks and trails have an incredible impact on communities – inviting usage from all ages, neighborhoods and people – promoting inclusiveness and breaking down barriers. They not only connect people to each other, but to other destinations and assets across a region,” concluded Jeffrey Littmann, life trustee and board chair of the foundation. “These projects also take collaboration from all levels of community to be realized. It’s this teamwork and hard work that Ralph valued so much.”

Featured photo of Lake LaSalle courtesy of University at Buffalo.