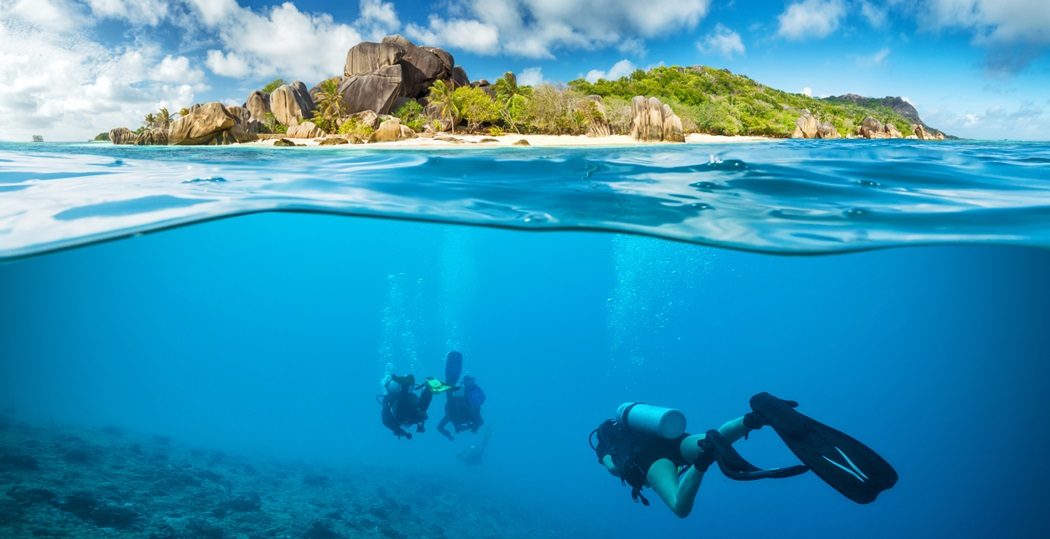 Anthropogenic influence on coral ecosystems is tremendous. Corals are dying because of bleaching, disease and weakness. This is due to ocean warming and acidification caused by climate change. The recent Intergovernmental Panel on Climate Change report paints an ominous picture of coral’s future, projecting a 99 percent decline by 2050. Urgent action is critical to prevent dire consequences. 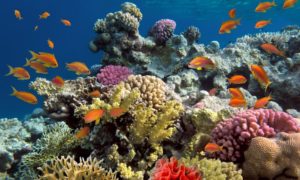 The Marine Conservation Institute reported that only 2.8 percent of the ocean is protected today. This is far from the 20 to 30 percent recommended by International Union for Conservation of Nature as necessary to safeguard marine life.

That would require $18.8 billion USD per year, according to a 2004 research paper from University of Oxford. Yet only $1.9 billion USD has been committed toward coral conservation between 2010 and 2016, UN Environment reports.

Clearly, coral ecosystems are intrinsically linked to the global economy. A future without reefs will make the seafood market plummet. They will also cause massive losses for real estate developers and investors and a dramatic decline in tourism. It is therefore in the best interest of market systems to support coral restoration.

Key players spurring action in coral financing and restoration in the face of this crisis are Swiss Re, Coral Vita, Blue Finance, and GRID-Arendal.

Rather than compensating for the loss of coral, the fund makes payments for the immediate replanting and restoration of coral in the event of a hurricane. Hotels are key beneficiaries of the natural barrier provided by healthy coral that protects coastlines and beaches. As such, hotel operators are the primary contributors of premiums to this insurance scheme.

Coral Vita is a for-profit organization restoring threatened reefs by growing and transplanting resilient coral. It is the first privately held, land-based, commercial-market restoration company to have successfully raised a seed round of $1.1 million USD from a mix of conservationists, investors and incubators.

Blue Finance is an intermediary organization that designs and implements financing mechanisms for marine ecosystems. GRID-Arendal is a Norwegian foundation working closely with UN Environment to support Blue Finance in its engagement with stakeholders.

These are some trailblazing initiatives being undertaken in coral restoration today; maybe more will follow.

Sam Teicher, founder and chief reef officer of Coral Vita, said investor education is therefore crucial.  “It was not clear to investors upfront about the value of reef restoration,” Teicher said. It is important to demonstrate how coral rehabilitation can “jumpstart a whole restoration economy to build resiliency, protect local communities, and keep reefs healthy so they can continue generating all that [economic] value.”

“One of the things we get asked about is that corals are dying. So what’s the point of planting them again?” Teicher said. “It’s a fair question – and there are a number of things we do to hedge against that risk.”

Teicher said Coral Vita worked with Ruth Gates, research professor and director at the Hawaii Institute of Marine Biology, to incorporate projections of ocean temperatures into growing coral more resiliently. Gates passed away this October. By accounting for such risks, he said, Coral Vita is able to achieve “viable, large-scale, and financially feasible restoration.”

Indeed, private sector understanding of ecosystem services is vital to the restoration economy.

For Swiss Re, the decision to participate was clear. According to Alex Kaplan, head of North America and senior vice president of global partnerships at Swiss Re, “Our greatest level of understanding is around hurricane exposure. We were able to quantify the risk, determine who bears the risk, and help them manage that exposure.”

In the insurance industry, Kaplan said, no one had previously focused on “recovering a natural asset.” By “insuring against an outcome or circumstance as opposed to indemnifying a loss,” Swiss Re can “insure corners of the globe that have never been protected before.”

Tanya Bryan, programme leader of ecosystems, economies and sustainable development at GRID-Arendal and conservation finance associate at Blue Finance, said it is important to craft a compelling investment story. The goal is to make it easy for people to “see themselves directly benefiting from ecosystem services.” Of course, she emphasized, “the first step is to show that it is a profitable and safe investment area.”

Teicher said that “investors are looking at how we can scale impact and still be financially sustainable.” Typically, coral farming is done by nonprofit marine research institutes relying on grants and donations that are not large enough to address the scale of the challenge. “That’s why we started Coral Vita as a mission-driven business. Investors recognized our philosophy and saw that we had the pathway and revenue needed to be a viable company.”

One of the “core tenets” of insurance is understanding the “economic value of an asset,” said Kaplan. He noted that The Nature Conservancy initially determined that “a vibrant coral reef was able to absorb 97 percent of wave energy.”

With that information, Swiss Re modeled the impact a reef could absorb during a storm event. Without reefs, the storm “would theoretically destroy the beach – and beaches are obviously the life blood of hotels,” Kaplan said.

Making this link clear to stakeholders is vital to the success of this mechanism.

There is a strong need to apply novel financing mechanisms and business models to prevent the catastrophe facing coral.

Kaplan said there may be further innovation going forward. “I believe we will start to embed predictive capability into the insurance mechanism to prevent loss from occurring in the first place.” Swiss Re is already applying this to livestock in Kenya using satellite technology to predict when cows are at risk of dying from drought, enabling farmers to take pre-emptive action.

Such innovations have not yet been integrated into donor support. For example, the recent $443.3 million AUD federal grant to the Great Barrier Reef Foundation epitomizes the traditional mode of funding. Perhaps innovative financing mechanisms are better suited for the purpose of leveraging greater private-sector capital and reducing the burden on public-sector funding.

Bryan said that “philanthropy is just not enough in its traditional form.” One-off funding cannot sustain “long-term maintenance costs for marine parks and other conservation efforts.” However, she said, blended finance is important. “I know that many aspects of conservation aren’t suited for investment, as they can’t pay back the return. And that’s where philanthropic donations would step in.”

Through new business models, innovation is about finding unique ways to fill market gaps. According to Teicher, “What’s different about Coral Vita is its use of land-based coral farming.” Traditional projects are small-scale and done underwater, limiting species diversity. This also puts species at greater risk during storm events. In contrast, Coral Vita can grow more resilient coral 50 times faster on land than underwater. However, large upfront costs deter nonprofits from pursuing similar models. This shows the advantage of private investment received by Coral Vita.

Ensuring innovation goes hand-in-hand with scale is another challenge. Kaplan said that if solutions “are not commercially viable, there will not be any private capital to help this space.”

It is also important to make the symbiotic relationship between ecosystem services and economic prosperity clear. Teicher said, “The tourism industry, governments, and coastal property owners are among the stakeholders depending on reefs – and if reefs die, their bottom line is also affected.”

With so much of the ocean left unprotected, there is incredible opportunity to scale globally. Kaplan said, “We don’t want this to be a one-off scenario. We feel this is highly scalable and replicable for other reefs. But then the question becomes, ‘What can we do beyond reefs? Can we insure sea grass, mangrove forests, and oyster beds against different types of risk?’ I think the answer is yes.”

Bryan said there are other possibilities to achieve scale via financial mechanisms. With blue bonds, the difficulty lies with the high dollar amount, which makes it difficult for marine-conservation projects to pay the money back. The $15 million USD sovereign blue bond by the Republic of Seychelles sets a precedent in addressing this difficulty through the provision of grants and concessionary loans to eligible businesses in their early years.

Smaller mechanisms like public-private partnerships have a higher potential for success because they “are very hands-on and there is a lot of valuable interaction between players,” Bryan said. 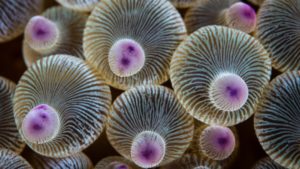 “The financial capital is there, the technical expertise is there, and the data exist,” Kaplan said. “The bigger challenge is stakeholder alignment and governance infrastructure. Swiss Re has seen “tremendous interest” and “appetite in the global community to find ways to protect natural assets.”

This opens opportunities for “large-scale, meaningful, high-impact projects that not only protect the environment but also create jobs and realign the way money is spent so that it is more equitable,” Teicher said.

For example, Coral Vita plans to invest further in research and development with the purpose of integrating technological innovation within coral restoration as they transition towards larger scale coral farms across the world.

Bryan said that a key strength of financial mechanisms for marine conservation is the ability to allow “so many players to work on various angles and appeal to multiple investors.” But what really needs to be developed are more case studies. She said case studies should present “positive demonstrations that say, ‘Look! This works!’”

“Very quickly, there will be a tipping point where [conservation investments] become a norm,” Bryan said.

Indeed, the potential for private sector finance and innovation is limitless. However, the timeline to act is short. As the “last generation” with the power to save nature, according to the World Wildlife Fund, stakeholders need to apply their expertise towards social and environmental challenges. As Kaplan said, “Let your mind run wild thinking about other applications of [finance]. You can use this almost anywhere.”

Featured photo of divers in the Seychelles via Adobe Stock.

This article by Kalyani Basu originally appeared November 27, 2018 on the website of the Conservation Finance Network, a partnership of the Yale Center for Business and the Environment, The Conservation Fund and Island Press, with financial support from The Nature Conservancy. Reprinted here with permission.