More than any thoroughfare in San Francisco, California, the 3-mile-long Embarcadero brings together the elements that make today’s city so compelling, no matter the difficulties it presents from day to day. 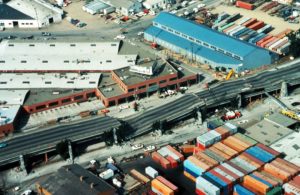 For decades, this post-industrial waterfront sat in a state of decrepitude, unable to be revitalized because it was shut off from the city by the hideous, badly-planned Embarcadero Freeway.

Then, Mother Nature came to the rescue with the 1989 Loma Prieta earthquake, which damaged the freeway beyond repair.

Redevelopment quickly followed the highway’s demolition, with properties being rapidly repurposed and renewed, now that they had been reconnected to the city. It was an early example of the 3Re Strategy (repurpose, renew, reconnect) in action.

Watery vistas unfold between atmospheric historic structures, with Fisherman’s Wharf at one end and AT&T Park at the other. Cultural destinations like the Exploratorium are interspersed with high-end restaurants. On the inland side, there’s a progression of distinct districts, with a short walk to such attractions as South Park and the Filbert steps.

Looking to revitalize this historic but run-down waterfront, San Francisco’s Port Authority decided that restoring the shoreline could greatly improve the future of the city both environmentally and economically. They issued a “request for interest” (RFI) and received 52 (!) responses. 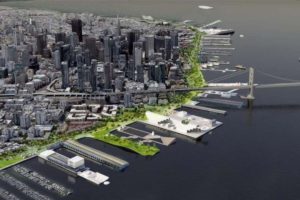 The most ambitious of those proposals was from Sydney, Australia-based the HASSELL Studios. Not surprising, considering their extensive work revitalizing Sydney’s huge waterfront. Their proposal is titled “Resilience, Restoration, Access and Activation.”

It proposes preserving the significant history and culture of the waterfront while protecting against vulnerability to rising sea-levels. It increases public access and boosts the diversity of uses available to the public along the waterfront. Through restoring lost piers as public recreation, tourism, commercial and cultural functions, the proposal looks to fund significant public realm expansions along a new, green Embarcadero.

Coming off the back of the recent Resilient by Design Bay Area Challenge, HASSELL Principal Richard Mullane said preparing for the inevitable sea level rise while repairing former piers , could, and should, be the part of any vision adopted by the Port for the waterfront. 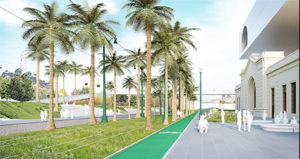 “This waterfront used to be a vibrant gateway to the world, but now more than 20 piers have been lost by decaying and falling into the bay. It’s clear that the main focus should be developing a shoreline for San Francisco that’s not only world class and resilient to future stresses, but also has a diversity of vibrant destinations for the residents of the city,” he said.

Utilising benchmarks HASSELL projects from Sydney’s wharfs, the proposal illustrates an array of possible adaptation approaches suitable for a diverse range of urban uses. From creating sports hubs and museums to mixed-use development and retail to open parks and wildlife sanctuaries, the corridor has the potential to offer far more public access to residents and visitors.

“This is a really important project for San Francisco with endless possibilities to give the public a diverse array of activities and attractions for people of all ages, backgrounds, and economic levels, but also rehabilitate and preserve important sites within the historic Embarcadero district,” Richard said. 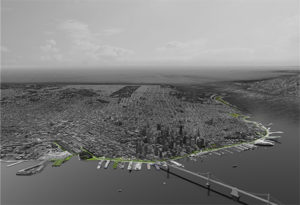 HASSELL’s is a proactive yet pragmatic approach. But the port’s financial options are limited. The costs of bringing aged piers to current seismic standards are daunting.

In an ideal world, as HASSELL has proposed in its ambitious submission, the port would look at the Embarcadero holistically.

It would couple the desire to upgrade historic piers with the need to prepare the waterfront corridor and its eclectic structures for sea level rise.

Redevelopment efforts would be levers to generate imaginative public benefits spelled out in advance via a shared vision and a strategic process to deliver that vision.

All renderings courtesy of HASSELL Studios.