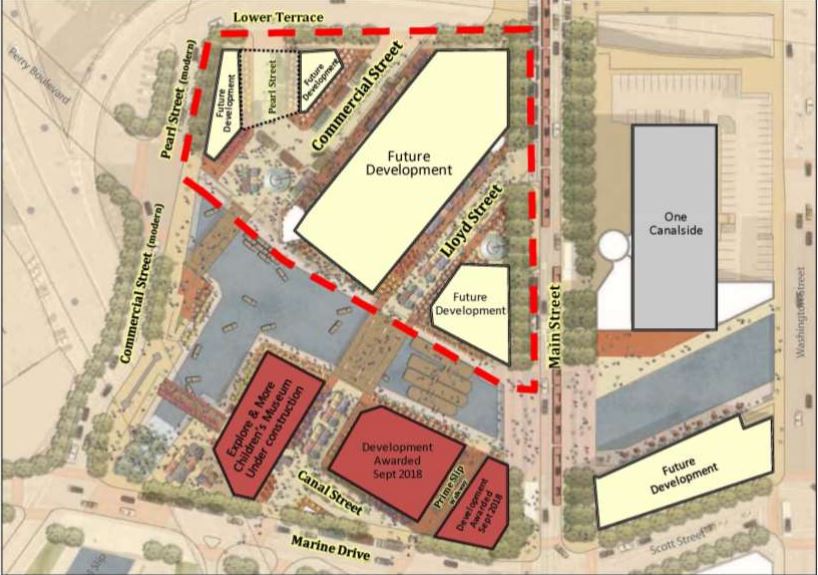 The Erie Canal Harbor Development Corp. board of directors met and gave an update on plans for the redevelopment of the North Aud Block, a two-acre parcel in the revitalized Canalside area of downtown Buffalo, New York.

A request for proposals (RFP) was issued recently seeking design, bid and construction administrative services related to the development of infrastructure facilities on the northern portion of the former Memorial Auditorium Block, also known as the North Aud Block.

In August of 2018, Governor Andrew Cuomo announced $10 million in funding would be committed to support the design and construction of the site’s transformation. The project aims to reintroduce elements of the historic street pattern that once traversed the block and the Erie Canal.

“The North Aud Block transformation supports ongoing efforts to evoke the site’s Erie Canal history and re-establish the area as a downtown neighborhood,” said ECHDC Chairman Robert Gioia. “The intent of this RFP is to complete the historic street grid and set the site for future development of the North Aud Block.”

The Aud Block was originally acquired by ECHDC from the City of Buffalo in 2008. Since then, ECHDC has invested public funds remediating hazardous waste, lead- and asbestos-containing materials, completing demolition of the Memorial Auditorium, relocating utilities and preparing the site for future development. ECHDC completed construction of a series of historically aligned water features on the site in 2014, which now host ice skating and other ice-related activities in the winter and water-based recreation in the summer. Since 2014, ECHDC has been focusing its efforts on the redevelopment of the southern portion of the site, including Explore & More Children’s Museum, to be opened in spring 2019; and Heritage Point, a Sinatra & Company Real Estate mixed-use project that will break ground in 2019.

The North Aud Block redevelopment will include the following inter-related programmatic elements:

Other elements include a commitment to the Canalside design standards and public/stakeholder involvement.

These publicly funded improvements are intended to help facilitate a series of future development parcels that will later be the subject of a period of planning, public review and final engineering, followed by construction.

In other news, the ECHDC board of directors voted to designate New York State Office of Parks, Recreation and Historic Preservation Director of the Western District Mark Mistretta as a member of ECHDC’s Canalside design committee. The group reviews and makes recommendations to the ECHDC board on the design of private development proposals at Canalside regarding their consistency with the Canalside design guidelines.

“I am pleased to be serving in this capacity as we all work together to further develop our waterfront and our city,” Mistretta said. “Canalside is at the epicenter of downtown development, and it is certainly an exciting time to be involved.”

Get a copy of the full RFP here.