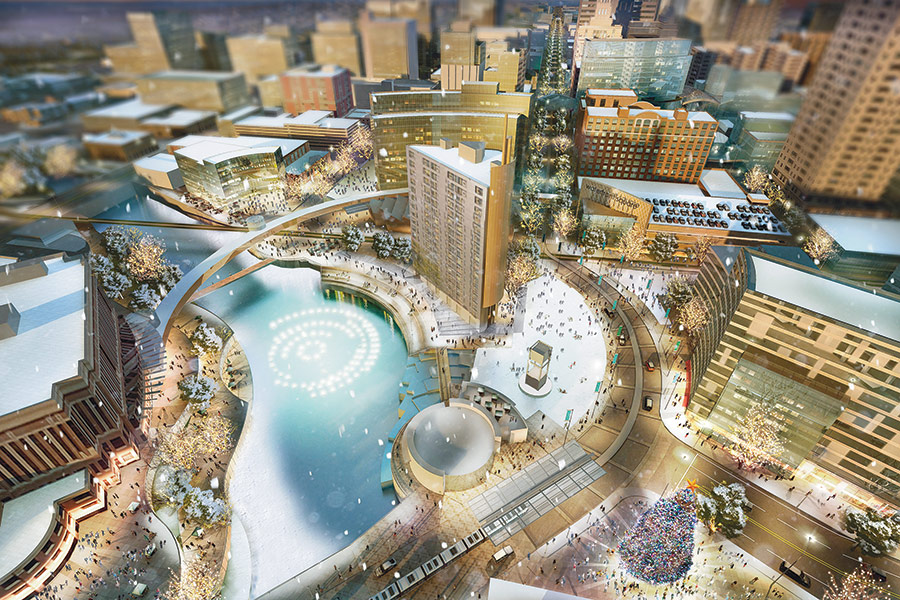 Medicine has always been a calling card for the city of Rochester, Minnesota—or at least since Dr. William Worrall Mayo settled there in 1863. The foundation that bears his name is now the state’s largest employer, sustaining nearly 33,000 jobs throughout Minnesota and beckoning more than 2.5 million visitors to Rochester each year.

Now, an ambitious master plan led by Perkins Eastman aims to help the Mayo Clinic sustain that economic engine over the next two decades by investing in medical and municipal amenities alike.

Mayo and private developers plan to pour $6.5 billion into the so-called Destination Medical Center plan over the next 20 years.

The challenge will be in preserving Rochester’s small town charm while supercharging medical tourism and potentially doubling the population of Minnesota’s third largest city.

The resulting plan is organized around six new districts spread across 550 acres: It calls for a revamped downtown waterfront along the Zumbro River; an ice-skating rink at the foot of Pelli Clarke Pelli’s Gonda Building; an urban office park for biotech companies dubbed “Discovery Square”; and potentially a new rail connection to the Twin Cities, 90 miles to Rochester’s north.

This kind of investment could presage an explosion of new housing, hotels, and commercial space—as well as new high-tech medical facilities from Mayo.