Hollywood producer Hopwood DePree had been told as a boy that an ancestor—who he was named after—had left his family’s English castle in the 1700s to journey to America.

One night, after some wine and a visit to Ancestry.com, Hopwood discovered a photograph of a magnificent English estate with a familiar name: Hopwood Hall. 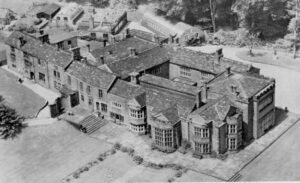 This 60-room, 600-year-old grand manor that had been built on 5000 acres in northwest England was soon to turn DePree’s life into a fairytale.

Located in Middleton, England (9 kilometers north of Manchester), Hopwood Hall had been occupied continuously for five centuries until the last remaining male heirs died in World War I. 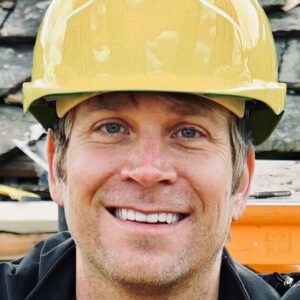 Since then, the Hall had gradually fallen into disrepair and was close to collapse.

When Hopwood first visited in 2013, he discovered trees growing from the chimneys, holes in the roof, and water sluicing down the walls.

It would take many millions (pounds or dollars) to save the Hall; a fortune that Hopwood certainly didn’t have.

And yet, despite the fact he lived in Los Angeles and had no construction skills, DePree decided to move to the Hall bearing his name.

The rest is history. 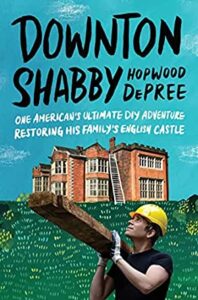 DOWNTON SHABBY—the name Hopwood coined for the glorious ruin—traces DePree’s many adventures as he gives up his Hollywood life and moves across the pond.

He soon discovers that saving the Hall is a task far too big for any one person. He joins forces with an unforgettable cast of new neighbors he can call on for help and with local aristocrats who (sort of) come to accept Hopwood as one of their own.

Together, they navigate the trials and triumphs of the castle’s ongoing restoration and renovation.

Hopwood DePree was raised in suburban Michigan and graduated from the University of Southern California in Los Angeles. 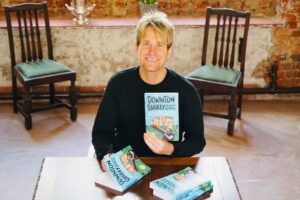 He began his career as writer/performer and independent filmmaker, winning awards and critical acclaim.

As a performer, DePree appeared at many notable stand-up comedy venues, and served as a consultant on entertainment and media ventures for celebrity brands.

Today, DePree lives in Middleton, UK, and focuses his efforts and resources on the restoration of Hopwood Hall Estate, documenting the progress along the way on YouTube: Hopwood XIV.