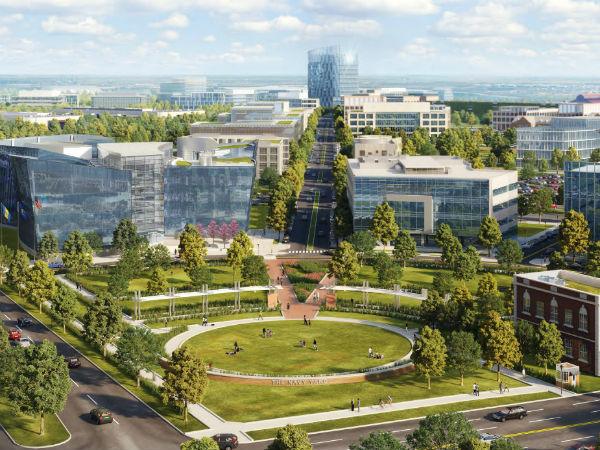 When computer engineer Jim Nasto started working at the Philadelphia Navy Yard about a decade ago, the 1,200-acre property was a virtual desert of vacant industrial buildings and abandoned parade grounds.

Many of those buildings now make up Urban Outfitters’ headquarters, while the vast open spaces are being shaped into office parks inhabited by such corporations as GlaxoSmithKline.

“I love it,” said Nasto, 29, a research contractor for the U.S. Navy, as he tossed a bocce ball in a landscaped park that opened last month. “Now we have all these buildings.”

Ten years after the Navy Yard’s first new offices opened, plans to transform the site from a symbol of the city’s lapsed industrial might into a vibrant new neighborhood are hitting their stride.

The roughly 12,000 workers at the yard now outnumber the 10,000 or so ship workers and others employed there when it closed as a military base in 1996. The yard is estimated to have generated $77 million in local and state taxes in 2012, when its managers conducted their last economic study.

Liberty Property Trust, the yard’s main developer, recently broke ground on its 14th new office building at the site, designed by the architect behind Two World Trade Center, and expects to start two or three more offices this year.

Crews also continue to renovate warehouses from the yard’s heyday for Urban Outfitters, which, already the site’s largest employer with 2,500 workers in eight buildings, plans to add 1,000 more over the next few years.

Joining the new park – landscaped by James Corner Field Operations, designer of New York’s High Line – will be improved waterfront trails and a new canal fed by the Delaware River. Planners hope these amenities will attract workers and full-time residents.