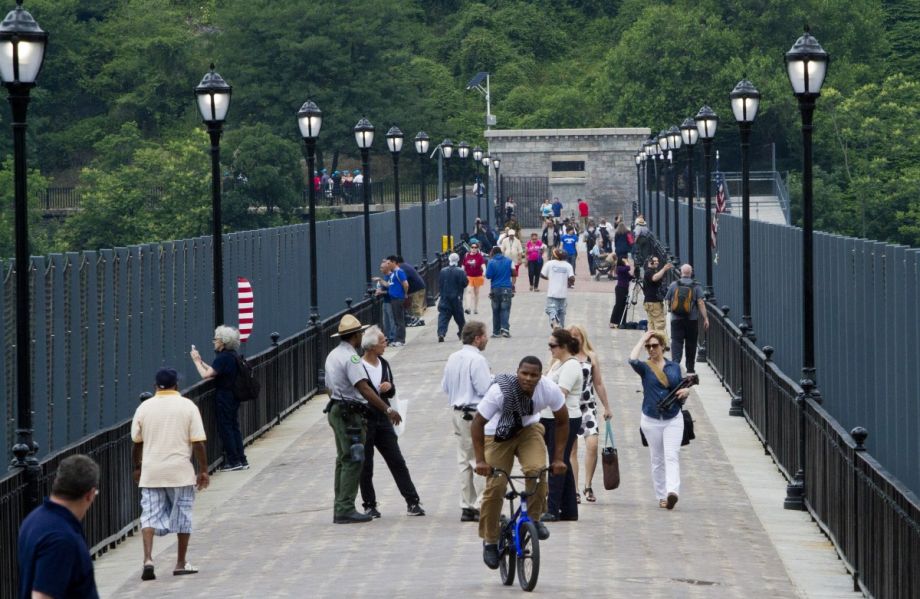 Sometimes called (locally) the “eighth wonder of the world“, New York City’s High Bridge opened this week as a public park, after being closed for more than 40 years.

The bridge, which connects the Bronx and Upper Manhattan, is now just for pedestrians and cyclists. The $61.8 million restoration was paid for by the city and some Federal Highway Administration money, according to the New York Times.

The bridge was part of a plan by former Mayor Michael R. Bloomberg to revive and restore eight major parks and sites across the city, from Fort Washington Park in Manhattan to the McCarren Park pool in Brooklyn.

It is nice. On the Bronx side, there’s a fresh shine to the inlaid brass letters on a white granite path that read, “Under this strip lies the old Croton Aqueduct which supplied water to New York City 1842-1958.” The walkway’s bricks, in a herringbone pattern, have been replaced by City Parks Department crews, with small areas of 1860s brick preserved at either end.

The stone supporting arches have been cleaned; the iron railing restored; and, to illuminate the bridge at night, a necklace of lights has been draped along the bridge’s big central arch. The grand promenade of yesteryear is back in business.

Soon after opening day, June 9, the collective light bulb went on. The Bronx had just gotten its very own High Line Park.

The High Bridge comes as a gift, a jewel to join Yankee Stadium and the New York Botanical Garden in the borough’s crown.

“We have been in a slump for so long,” says Angel Hernandez, who gives tours for the Bronx County Historical Society. “We were the poster child for urban decay. The High Bridge is like a symbol of our turnaround,” he continued.