The £95 million government-funded High Streets Heritage Action Zone program, which is being delivered by Historic England, will unlock the potential of high streets across England, fueling economic, social and cultural recovery. (Note to American readers: In Britain, a “high street” is basically synonymous with what we call a “main street” or a downtown area.) 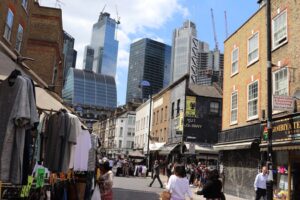 68 high streets were recently offered revitalization funding to give them a new lease of life. The lead partners in each place (mostly local authorities) are working with Historic England to develop and deliver projects that will reuse and restore disused and dilapidated buildings into new homes, shops, work places and community spaces, restoring local historic character and improving public realm.

A further £3 million will be provided by the National Lottery Heritage Fund to support a cultural program.

The money will fund two arms of the cultural program, the first is grants distributed through cultural consortia set up by partners. These consortia will work with artists and creative organizations local to the high streets to develop and deliver activity.

The second part of the program is a series of national cultural commissions. Historic England is asking creatives to respond to briefs that include capturing the everyday spirit of high streets, and connecting high streets across the country; this will include a large-scale outdoor arts celebration of the high street and a four year photography commission to document the changing face of the high street. Further commissions will be announced in each year of the cultural program.

The cultural program is led by Historic England, in partnership with The National Lottery Heritage Fund and Arts Council England.