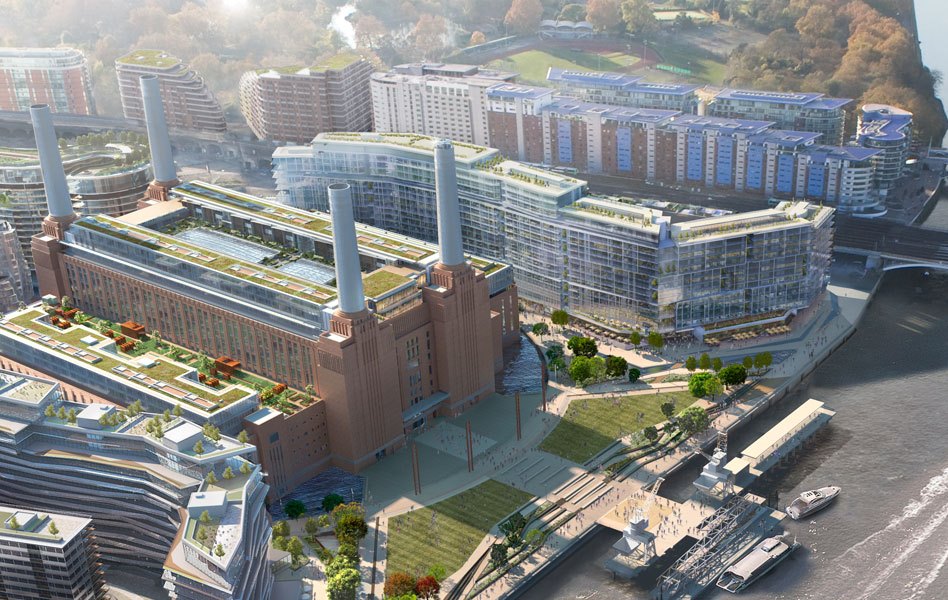 Battersea is a district of south west London, England, on the south bank of the River Thames.

From the late 18th century to the 1970s, Battersea, particularly north Battersea, was a highly-industrialized area, with all of the issues associated with pollution and concentrated poverty. 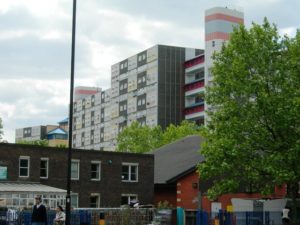 Residential redevelopment in Battersea.Photo by Danny Robinson via Wikipedia.

Many factories were demolished, and the property was redeveloped with modern apartment buildings.

The neighborhood started attracting vast sums of private investment as soon as the city announced that a new Battersea Underground (subway) station would be opened by 2020, thanks to an extension of the Northern Line.

When most people familiar with London hear the word “Battersea” though, the first thing that comes to mind isn’t the district, but its iconic riverfront powerplant, with its four huge smokestacks. 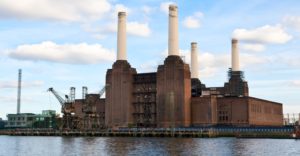 Designed by Sir Giles Gilbert Scott, and built between 1929 and 1939, Battersea Power Station ceased operations in 1983.

There were a number of failed regeneration projects on the way to today’s current one, will repurpose the shell of the building as an entertainment and commercial complex. In 2004, when a redevelopment project by Parkview International stalled, the site was sold to the administrators of Irish company Real Estate Opportunities (REO), who bought it for £400 million in November 2006 with plans to refurbish the station for public use and build 3,400 homes across the site. This plan fell through due to REO’s debt being called in by the state-owned banks of the UK and Ireland.

The site was put up for sale in December 2011 through commercial estate agent Knight Frank. It has received interest from a variety of overseas consortia, most seeking to demolish or partly demolish the structure. 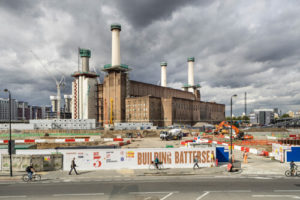 The combination of an existing debt burden of some £750 million, the need to make a £200 million contribution to a proposed extension to the London Underground, requirements to fund conservation of the derelict power station shell, and the presence of a waste transfer station and cement plant on the river frontage made commercial development of the site a significant challenge.

The regeneration is now being managed by Battersea Power Station Development Company (BPSDC). In 2012, administrators Ernst & Young entered into an exclusivity agreement with Malaysia’s SP Setia and Sime Darby to develop the site.

The £400 million sale was completed in September 2012, and the redevelopment is implementing the Rafael Vinoly design, which had gained planning consent from Wandsworth Council in 2011.

In January 2013, the first residential apartments went on sale. Apple will locate its new London headquarters at Battersea Power Station, becoming the largest office tenant with 1,400 staff across six floors in the central boiler house.

The most visible progress is the reconstruction of Battersea Power Station’s four iconic chimneys. They have now been completely rebuilt using the same construction technique as when they first graced London’s skyline. 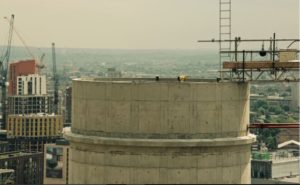 Chimney being reconstructed. Photo by BPSDC.

Since the first pour on May 14, 2015, nearly 25,000 wheelbarrow loads of concrete have been hand-poured into the chimneys that each stand 51 metres tall.

Rather than use a hose to pour the concrete, they replicated the original construction methods and 680 tonnes of concrete was lifted in a hoist to the top of the chimney, transferred into wheelbarrows and then hand poured into the structures.

The rings that can be seen around the new chimneys, and could also be seen around the originals, are a result of the “jump form” method in which shutters are erected at the top of the growing chimney. They are then filled with concrete which is allowed to dry before the shutters move up again to create the next layer. In modern buildings the shutters would typically move up continuously to create a smooth exterior, but this technique was not in use when the Power Station was built. Overall, the hoists have travelled the equivalent of 21 miles, lifting concrete to the workers waiting on boards high above the ground. 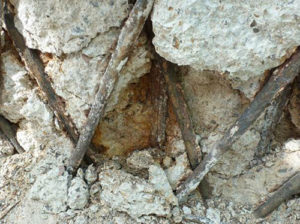 The original chimneys – two were built in the 1930s and the second pair in the 1950s – had to be taken down: they had become dangerously unstable as a result of their many years of funnelling corrosive gases, and in part because salty Thames water was used to mix their concrete.

The dismantling and rebuilding of the chimneys, which was especially difficult due to the need to preserve the building beneath and the special methods which had to be used, won a prestigious award at the London Civil Engineering Awards.

The northeast and southwest chimneys will return to service as exhaust stacks, albeit much cleaner ones than in the old days: they will release the water vapour generated by the new clean, green Energy Centres which will provide heat, cooling and electricity to the new Battersea Power Station and potentially other buildings in the neighbourhood as well. The northwest chimney is the last to be finished. 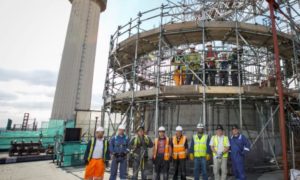 Rob Tincknell, CEO of the Battersea Power Station Development Company, said: “Battersea Power Station’s chimneys have been the backdrop for films, music videos and album covers and really are world famous. On behalf of our shareholders, I would like to say it has been an honour to restore this iconic symbol to the London skyline so that it can be enjoyed by generations to come.”

The creation of a multi-functional, mixed-use place that will become an exemplar project in London is the key objective. This regeneration effort seems to be succeeding brilliantly.

Overview of the project. Image via BPSDC.

The unique UK/Malaysian partnership brings with it the financial strength, expertise and commitment to deliver what is one of London’s most important and iconic development projects that will set new standards for development in the capital.

With the backing of Central Government, the Mayor of London, the London Borough of Wandsworth, English Heritage, and the Design Council CABE, prospects for the redevelopment of the Power Station have never looked better.

UPDATE: On June 21, 2017 Battersea Power Station announced that they were breaking their 2011 promise to the city to provide 636 affordable housing units. They say they are now only going to deliver 386, and even those were subject to an “end of scheme review”.

This is, unfortunately, an extremely common practice among major real estate developers. They promise to provide equitable community benefits, and then back out once they feel the project is far enough along that city leaders won’t want to endanger it. This is often done with a “wink and a nod” from mayors and city councils, who only want the ability to tell the public “we tried“.

Cities that are serious about affordable housing–not to mention social and economic justice–need to force developers to sign Community Benefits Agreements that have real teeth.