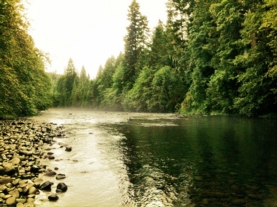 Five years ago Medford, Oregon, had a problem common for most cities—treating sewage without hurting fish.

The city’s wastewater treatment plant was discharging warm water into the Rogue River. Fish weren’t dying, but salmon in the Rogue rely on cold water. And the Environmental Protection Agency has rules to make sure they get it.

So, instead of spending millions on expensive machinery to cool the water to federal standards, the city of Medford tried something much simpler: planting trees.

It bought credits that paid others to handle the tree planting, countering the utility’s continued warm-water discharges.

Shady trees cool rivers, and the end goal is 10 to 15 miles of new native vegetation along the Rogue.

“Traditional environmental practices, litigation, advocacy, got us a long way, but not too much further,” said Joe Whitworth, president of The Freshwater Trust, which spearheaded the Medford project. “We thought, what else is out there, what can we do different to enhance the entire watershed?”

And someone else pretty important agrees with Karp. In a 2012 speech, before the program had really gotten underway, President Obama praised the Medford project as an example helping the environment without putting unnecessary financial pressure on industry.