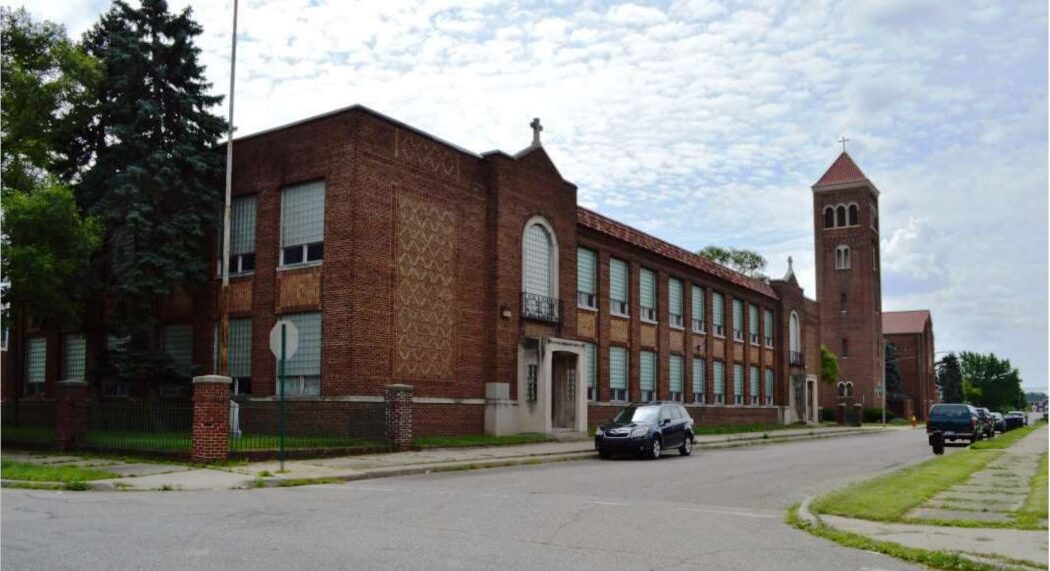 In the in the Banglatown neighborhood of Detroit, Michigan is the former Transfiguration School building. The two-story structure was designed by the architectural firm of Garstecki & Waier and built in 1926 to serve Detroit’s growing Polish population.

The structure also served as the congregation’s church until 1950, when the adjacent church opened next door. The parish school closed in 2005, but the building was leased to a charter school until about 2014. It has sat largely unused since.

The school is the oldest surviving piece of a six-building complex that was added to the National Register of Historic Places in 2019.

Now, on January 12, 2021, the Detroit Housing & Revitalization Department announced that developers Ethos Development Partners and Cinnaire Solutions had kicked off the $7.2 million renovation of the former Transfiguration School that will see the historic building turned into affordable housing.

“This project is about the community coming together to find solutions to both our need for affordable housing and the question on what to do with the many historic but unused buildings that dot our city,” Mayor Duggan said.

“I’d like to thank and congratulate the team behind the renovation of Transfiguration School for not only their commitment to creating affordable housing but also for helping to continue the revitalization of our neighborhoods by reactivating this beautiful building that had been such an important part of Banglatown’s past,” he added.

The Transfiguration Place Apartments at 13300 Syracuse will feature 19 units of affordable housing, all of which will be available at 60 percent area median income (AMI). These affordable rents are made possible through Michigan State Housing Development Authority Low-Income Housing Tax Credits, HOME Investment Partnership and Community Development Block Grant funding administered by the City of Detroit, and project-based vouchers through the Detroit Housing Commission.

The inclusion of PBVs in this project will allow residents of extremely low-incomes (0-50% AMI) to also call Transfiguration Place home in the future. Seventeen of the units will be one-bedroom, with the other two being two-bedrooms. The units will be unique conversions of the former classroom space into living units and feature an abundance of natural light.

The City of Detroit issued an RFP for the site on the behalf of the Archdiocese of Detroit as part of a partnership developed to put historic but underutilized and vacant Detroit buildings back into use. Area residents were part of the RFP selection committee, and the developer held multiple community meetings during the predevelopment process to ensure their feedback would be incorporated into the building.

City Councilman Scott Benson, who represents the Banglatown area, said “This partnership is a perfect example of what happens when we reimagine affordable housing and how we revitalize neighborhoods and communities in Detroit. The project can serve as a viable template for how the City, developers, the ecumenical community, and neighbors collaborate to redevelop a stronger Detroit.”

Historic details of the building will be preserved, and the developers will also be able to tap historic tax credits for the project because of the building’s placement on the register.

“Ethos and Cinnaire Solutions are proud to partner with the City of Detroit, the Archdiocese, the Detroit Housing Commission and MSHDA to bring new life to the historic Transfiguration Catholic School as affordable housing for the community,” said Joseph Heaphy, president of Ethos. “Once completed, Transfiguration Place will be a model for adaptive reuse of vacant schools to turn them into assets for communities throughout the city.”

The Housing & Revitalization Department is helping the development through $1.4 million in HOME funding and $500,000 in Community Development Block Grants (CDBG). Other financial help comes through the Payment in Lieu of Taxes (PILOT) program.

“The Transfiguration Place Apartments will provide much-needed affordable housing in Banglatown and offer residents quality apartments with access to a number of amenities,” said Donald Rencher, director of HRD. “Our department is committed to ensuring that development in our city creates equity and opportunity and that our city’s neighborhoods are welcoming, inclusive places for all.”

The project, which is located in one of Mayor Mike Duggan’s Strategic Neighborhood Fund areas, is slated to be completed in 2022.