New life, powered by $7.9 billion of Chinese investment, is finally coming to redevelop one of the abandoned sites of the 2004 Olympics in Athens, Greece, a masterpiece of corruption and bad planning.

These days, when most people think of an Olympics that was marred by corruption and bad planning, they think of Rio de Janeiro, Brazil. And that’s for good reason, as has been previously documented here in REVITALIZATION.

But, for sheer bad planning, the Brazilians have nothing on the Greeks. Some cities, like Barcelona, London, and Sydney, saw the games as an opportunity to redevelop vacant (often former industrial) properties and create buildings and infrastructure that would serve the citizens for decades thereafter. Mexico City’s vast and wonderfully-efficient subway system got its start at their 1968 Summer Olympics.

Such thinking doesn’t seem to have taken place prior to the 2004 Olympics in Athens. Eight years after hosting the Games, Athens’s Olympic Park, once billed as one of the most complete European athletics complexes, is no testimony to past glories. Instead, it is indicative of misplaced extravagance, desolation and despair.

“They’ve let the whole place go to pot,” says Dimitris Dimitriou, a bank worker escorting his nine-year-old son to a fencing lesson at one of the site’s five installations. “The main stadium is a bit better off because it’s used by football teams but, if you look around, everything is rotting and rusting. The toilets are filthy, the showers stink and there’s no hot water. I don’t think anythinghere has been cleaned for years.”

Then Dimitriou, who was 28 when Athens opened the Olympics in unexpectedly spectacular style, mutters what every Greek now fears. “And, to think, we are still paying for all this. It’s part of the reason why our country is broke. And I hate the thought but he will be paying for it, too,” he says, pointing to his son.

The Olympic sports complex is bad, but not as bad as the Helleniko Olympic complex on the other side of town. Here venues are not just ill-maintained but, like the economy, almost in freefall. Air conditioners and bits of panelling – apparently dislodged by high winds – lie on the ground, while the once gleaming chalet-like apartments for athletes look more like a dilapidated council estate than the manicured compound they once were. The complex’s stadium, also built in 2004 – and used by Greece’s national athletics federation – is cracked and crumbling, its seats broken, its stairs smashed, its track ripped. 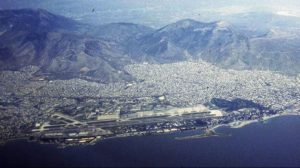 But Chinese investors have finally arrived with some good news.

Hopes for Greece’s struggling economy rose in the last week of May, 2017 when the government approved a transformational plan to turn Athens’ dilapidated coastal Olympics complex and abandoned Hellinikon airport into a swanky new resort, business and residential district.

Billed as “Europe’s largest urban mixed-use development project”, it is being spearheaded by Greek developer, Lamda, which has been joined by Chinese conglomerate Fosun and the Abu Dhabi investor, Eagle Hills.

It had been earmarked as a metropolitan park but was largely abandoned for the past decade. Now the consortium plans to build a 200-hectare (494-acre) park along with apartments, hotels and shopping malls at the site, which also includes some venues from the 2004 Olympics.