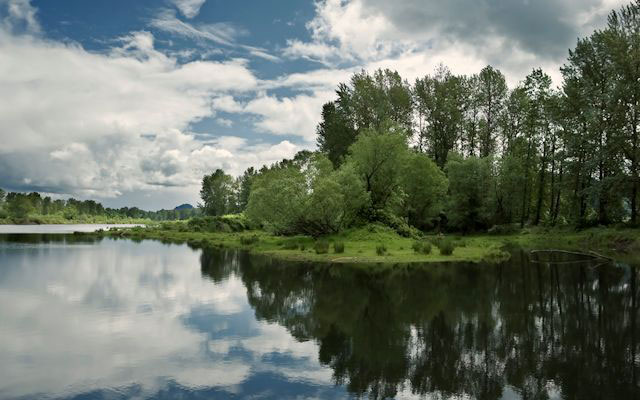 For decades, gravel pits and protective man-made embankments have defined the Oregon landscape where the Middle and Coast forks of the Willamette River meet, just south of Eugene and Springfield.

But river advocates are changing that, one big scoop of dirt at a time, mainly funded by regional electricity ratepayers and state tax­payers.

The Nature Conservancy, a worldwide conservation organization, is nearing the end of its earthmoving work on 1,305 acres it calls the Willamette Confluence Preserve. It’s an ecological crossroad where water and wildlife come together in tremendous diversity.

The multi-­million-dollar floodplain revival project is among the largest ever undertaken on the Willamette River or its tributaries. Planners say it’s a model for more restoration elsewhere on the river, which over many years has been penned in by gravel pits and levees.

Restoration work on the Willamette Confluence Preserve has cost about $6 million to $7 million over the past decade, said Matt Benotsch, Willamette Valley stewardship coordinator for The Nature Conservancy. The money has come from a long list of sources, including the state and federal governments and individuals donors.

The Nature Conservancy bought the bulk of the Willamette Confluence land for nearly $24 million in 2010 from the Wildish family of Eugene, owners of the Wildish construction and gravel company. Wildish had dug the pits over many decades. Benotsch said he is excited to see the site reviving. “It doesn’t take long for it to return,” he said.

Restoration is expected to take the better part of a decade. Eventually the property will be turned over to public ownership.

Photo of the Willamette Confluence Preserve courtesy of The Nature Conservancy.

See article by Dylan Darling in the Register-Guard.