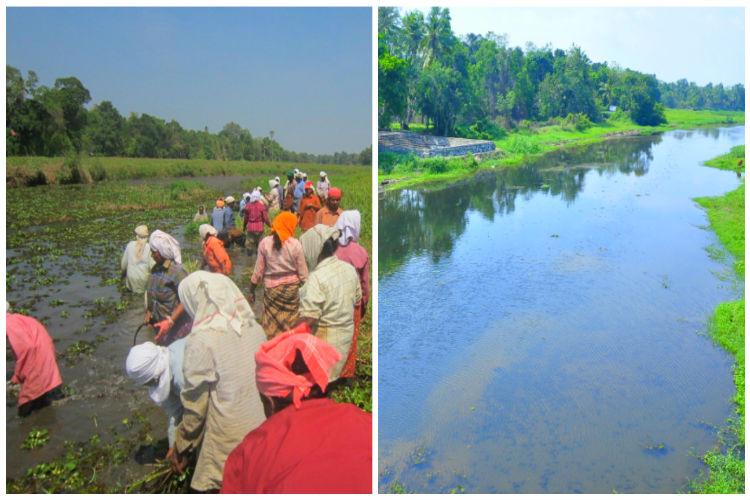 In the not-so-distant past, the Kuttemperoor River in the Alappuzha district of Kerala, India was the village of Budhanoor’s lifeline. The residents of the village never experienced drinking water crisis, nor did they have a shortage of water for irrigation. In fact, the river was a source for irrigation for about 25,000 acres of paddy fields.

It also helped control the flood in many places, because when the Pamba and Achankovil rivers overflowed, Kuttemperoor took in the excess water. Back then, the river was also used by local traders to transport their goods.

For two decades, the Kuttemperoor river has slowly choked under the weight of trucks dumping loads of trash directly into it, rampant illegal sand mining, and construction sites that dumped tons of sewage on its once-pristine banks. Fish and aquatic life were wiped out, and the once-gurgling river was reduced to a narrow cesspool of festering diseases.

Not anymore. A 700-strong local group of villagers, mostly women, have spent weeks wading through toxic waste, algae and risking deadly water-borne diseases to physically de-silt and clean the river.

Breakneck urbanization in the 90s and 2000s reduced the 120-feet-wide river to a 20-feet narrow, black stream. Frustrated with slow government response and a scorching drought, the villagers organised themselves in February of 2017 and started work under the national rural jobs program.

They first removed weeds and then plastic that was lodged solidly in the river bed. The next step was to dredge the water of pollutants and other debris dumped over the years. “Once we removed all waste river started recharging on its own and on 45th day flow started. For women folk, it was not just a work for money but it was gargantuan task to revive a lifeline,” said Sanal Kumar, a volunteer with the Mahatma Ghandi National Rural Jobs Guarantee Scheme. Full flow was restored on the 70th day.

Adding to the happiness, there are fish in the recently reborn river now, and the village is ready to start fishing soon.

Redeeming the entire river should be an ongoing mission that could be achieved by the joint efforts of neighboring panchayats such as Mannar and Pandanad, said N.K. Sukumaran Nair, environmentalist and general secretary of Pampa Parirakshana Samiti. “The river, which had a width of 100-130 ft in its heyday, has shrunk to 10-15 ft at many locations owing to encroachment. Stern measures are required to evict the encroachers to help regain the lost glory of the river,” he says.

My thanks to Katherine Cornwell for bringing this project to my attention! – Storm Cunningham

See article and photo credit in The News Minute.

See article in the Hindustan Times.

See article in The Hindu.