The Tennessee Central Railway (TC) was founded in 1884 as the Nashville and Knoxville Railroad by Alexander S. Crawford. It was an attempt to open up a rail route from the coal and minerals of East Tennessee to the markets of the midstate, a service which many businessmen felt was not being adequately provided by the existing railroad companies. 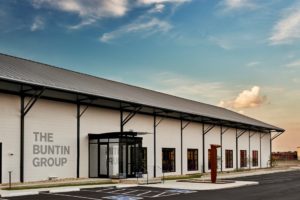 They also wanted to ship coal and iron ore to the Northeastern US over the Cincinnati Southern Railway, which was leased to the Southern and operated as the Cincinnati, New Orleans and Texas Pacific Railway [CNOTP], through their Cincinnati gateway.

By the 1880s, railroads were becoming a mature industry and it was not easy for a new competitor to break in.

The firm and its successor companies would struggle for decades with both financial woes and hostility from the more established lines.

By the end of 1956, TC operated 286 miles of road and 377 miles of track and that year reported 278 million net revenue ton-miles of freight and 1 million passenger-miles. 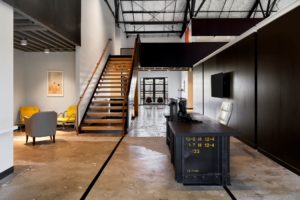 The Tennessee Central endured for over 80 years in the face of very tough odds, and played a considerable part in the economic development of its service region.

TC is remembered fondly by many people in the small towns it served as “The Route of Personal Service,” and is commemorated by a namesake institution, the Tennessee Central Railway Museum, in its former master mechanic’s shop, which served as its headquarters in its final years.

But it’s another remnant TC building that is making the news today. The repurposing of a historic Tennessee Central Railway shed honors the history of the structure, while generating space for creative workflow for The Buntin Group, a Nashville-based ad agency. 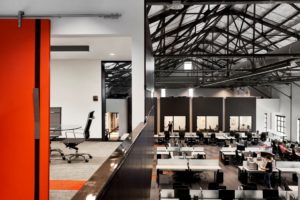 Built in the early 1900’s as a maintenance shed, the building was originally constructed using materials from the adjacent rail yard.

This adaptive reuse highlights the original steel structure that forms the generous 35-foot high volume and celebrates the craftsmanship and ingenuity of past generations.

The architects of the project were Hastings Architecture Associates, who say, “Old rail lines and train cars inform the massing and linework of the new design intervention. The new open workspace creates a highly collaborative and flexible space designed to adapt with the rapidly changing world of ad buying and content creation.”