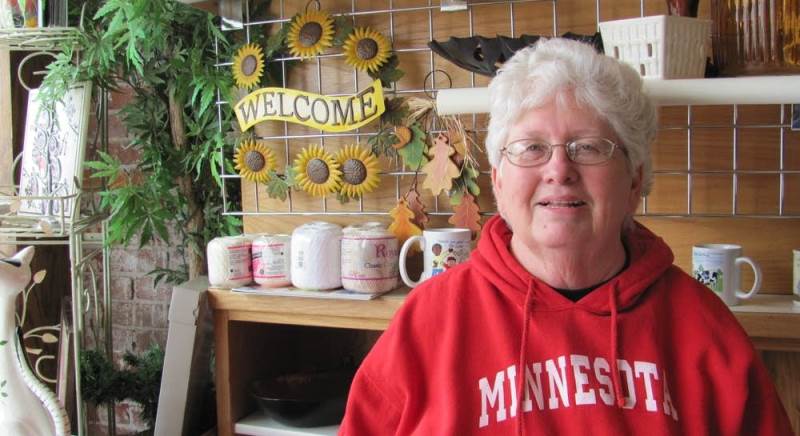 Muriel Krusemark has the keys to many of the buildings in downtown Hoffman, Minnesota (population 681) because as economic development coordinator, she’s had a hand in reviving many of them and filling them with businesses.

Krusemark moved back to Hoffman, her hometown, six years ago to retire after managing the deli at Cub foods in Shakopee. “When I came back here, main street was practically empty,” she said. “There were three or four businesses. The buildings were falling down and they had dirty windows. It was like a lot of main streets.” She was quickly recruited to serve as the city’s development coordinator and set out to remake the place.

Since the retiree took a part-time gig as Hoffman’s economic development coordinator in 2007, businesses have filled the city’s main drag — two modest blocks bordered by silver grain silos. With doggedness and good humor, Krusemark has helped this small city 25 miles southwest of Alexandria fight economic forces that have emptied out similar Main Streets across Minnesota and the country. The gobbling up of small farms. The closing of schools. The arrival of big-box retailers in distant, larger cities.

Krusemark doesn’t try to lure hot, 100-employee companies to Hoffman, pop. 681. Instead, her day-to-day work sustains small projects that are a big deal to residents.

“These are not stories you’d hear from the economic developer in Minneapolis,” said David Fluegel, executive director of the Southwest Regional Sustainable Development Partnership. “But for a city the size of Hoffman, in my estimation it just doesn’t get any better than Muriel.”

Krusemark knew what residents wanted. Not a fancy restaurant or a movie theater, but a doctor who came to town once a week. She launched a plan to get a clinic, persuading practitioners in Alexandria and Fergus Falls to spend a few hours a week in Hoffman.

She nabbed an $86,000 grant to renovate a “falling down building” and enlisted inmates to do the demolition work. Today, the Hoffman branch of Prairie Ridge Hospital and Health Services is open three days a week.

Jeffrey Wencl, who started as an intern in Krusemark’s office, said that victory showed residents that her vision for a better Hoffman was real.

See full article by Jenna Ross in the Star Tribune.