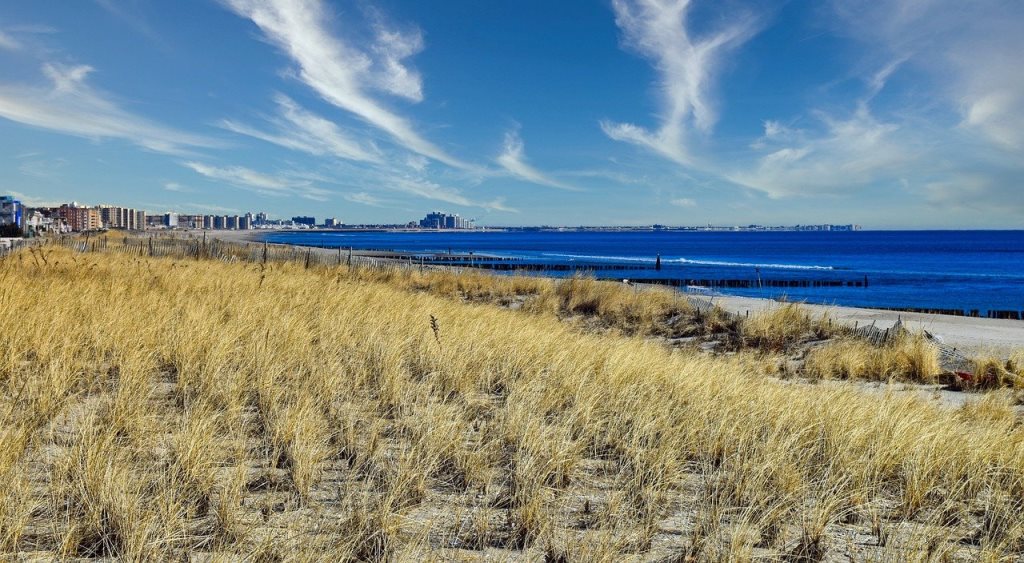 “Eight years ago, Hurricane Sandy devastated our city and our shoreline,” said Mayor Bill de Blasio. “We committed to building back stronger than ever, and I am thankful for our federal and state partners for working together to make this critically important project come to life. Together, we are protecting our shoreline and creating a more resilient New York City.” 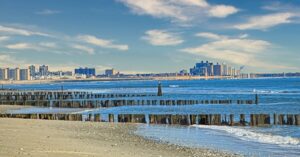 The project will help protect communities and strengthen the shoreline along six miles of the Rockaway Peninsula. The U.S. Army Corps of Engineers-led project consists of a reinforced dune system designed to block storm surge and new extended tapered groins.

These stone groins are jetty-like structures extending out into the ocean intended to trap sand to regenerate beaches and reduce beach erosion, and help maintain a critical natural buffer between the Atlantic Ocean and local communities.

Jainey Bavishi, Director of the Mayor’s Office of Resiliency, said, “After Hurricane Sandy battered the Rockaways, we vowed to build back stronger. Now, construction has begun on this critical project, which will protect communities along the Rockaway Peninsula from future coastal storms and beach erosion. None of this would have been possible without the steadfast support of our Federal and State partners, and we’re incredibly grateful for their hard work and continued commitment to building a more resilient coastline.”

The design of this project resulted from extensive analysis to determine best practices for a more resilient beach and shoreline as part of the U.S. Army Corps of Engineers’ East Rockaway Inlet to Rockaway Inlet, and Jamaica Bay Study, which was completed and released in 2018.

Colonel Matthew Luzzatto, Commander of the New York District, said, “This crucial resiliency project represents a tremendous effort to reinforce the shoreline and coast. Bolstering six miles of resiliency to reduce the devastating impacts of coastal storms saves lives, reduces property and economic damage. I would like to thank all of our partners at the federal, state and city level who worked to move this project forward during this tumultuous time.”

The U.S. Army Corps awarded the construction contact to initiate this first major project phase to H&L Contracting LLC of Bay Shore, Suffolk County, for approximately $114 million. Work has begun on the contract with the construction of new groins in the Beach 30s. The full Rockaways – Atlantic Shorefront Project is expected to reach completion within four years.

The Atlantic Shoreline component is the first of two U.S. Army Corps of Engineers major coastal infrastructure projects undertaken to strengthen Rockaway Peninsula. In close coordination with New York City and The New York State DEC, the U.S. Army Corps of Engineers is also advancing the Jamaica Bay component, which will involve constructing a system of berms, floodwalls, and nature-based features along the coastline in flood-prone communities bordering Jamaica Bay. This project is currently in the preliminary design phase and has an estimated cost of $237 million.

Senator Charles E. Schumer said, “Ever since Hurricane Sandy devastated the Rockaways, I have fought tooth and nail to secure hundreds of millions of dollars to rebuild homes, schools, and playgrounds, as well as construct a new boardwalk, stone groins, and reinforced dunes across the Atlantic shorefront to protect this community from future superstorms. With this important project finally underway, the beaches of the Rockaways – from Far Rockaway to Neponsit – will soon match the resilience of the people who live alongside them. I thank my federal, state, and local partners – especially Mayor Bill de Blasio – for working so hard to get us to this point, and I look forward to when we can all gather together to celebrate this milestone in person with the community. And then go for a relaxing swim and a stroll on the boardwalk.”

The Rockaway Peninsula was devastated by Hurricane Sandy in 2012. More than 1,000 structures were either substantially damaged or destroyed by the storm surge, which reached a height of 10 feet. Additionally, approximately 1.5 million cubic yards of sand was displaced from Rockaway Beach and deposited on adjacent communities or washed out to sea.

Senator Kirsten Gillibrand said, “I am proud to have fought for federal funding to make the Rockaways-Atlantic Shorefront Project a reality. As we confront climate change’s devastating impact on our communities, we must do everything possible to protect New Yorkers and to preserve the unique and beautiful ecosystem along our coastlines. This project is a testament to that commitment and to the thousands of resilient New Yorkers rebuilding their lives and communities after Superstorm Sandy.”

Shortly after Sandy, the U.S. Army Corps of Engineers placed approximately 3.5 million cubic yards of sand back onto Rockaway Beach to restore the project to its original design profile and improve resiliency against erosion and coastal flooding. Following Superstorm Sandy, Senators Schumer and Gillibrand secured federal funding for this project as part of the Sandy supplemental appropriations bill (Public Law 113-2). The Senators fought to ensure that the construction of this project would be fully funded by the Federal government.

New York State Department of Environmental Conservation Commissioner Basil Seggos said, “After seeing the devastating impacts of Superstorm Sandy, Irene, Lee, and other coastal storms driven by climate change, New York and our partners continue to take action to protect our shorelines and the communities that depend on them. I applaud Governor Cuomo, the U.S. Army Corps, and the city for advancing this critical project and look forward to continuing to work with the Rockaway community through to its completion.”

The Atlantic Shoreline component of this project is a joint effort undertaken by the City of New York, the New York State Department of Environmental Conservation (DEC), and the U.S. Army Corps of Engineers. It is being built at a cost of approximately $336 million in federal funding. This project will be critically important to protecting coastal communities from flooding, severe weather events, and other impacts in the Rockaways caused by climate change.

Representative Gregory Meeks said, “I am thrilled to see the Army Corps of Engineers commence their work to reinforce Rockaway’s shoreline, providing a long-term solution for greater resilience to our beach and community. The reinforced dunes and stone jetties will be instrumental in preventing future storms from eroding our shore, helping our beaches remain open for business. I thank Senators Schumer and Gillibrand for working with me to secure this project through Congress, as well as the Mayor and Governor for their continued support on the ground.”

The first phase of construction will include the construction of 14 new stone groin structures and the rehabilitation of five existing groins on the Atlantic Ocean side of the Rockaway Peninsula. These new stone groins will provide stabilization for a re-nourished sand beach and dune and maintain the protective beach profile.

State Senator Joseph P. Addabbo, Jr. said, “On the 8th anniversary of Superstorm Sandy, I am thrilled to see the start of construction on this much-needed coastal resiliency project that will help protect our communities from coastal flooding and beach erosion. After witnessing the devastation of Sandy, I know we cannot afford to have another superstorm or hurricane inflict massive damage to our communities like Sandy did eight years ago. All of the aspects of this project will go a long way in safeguarding the beaches and coastal areas to the effects of climate change. I would like to thank the Mayor’s office, Governor’s office, the State Department of Environmental Conservation (DEC) the U.S. Army Corps of Engineers, and everyone involved in bringing this essential project to fruition.”

These improvements will also help restore local ecosystems and ensure the long-term viability of endangered species like the piping plover and sea amaranth. The high winds and fast-moving inundation caused by Hurricane Sandy disrupted the barrier island landscape that provides a home to local flora and fauna.

Assemblywoman Stacey Pheffer Amato said, “On the 8th Anniversary of Hurricane Sandy, this project has never been more necessary and will bring much-needed resiliency infrastructure to our district. By starting the reinforcement of our coastal defense against the ever-worsening effects of climate change, I am hopeful that this is the beginning of more solid measures we can take. I am grateful to all of my partners in government and in the community for coming together to make this project possible during this challenging time.”

The second phase of construction will include the construction of a reinforced dune system that will strengthen the shoreline against coastal storms, which are growing more frequent and more destructive due to climate change. The dunes will be constructed with armor stone and steel sheet pile walls at their core, which will reduce wave breaking pressure and limit storm surge inundation and cross-peninsula flooding.

NYC Parks Commissioner Mitchell J. Silver, FAICP, said, “The Rockaway-Atlantic Shorefront Project is critical to enhancing shoreline resiliency and protecting not only the Rockaway community but all New Yorkers. Reinforcing the Rockaway Shoreline is a key component to sustaining the beach and our waterfront parks. We are grateful to the U.S. Army Corps of Engineers for leading this project and to Governor Cuomo, Mayor de Blasio, and our partners across all levels of government for their commitment to creating a more resilient city.”

All public access points across the dunes will be rebuilt using resilient materials.

“Climate change is already impacting our everyday lives, and Hurricane Sandy demonstrated that the Rockaways in particular are vulnerable to damaging flooding from extreme weather driven by warmer temperatures,” Governor Cuomo concluded. “New York State is proud to collaborate on this project as part of our ongoing efforts to build stronger and more resilient communities across the state.”