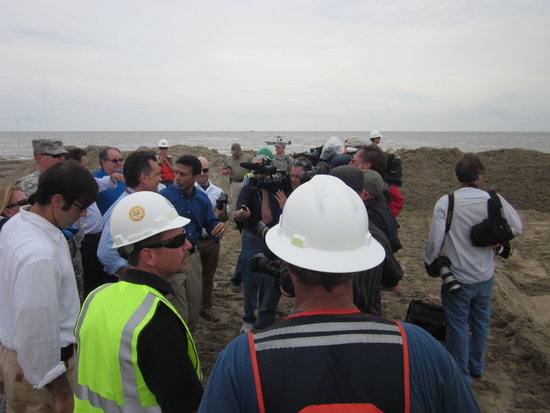 On September 13, 2016, with a mix of laughing gulls, brown pelicans and frigate birds watching from the air, employees of the Great Lakes Dredge & Dock. Co. were directing sand from the Mississippi River into place on the new beaches and dunes that are the rebuilt east and west lobes of Shell Island, about 8 miles southwest of Buras in Plaquemines Parish, Louisiana.

The $80 million reconstruction project at the southern end of Barataria Bay, paid for with part of a 2011 early payment by BP for natural resource damages caused by the Deepwater Horizon oil spill, should be complete by November, said Brian Puckett, Great Lakes manager for the project, during a tour of the island provided to journalists by the state Coastal Protection and Restoration Authority and the company.

The state is rebuilding or has rebuilt 52 miles of barrier islands, barrier headlands and ridges stretching from Caminada Headland south of Port Fourchon to the Grand Liard Marsh and Ridge restoration just south of Triumph along the southern edge of Barataria Bay.

The projects provide a first line of defense to both communities along the southern Mississippi River and in lower Jefferson and Plaquemines parishes against hurricane storm surges moving north from the Gulf of Mexico and to the remaining wetlands within the bay that state officials hope to strengthen and expand in the future. Black mangroves already have colonized a part of the island rebuilt during an earlier project also paid for with money from BP.

In theory, it sounds easy. Dredge sand from the river and run it through pipes and stack it up to form an island. All you have to do is dredge up some sand and pile it up until it looks like an island. Sure, no problem…

In reality, it has taken an extraordinary effort to plan, design, and implement this project that has grown the once disappearing Shell Island into an island that will ultimately be 1.3 miles of Gulf shoreline and 307 acres of beach and marsh habitat. Combine this with the work done on nearby Pelican and Scofield Islands, and we’re talking about a pretty serious investment in saving some of our dwindling barrier island habitat.