In the coastal city of Hull, Yorkshire, England, (full name: Kingston upon Hull), the Hull+ revitalization initiative is a collaboration between the Hull City Council and the Environment Agency.

It will see an investment of up to £5 million in environmental enhancements to the Dock Office Row area, as well as reducing flood risk to businesses, providing greater economic and job security in the area.

Funded by the European Regional Development Fund and the Environment Agency, it is envisaged that the work will generate additional investor confidence in the area.

It will complement the £27.4 million Hull: Yorkshire’s Maritime City project, also being delivered by Hull City Council. A grant of £15 million from the Heritage Lottery Fund helped enable the project.

The Dock Street area is identified as having potential to be used as a tourist destination in the local plan and includes improved footpaths to the waterfront.

Hull+ project manager Paul Ahdal, of the Environment Agency, said, “As well as improving flood defences in the area we hope the scheme will help provide a springboard for development and help continue to attract tourists to the city following the success of Hull 2017 City of Culture.”

Councillor Daren Hale, Hull City Council’s Portfolio Holder for Economic Investment and Regeneration, added, “It is great to see work starting in this area. It marks the beginning of an exciting journey ahead as we embark on an ambitious project to reconnect this part of the city centre with the waterfront, offering a new visitor centre and dry-berth for the Arctic Corsair telling the maritime story and important role this area played.” 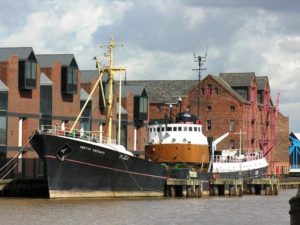 The Arctic Corsair.Photo by George Robinson via Wikipedia,

The first phase of work will see the removal of silt from the dry dock area off Dock Office Row. This will allow the Arctic Corsair to be relocated to the area after being renovated by contractors for Hull City Council. The Arctic Corsair is a deep-sea trawler that was converted to a museum ship in 1999. It’s currently berthed between Drypool Bridge and Myton Bridge in the River Hull, and is part of Hull’s Museums Quarter.

The silt removed will be sent for recycling and used in the manufacture of building blocks.

The Hull+ scheme compliments a number of other projects in the area which include the River Hull Defences, delivered by the Environment Agency, and the Hull: Yorkshire’s Maritime City project, delivered by Hull City Council.

Northern Powerhouse and Local Growth Minister, Jake Berry MP, enthused: “I am really pleased to see this vital scheme coming together, delivering jobs and flood improvements for local businesses. It’s a great example of the Government working in partnership with the Council to stimulate growth through infrastructure and heritage investment in the Northern Powerhouse.”