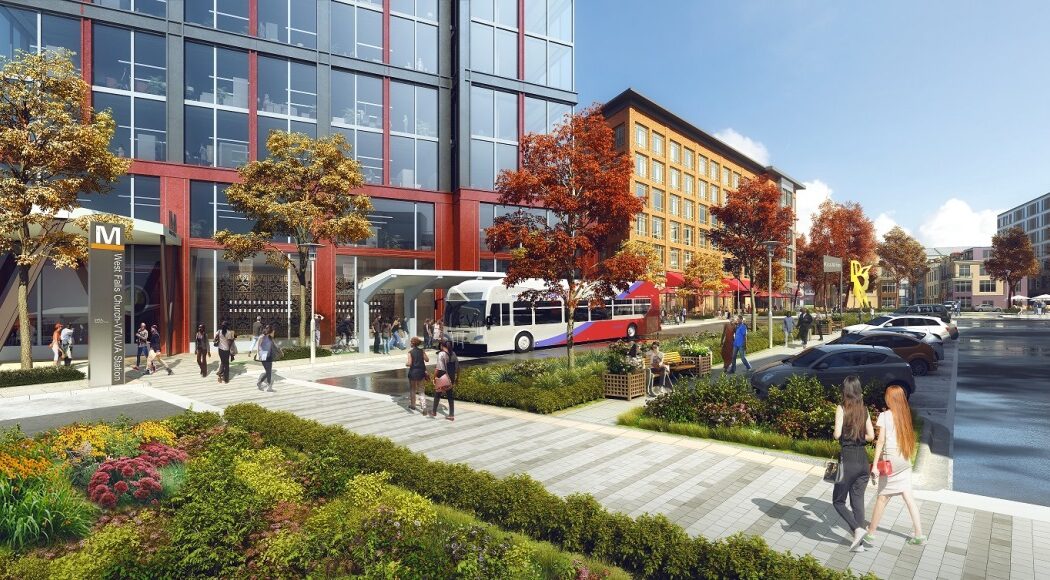 The redevelopment plans will create a vibrant, mixed-use community at the Metro station, with over one million square feet of office, retail, and residential space. In this way, Fairfax County continues its efforts to replicate the intelligent decision adjacent Arlington County made half a century ago to concentrate most new development around Metro stations, thus becoming the national birthplace of the transit-oriented development movement, and the smart growth trend.

We say “continues”, because Fairfax County is also redesigning and redeveloping the suburban planning disaster known as Tysons Corner (now rebranded as Tysons) into a green, pedestrian-friendly, transit-oriented neighborhood, as previously documented here in REVITALIZATION.

This West Falls Church Metro project is the result of a multi-year effort among Metro, the development team, and Fairfax County to amend the Comprehensive Plan recommendations for the site to revitalize an underutilized, space-wasting asset in Metro’s portfolio. 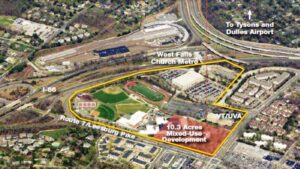 In 2019, Metro’s Board of Directors agreed to seek proposals for the site and gave approval to move forward with a joint development agreement (JDA) and compact public hearing last December. The deal is expected to generate long-term revenue for Metro through 99-year ground leases, in addition to fares from new ridership.

“The West Falls Church Metro Station is a unique opportunity that will convert underutilized parking lots to provide housing, jobs and economic opportunities, and create a cohesive development plan with the adjacent publicly-owned sites,” he added.

Back on July 13, the Fairfax County Board of Supervisors approved an amendment to its Comprehensive Plan to support development of both the Metro site and the adjoining Virginia Tech site, with mixed-use development emphasizing safe and convenient bicycle and pedestrian enhancements connecting to the Metro station.

Over the next year, the joint development team will proceed through Fairfax County’s rezoning process to advance the design and planning for the West Falls Church Metro Station site.

The rezoning application will include the detailed plans for the redevelopment of Metro’s parking lots with apartments, townhomes, neighborhood retail, and public green spaces. It will connect the proposed mixed-use redevelopment of the Meridian High School (formerly George Mason High School) site in the City of Falls Church to the West Falls Church Metro Station with new bike lanes, broad sidewalks, publicly accessible park spaces and a secondary grid of streets that will help alleviate some of the congestion in the area.

“The execution of the JDA and vote by the Board of Supervisors are critical next steps in enabling the transformation of the West Falls Church Metro parking lots into a walkable, bikeable, and welcoming neighborhood,” said Evan Goldman, Executive Vice President of Acquisition and Development at EYA. “There is an evident need to create a pedestrian friendly development and optimize the West Falls Church Metro Station, and our team of developers look forward to making this happen.”

Later this year, Metro will also hold a public hearing on the proposed changes to commuter parking and bus facilities.

Together with the surrounding community and Metro, EYA, Hoffman & Associates and Rushmark Properties, have created a thoughtful design that accommodates buses, Metro Kiss & Ride and Park & Ride users while transforming the property into a vibrant, inclusive, and walkable neighborhood with inviting, open spaces, sustainable design elements such as enhanced storm water management systems, affordable housing, safe pedestrian and bike connections and a community dog park.

Construction is anticipated to begin in 2023.