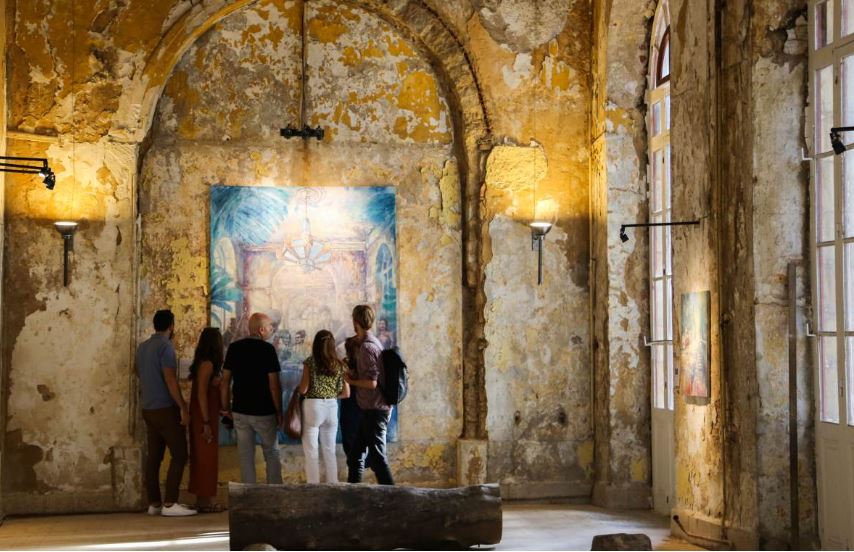 Dotted with bullet holes and scarred by war, a once iconic hotel in Sawfar (Saoufar), Lebanon—abandoned for more than 40 years—is coming back to life through the paintings of an artist who’s on a mission to revive the memories of its glorious past. 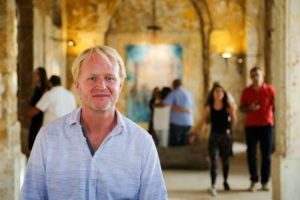 British artist Tom Young studies the history of abandoned buildings in Lebanon, many of them a reminder of the country’s civil war, and creates paintings based on old photographs, stories, architecture and their surrounding environment.

His exhibitions, held in the abandoned buildings, are free of charge and include community events to help stir public interest in their history.

“These great places … are just sleeping and in many ways with my art I am hoping to perhaps wake them up and make them relevant for the present day and the future,” said Young, who has been living in Lebanon for the past nine years.

Lebanon has no law to protect historic buildings and many have been demolished to make way for modern apartment buildings and offices.

In the capital Beirut the number of historic buildings has dropped to about 250, down from 4,200 in the 1990s, according to campaign group Save Beirut Heritage.

Young’s latest project is the Grand Sofar, a 75-room hotel built in 1892 under Ottoman rule that was bustling with famous people from Egyptian actor Omar Sharif to diplomats and generals who shaped the history of the country and region.

The hotel, about 30 kilometres (19 miles) away from Beirut, became a casualty of the country’s 15-year-long civil war, which began in 1975, the year the hotel closed its doors.

One of the owners, Roderick Sursock Cochrane, whose family built the hotel, wanted to bring its history back to life through Young’s “out of the ordinary” exhibition. “Every painting which you see here depicts an event which happened in the hotel. And that is very, very important I find, because people just don’t come and see regular paintings but they also come and learn what has happened in this place,” he said.

One of Young’s paintings is based on a photo he found of 80-year-old Samira Sayegh on her wedding day standing with her husband on one of two grand staircases at the entrance of the hotel.

“It was so emotional because I went 52 years back (to) the day of my wedding,” Sayegh said with a smile, remembering when she first saw Young’s painting. “The young generation, they don’t know what is the Grand hotel. Since 1975 it (has been) hidden – now it’s coming back.”

Cochrane plans to use the old hotel as a wedding venue and cultural centre for local artists, and he hopes to encourage young people to appreciate historic buildings. “Old does not mean necessarily that it has to be destroyed for something new to come instead of it,” said Cochrane, sitting outside the hotel.

Naji Raji, founder of Save Beirut Heritage, a local organisation fighting to save architectural heritage in the capital, said buildings like the Grand Sofar are under threat. “There is no law protecting heritage buildings in Lebanon. The dangers of removing these historic buildings means losing identity and common memory,” said Raji.

In 2013, Young found an abandoned 19th century mansion in central Beirut that was left in ruins. He brought it back to life with his paintings and through partial renovation.

But what mattered most to the 45-year-old is that his exhibition led to the building to be used as a public cultural centre for three years before becoming the residence of the head of the European Union delegation to Lebanon.

“Really our memories, our history is what gives us our identity, and in Lebanon that identity is under threat because of this destruction of both architecture and human memory,” he told the Thomson Reuters Foundation in the Grand Sofar hotel.

In several of his exhibitions, including in the Grand Sofar, he teaches art classes to refugee children and orphans to show how art can be used to revive memories and history in derelict buildings.

Learning about history through art helps young people to connect to their identity, a different experience then through history books, said Young.

This article by Heba Kanso was originally published by Thomson Reuters Foundation in Place. Reprinted here with permission.