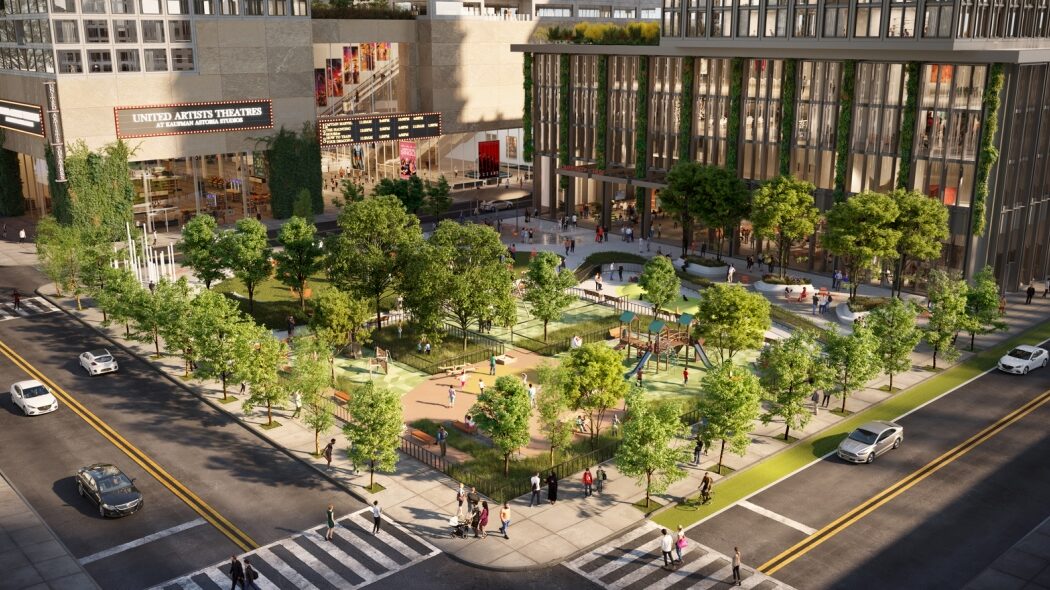 In December of 2022, the New York City Council approved Innovation QNS, a five-block master plan to help revitalize the Astoria neighborhood of Queens. 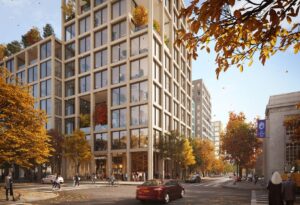 Current tenants were offered space in the development, and many will remain in the neighborhood, including a cinema and several locally-owned small businesses.

Back in 2020, as part of New York’s effort to recover from the devastating impact of COVID-19, a consortium of redevelopers, business leaders, investors and designers worked together to create a $2 billion plan to revitalize this dead zone in Astoria.

The goal was to create a diverse, vibrant, walkable, mixed-use creative district in this corner of the community. 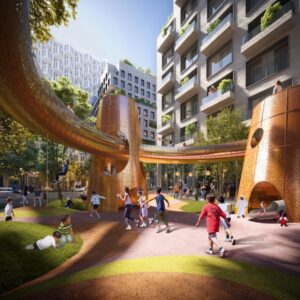 The plan was designed by ODA, a New York-based design and architecture firm, led by Eran Chen with a team of architects and landscape designers.

A main design element of the master plan was to dedicate 25% of the ground floor to the public realm, as Queens has the lowest amount of green space per capita in NYC.

Over the last decade, ODA has focused heavily on innovative housing solutions and mixed-use projects from a community standpoint by designing specifically for the public realm and the mixed-use program needed to support it.

Their built projects like Denizen and 10 Montieth in Bushwick, as well as waterfront developments like 420 Kent, were successful models for inclusionary housing (20-25% affordable) as well as placemaking. 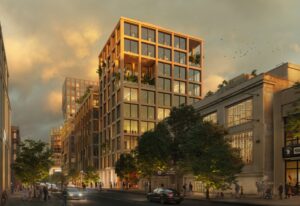 “ODA has attempted a quiet, but unyielding revolution over the past ten years, coming up with new built formulas that change the balance between haves and have nots through a greater share of common ground,” said Eran.

Innovation QNS, spanning from 37th Street to Northern Boulevard/43rd Street between 35th and 36th Avenues, will expand the adjacent Kaufman Arts District and build on Astoria’s rich cultural fabric, including its existing cultural assets like the Museum of the Moving Image and Frank Sinatra School of the Arts.

ODA’s design hopes to transform of five city blocks into a thriving, equitable and cultural destination for thousands of New Yorkers. 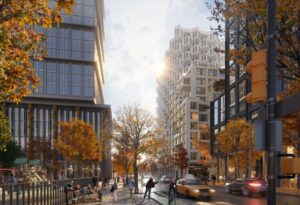 The plan currently includes 3200 units of housing, more than 45% of which will be affordable.

“By expanding the public realm to the greater community at large, you don’t have to live in an ODA building to enjoy it or reap the benefits of its design. The public at large will have access to more urban amenities, and to attractive landscape and hardscape spaces. ODA always includes an affordable housing component into our projects, and here we are integrating 45% of deeply affordable housing, while prioritizing the health and well-being of the surrounding community,” said Eran. 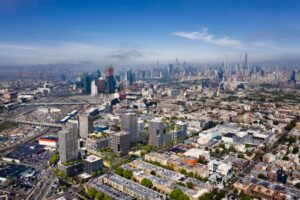 “People will want to live, work, play and invest in our project because it offers a forward-thinking sustainable model with a positive impact on the community. The hope is that its denizens will become stakeholders and stewards of their own environment, putting the responsibility of true sustainability back on us all,” he concluded.

ODA worked in collaboration with landscape designer SWA/Balsley to bring their vision to life.

While each of Innovation QNS’ six open spaces functions on its own with focused programming and carefully considered design elements, together the spaces form an inclusive public realm network that will enliven public life.

These new public spaces combine contemporary design and amenities with a deep respect for this historic and diverse Queens community.

All renderings are courtesy of ODA. They are preliminary iterations of the design, and do not reflect the final approved design.