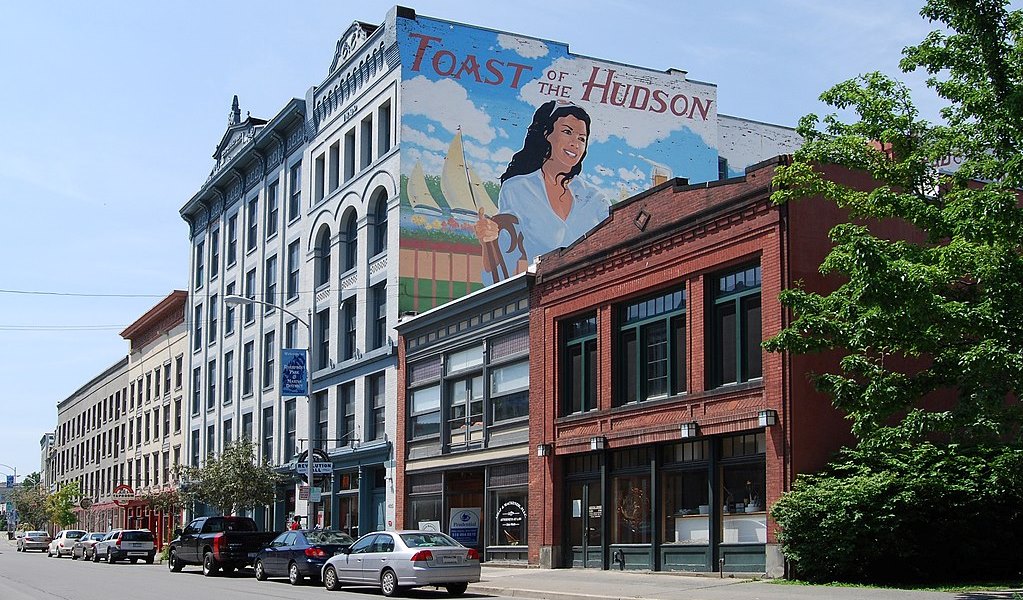 On November 13, 2021, the city of Troy, New York learned that it will receive $10 million to regenerate the city center as one of the New York Capital Region winners of the fifth round of the state’s Downtown Revitalization Initiative (DRI).

As part of DRI Round 5, each of the state’s 10 regional economic development regions are being awarded $20 million, to make for a total state commitment of $200 million in funding and investments to help communities boost their recovery by transforming downtowns into vibrant neighborhoods. 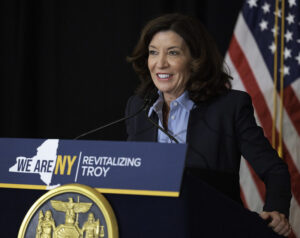 Photo of Gov. Kathy Hochul courtesy of the Office of the New York Governor.

“The grassroots strategic vision for this project will ensure that Troy’s cultural and economic revitalization is responsive to the needs of the community and will create long-term prosperity,” she added.

The DRI serves as a cornerstone of the State’s economic development policy by transforming downtown neighborhoods into vibrant centers of activity that offer a high quality of life and attract businesses, jobs, and economic and housing diversity.

“Troy’s historic and walkable riverfront joins the many downtown districts to benefit from New York State’s Downtown Revitalization Initiative,” Lieutenant Governor Benjamin said. “This award will allow the City of Troy to strengthen this district culturally and commercially, as well as supporting an equitable recovery of this urban space from the pandemic.”

Troy’s DRI will focus on the Riverwalk District, which includes the heart of Downtown Troy’s Historic District. The area is compact and walkable, contains a large portion of the city’s arts, cultural, and entertainment assets, and includes 1.6 miles of unified riverfront.

In this round, Governor Hochul doubled funding from $100 million to $200 million and allowed each Regional Economic Development Council to decide whether to nominate two $10 million awardees or one $20 million awardee for transformative downtown redevelopment projects.

New York State Homes and Community Renewal Commissioner RuthAnne Visnauskas said, “The Capital Region is rich with housing, economic, education, and cultural assets that enable businesses and families to thrive, and this $10 million investment will make the area an even better place to live and work. The award for the city of Troy illustrates the state’s commitment to building economically strong communities in urban areas across New York. As we continue to rebound from the COVID pandemic, I commend Governor Hochul for maximizing the effectiveness of this initiative and assuring it has an immediate and transformative impact.”

As with past DRI rounds, each selected community will develop a strategic plan through a bottom-up, community-based planning process that articulates a vision for the revitalization of its downtown and identifies a list of signature projects that have transformative potential and leverage further private and public investments. DRI funds will then be awarded for selected projects that have the greatest potential to jumpstart revitalization and realize the community’s vision.

Revitalization Initiative Award. As a former Mayor, I appreciate how transformational this funding will be, especially along the Downtown and Waterfront areas of the Collar City. Troy has wisely rediscovered its waterfront which was in the past a critical part of the industrial era of the community. That same waterfront, now the benefactor of significant investment from the City of Troy, local businesses, and surrounding communities is now a beacon for redevelopment in the city. Thank you, Governor Hochul for your leadership and commitment to our localities and I look forward to even greater investments in the future.”

Senator Neil Breslin said, “I am proud to be a part of this exciting investment in Troy. With this Downtown Revitalization Investment, we continue the progress that the City of Troy has made to connect the City to the Hudson River. Thank you to Governor Kathy Hochul, and all the community partners that made this project happen.”

The Capital Region Economic Development Council conducted a thorough and competitive review process of proposals submitted from communities throughout the region and considered all seven criteria below before recommending Troy as one of the nominees:

Troy is now entitled to receive $10 million in state funding and investments to revitalize its downtown neighborhood and generate new opportunities for long-term growth. Troy now joins the cities of Glens Falls, Hudson, Albany and Schenectady, which were the Capital Region’s winners in the first four DRI rounds, respectively.

Secretary of State Rossana Rosado said, “This DRI award demonstrates New York’s commitment to rebuilding our urban communities and helping them attract business and offer a high quality of life for residents and visitors. The Department of State looks forward to working with the City of Troy to build on its exciting momentum to create a better place for residents, businesses and visitors right here in the Capital Region.”

Troy will now begin the process of developing a Strategic Investment Plan to revitalize its downtown with up to $300,000 in planning funds from the $10 million DRI grant. A Local Planning Committee made up of municipal representatives, community leaders, and other stakeholders will lead the effort, supported by a team of private sector experts and state planners.

The Strategic Investment Plan will examine local assets and opportunities to identify economic development, transportation, housing, and community projects that align with each community’s vision for downtown revitalization and that are poised for implementation. The Strategic Investment Plan will guide the investment of DRI grant funds in revitalization projects that will advance the community’s vision for its downtown and that can leverage and expand upon the state’s $10 million investment. Plans for the DRI’s fifth round will be complete in 2022.

Capital Region Economic Development Council Co-Chairs Ruth Mahoney, NBT Bank President of Wealth Management and Dr. Havidán Rodriguez, University at Albany President, said, “On behalf of our fellow Council members, we congratulate the team in Troy for putting forth a winning DRI plan that will utilize state funding to unlock new economic potential and growth in the heart of the city’s Historic District.”

The Downtown Revitalization Initiative launched in 2016 to accelerate and expand the revitalization of downtowns and neighborhoods in all ten regions of the state to serve as centers of activity and catalysts for investment. The initiative represents an unprecedented and innovative plan-to-act strategy that couples strategic planning with immediate implementation.

In the first four years of the program, the state committed $400 million to invest in downtowns that are ripe for revitalization and have the potential to become magnets for redevelopment, business, job creation, greater economic and housing diversity, and opportunity. The fifth round of the DRI will have an additional $200 million commitment. Participating communities are nominated by the state’s 10 Regional Economic Development Councils based on the downtown’s potential for transformation. Each community is awarded at least $10 million to develop a downtown strategic investment plan and implement key catalytic projects that advance the community’s vision for revitalization and leverage additional private and public investments.

Troy Mayor Patrick Madden said, “The City of Troy is thrilled to be selected for the fifth round of the Downtown Revitalization Initiative. The DRI has been a transformative program for countless communities across New York State, and these funds come during a critical time for Troy as we navigate our post-pandemic recovery. With the assistance of the DRI, we will expand the revitalization of our waterfront, invest in transformative redevelopment projects to support local job creation and spur economic growth, and strengthen connections between downtown and our diverse neighborhoods. We thank Governor Hochul and the Regional Economic Development Council for their selection of Troy and look forward to bringing our Riverwalk District plan to life.”

The initiative is headed by New York Secretary of State Rossana Rosado. Communities receive support from private sector experts and a team of state agency staff led by the Department of State in close partnership with Empire State Development, and state Homes and Community Renewal.

Featured photo of Northern River Street in Troy is by UpstateNYer via Wikipedia.