The Lockheed Super Constellation is a beautiful aircraft; a classic from the 1950s that’s all smooth curves and powerful propellers leading out to an elegant triple tail fin. 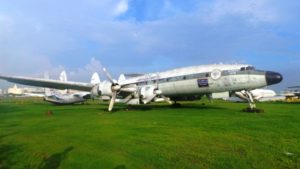 The Super Connie sitting sadly at the airport in Manila, Philippines.

So it’s little wonder that, even when one particular “Super Connie” was left to rot in a muddy field in the Philippines for 25 years, that wasn’t the end of the story.

Qantas Founders Museum is a not-for-profit organisation whose mission is to tell the story of Australia’s national airline, Qantas Airways, and how it began in Western Queensland in 1920.

The Super Connie in her new home, just before restoration began.

The museum, which has some 42,000 visitors annually, has a variety of exhibits, interactive displays, artifacts and aircraft. They include an original Qantas Boeing 747, Qantas’ first Boeing 707, an original Qantas DC3 and a Consolidated Catalina flying boat, together with replicas of early-era aircraft.

The Lockheed Super Constellation (nicknamed “Supper Connie”) is an iconic aircraft in the history of Qantas and Australian aviation for a number of reasons: 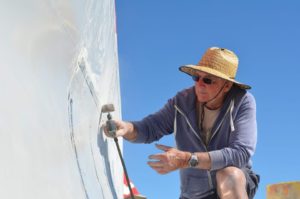 Nearly four years after Qantas Founders Museum acquired their Lockheed Super Constellation in Manila, Philippines, the external restoration of the aircraft to the original Qantas livery in Longreach is now complete.

Qantas Founders Museum purchased the Super Constellation aircraft from the Manila International Airport Authority in September 2014. Over two and a half years, with the support of Qantas Engineering and a devoted team of volunteer engineers, the aircraft was extracted from it’s mud encrusted position, disassembled and the components transported by ship from Manila to Townsville, then by truck from Townsville to Longreach, arriving in late May 2017. 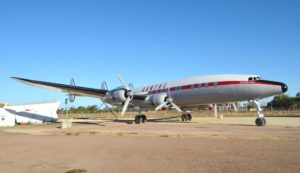 Qantas specialist engineers, volunteers and contractors have been working in sometimes trying conditions to prepare and restore the exterior of the aircraft. This has included replacing corroded and missing areas, reassembling the aircraft and repainting it in the Qantas Super Constellation livery.

The livery details were provided from original Qantas 1950’s drawings, sourced and reproduced by Qantas’ Curator and Engineering technical staff.

Qantas Founders Museum CEO Tony Martin said it was great achievement by all involved in the Super Constellation Project to see restoration to a pristine condition completed. “The Super Constellation Project has been a long and at times trying project but the end result with a beautiful aircraft externally restored, is well worth it. This project would not have been completed without the hard work and dedication of our Project Manager Rodney Seccombe, Qantas Engineering, our contractors and volunteers and the support of our sponsors and community, thank you to everyone who assisted us.”

“The new aircraft is an important addition to our aircraft collection and enables us to tell a significant part in the history of Qantas while featuring one of the most iconic aircraft in commercial aviation history,” he added. 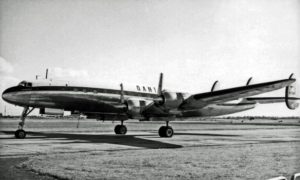 Qantas Lockheed L-1049 Super Constellation arriving at Heathrow from Australia in 1955. Photo by RuthAS via Wikipedia.

This project was substantially funded jointly by the Qantas Foundation Memorial Ltd. (the parent company to Qantas Founders Museum), Qantas Airways and the Australian Government with funds administered by the Queensland Government through the Tourism Demand Driver Infrastructure Fund.

The next stage of the project will be the internal restoration and display creation which the Qantas Founders Museum hopes to be completed by the Qantas Centenary year of 2020.

All photos courtesy of Qantas Founders Museum, unless otherwise credited.