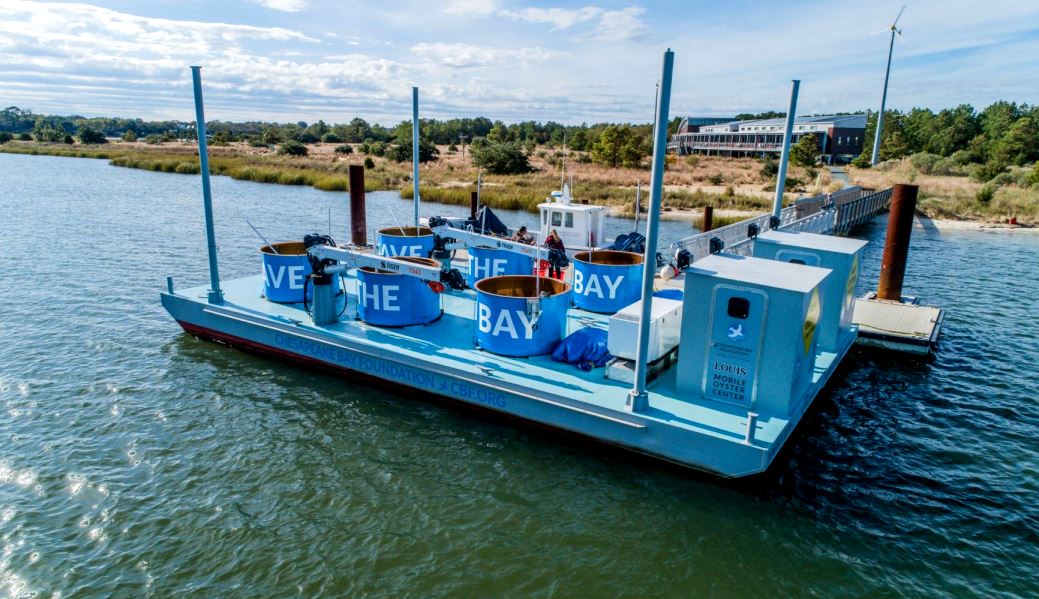 CBF restoration experts and volunteers last week loaded recycled oyster shells into large tanks on the facility on the Lynnhaven River at CBF’s Brock Environmental Center in Virginia Beach. They then released 9 million oyster larvae into these tanks, which will attach onto the shells. CBF volunteer oyster gardeners will raise these baby oysters for planting on sanctuary reefs. 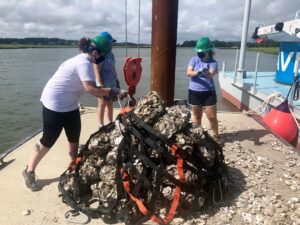 “Our new oyster barge allows us to produce up to 15 million oysters per year, doubling our capacity in Virginia. We’ll also be able to educate and engage even more people by bringing an oyster restoration center to new communities across Tidewater Virginia,” she added.

This is the only mobile oyster restoration center operating on the Chesapeake Bay. The two linked barges hold six 850-gallon tanks filled with local river water where baby oysters attach, or “set,” to recycled shells or concrete reefballs. These are then planted on nearby sanctuary reefs.

Previously these baby oysters would need to be driven from a separate restoration center to the rivers where work was taking place. The new barges will allow the majority of oyster–setting to take place on the very same rivers where restoration is occurring. Reducing travel time and using local river water in tanks will help ensure healthy, well-adjusted oysters.

These oysters will contribute to the Chesapeake Oyster Alliance’s ambitious goal to add 10 billion oysters to the Bay by 2025.

At each location, CBF will work with the local community to find a location that works well for both neighbors and the surrounding environment.

This project was made possible thanks to financial support from Prudence and Louis Ryan, the Hampton Roads Community Foundation, and the Marietta M. & Samuel T. Morgan Trust.