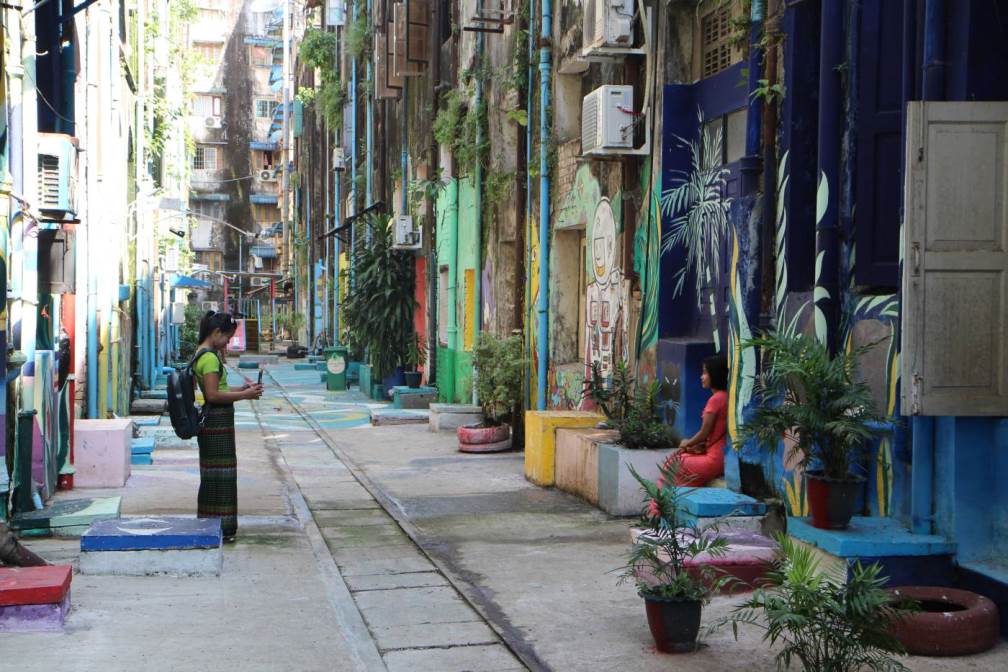 For years, Yee Lay kept the back door of her ground floor apartment firmly shut to keep out both the stench from the rubbish that other tenants would carelessly throw behind the building and the hordes of rats that fed on it.

Now, standing in the narrow back alley in downtown Yangon, Myanmar, the longtime resident beamed at the scene in front of her. There were colorful wall murals, neatly potted plants, small wooden seats, swings and a bright green and yellow see-saw.

“It’s wonderful to see a backstreet looking like this,” sighed Yee Lay, 55.

The alley’s transformation from a trash-strewn street into a public playground and garden occurred in 2017, spearheaded by Doh Eain, a social enterprise determined to make this booming city more livable.

“Yangon has one of the lowest ratios of public spaces in the region or in the world,” Doh Eain founder Emilie Roell told the Thomson Reuters Foundation in another colorfully-painted alley behind their office.

“That means children have nowhere to play, the elderly have nowhere quiet to sit outside and there are very few places where people can just come and gather,” she said.

For its latest project, last June Doh Eain opened a community playground and park in Yankin, a Yangon suburb, in an abandoned plot of land that was fast becoming another garbage dump.

With more than half the world’s population living in cities, according to the United Nations, it is crucial for urban areas to be inclusive and sustainable, said Robin King of the Washington-based think tank World Resources Institute.

“It’s particularly important for poor people because they don’t necessarily have the opportunities to pursue private recreation spaces,” said the director of the institute’s Sustainable Cities program.

Roell shares the same concern, saying privately-owned playgrounds and spaces that charge families to use them are popping up around Yangon. “Some of the wealthier children can afford to play there but a lot of the poor children, they need to go miles in order to have a nice playground or they don’t get to go outside so much,” she said. 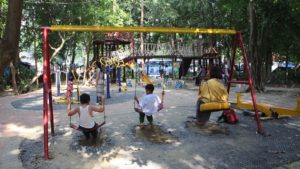 Children play at a public park and playground in Yankin, designed with the help of a group of young girls. Photo: THOMSON REUTERS FOUNDATION/Thin Lei Win.

A study by local non-profit Another Development found that between 1990 and 2014, the population of Yangon, Myanmar’s former capital and largest city, nearly doubled to more than 5 million.

But the amount of green space per person declined by nearly 40% to about 0.40 square metres (4 square feet).

This is much lower than other densely-packed Southeast Asian cities such as Jakarta and Bangkok, both of which have about seven square meters (75 square feet) per person, according to government data and various studies.

For Roell, an anthropologist by training, her mission to get more green space into Yangon started as a side project after she moved to the city in 2013 to work for the United Nations.

Helping a friend renovate his apartment in a historical building got her involved in heritage restoration and converting a small alley near her home into a garden led to more projects.

When Roell and a few friends organised some activities with the neighbourhood children, “a discussion started to emerge about how people should be taking more responsibility over their waste and how they haven’t got enough public spaces,” she said. “It seemed to sort of reawaken a sense of ownership and engagement … And neighbourhoods started coming to us.”

By 2017, they had formed Doh Eain (“Our Home”), an architectural and design practice that now has more than 30 staff and multiple commercial and non-profit projects to turn neglected spots around Yangon into green oases. 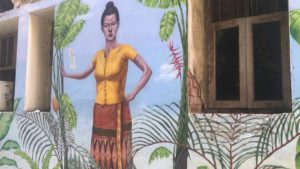 Drawings on one of the back alleys that have been upgraded with the help of Doh Eain in downtown Yangon. Photo: THOMSON REUTERS FOUNDATION/Thin Lei Win

Yangon has a hectic downtown full of grand colonial buildings, some of which have been given new life as hotels, bars and restaurants.

But the alleys, many of which lie behind garishly-painted blocks that quickly rose in the 1980s and 1990s amid a construction boom, are often used as rubbish dumps by residents.

They were beyond the reach of city officials too, because under the law, the Yangon City Development Committee (YCDC) is to collect garbage from designated bins and spaces, said Zaw Win Naing, deputy director of Pollution Control & Cleansing Department at YCDC.

However, a 2016 directive tasked his department with a one-off cleaning of these back streets in six townships in downtown Yangon. This is now completed and YCDC is expanding similar work to other neighborhoods, he added.

The backstreets that Doh Eain has upgraded – eight so far, with funds coming from crowdsourcing and donations – are now attractions for tourists wanting to see the city beyond the glossy brochures and locals in search of perfect selfie spots.

At the same time, other community groups such as Clean Yangon are advocating the importance of keeping Yangon’s streets free of trash.

“People originally thought it was just a fad. But now that we are still going more than two years later, we see general public joining in more and more,” said Thinzar Aye, a campaign representative.

The proliferation of these groups is important, said YCDC’s Zaw Win Naing. “Keeping Yangon clean requires the participation of everyone in the city, including residents. It can’t be the sole responsibility of a single department,” he said.

Still, maintaining these spaces is a continuous challenge in a city where the mould-inducing monsoon season takes up half the year and few households have the resources for expensive brickwork cleaning treatments.

“One really important part is the community ownership,” said Roell of Doh Eain, explaining that the group asks neighbors and building owners to pay part of the cost of transforming their spaces and take on some of the responsibility for maintenance.

For Kyaw Zin Myint, the shared ownership of the alleyway outside his apartment, which Doh Eain turned into an urban farm filled with medicinal and edible plants, came with a strengthened sense of community.

One of the walls on his street bore a poem written by former political prisoner and blogger Nay Phone Latt, now a member of Yangon’s regional parliament, to commemorate the day the cleaned up alley was re-opened two years ago. “This small street was not opened by the cutting of ribbons, but by cutting the metal chains that locked our hearts,” it read.

“Before, there was nowhere to put your feet down because of the garbage, dirt and rats. Sewage was leaking too. It was horrible,” Kyaw Zin Myint said. “Now, if it’s hot inside, we can come out and rest in the shade here. During school holidays, kids can play here.”

Featured photo (by THOMSON REUTERS FOUNDATION/Thin Lei Win) shows visitors taking pictures at one of the back alleys that have been upgraded with the help of Doh Eain in downtown Yangon, Myanmar, on Nov 1, 2019.

This article by Thin Lei Win (@thinink)—edited by Jumana Farouky and Zoe Tabary—originally appeared on the website of the Thomson Reuters Foundation, the charitable arm of Thomson Reuters. Reprinted here (with minor edits) by permission.