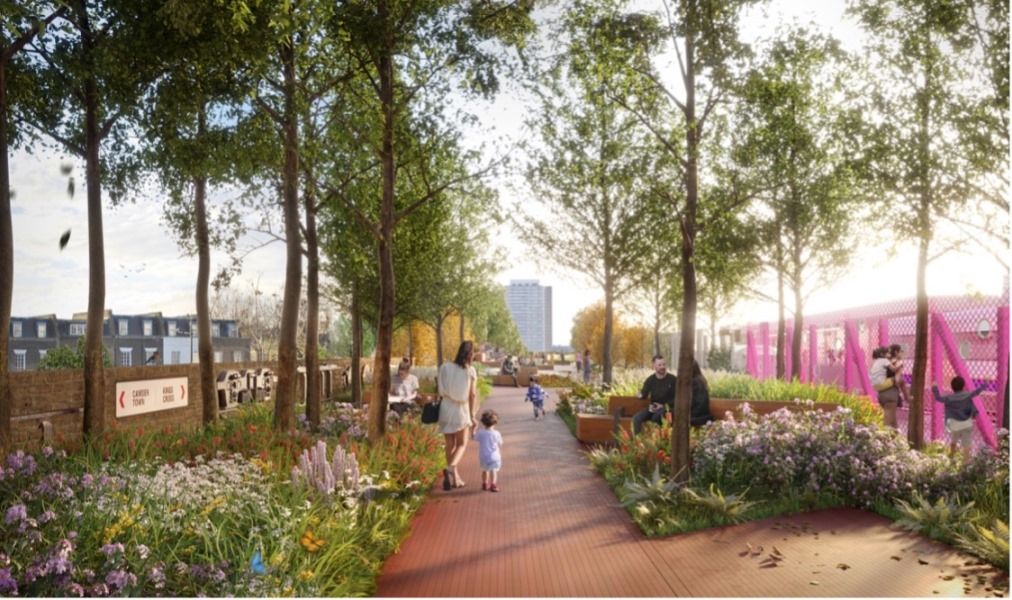 Long-time readers of REVITALIZATION might remember that we’ve been documenting the slow-but-steady progress of creating the Camden Highline, in the historic Camden Town neighborhood in the north of London, England.

This long history of tracking the initiative in REVITALIZATION is the result of my (Storm Cunningham) having been in London over a decade ago, doing some work there at the same time the Camden highline was first being conceived. Local leaders took me on a walking tour of Camden Town to help me visualize how the project would help revitalize the area.

Now, finally, on May 19, 2022, the Camden Highline has been submitted for planning.

The proposal is to regenerate a disused railway viaduct to create a new elevated park that links Camden Town and its famous market via Camley Street to Kings Cross, bringing much needed green space to a broad mix of communities.

Lead Designer James Corner of Field Operations said “We are extremely excited to share this design vision for Camden Highline. The design is intended to celebrate and amplify the unique characteristics of the railway viaduct, dramatizing movement and discovery, set within a sequence of woodlands, meadows, and gardens.”

The community-driven initiative will create walking routes between local neighborhoods, deliver a new international visitor attraction for London, and boost biodiversity in the capital.

The Camden Highline will feature gardens and walkways, alongside seating areas, cafés, arts and cultural interventions, spaces for charitable activities and areas for children’s play. 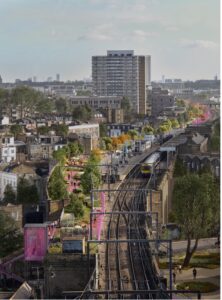 Camden Highline’s CEO, Simon Pitkeathley, said “The design team led by Field Operations have surpassed our already high expectations and there is no doubt that The Camden Highline will be a beautiful park in the sky. Now the real challenge is to raise the funds to build it so that we can all benefit. This will involve a collaborative effort from a range of funding sources, and we would like to talk to anyone who thinks they might be able to help.”

The designs are inspired by woodlands, meadows, hedgerows, and productive gardens, and the park will provide new wildlife habitats for birds, insects and animals.

Visitors will be encouraged to learn about the plants and animals vital to London’s ecology, and a woodland balcony will provide a natural wooded environment that overlooks Camden Town.

The low impact intervention is based on a circular understanding of materials and construction, repurposing an existing railway viaduct and using reclaimed materials from the site wherever possible. The design will respond to the unique characteristics of each bridge crossing and the unique vistas they offer.

Entrances to the park will be designed to transition visitors from the busy streets of Camden to the slow and peaceful eco-system above, through light and art installations on stairways and under bridges.

The Camden Highline route will be 1.2km long, running 8m above the ground, with entrances on Camden High Street, Royal College Street, Camley Street and York Way. The new green artery for London will weave through some of Camden’s most densely populated social housing estates, connecting 20,000 people to new green space.

Alongside its health and social benefits, it is predicted to attract two million new visitors a year, contributing £16m of annual spend to Camden Town and Kings Cross. The submission is for the first phase of the project, from Camden Gardens to Royal College Street, and the park is planned to open in phases from 2025.

The masterplan represents a major milestone for this grass roots initiative, which originated as a concept in a local newspaper in 2017 and grew via a Crowdfund with more than 1,000 supporters. To date more than 300 local volunteers have given their time to local educational and fundraising activities to raise awareness of the project and more than 1600 people have taken part in a walking tour of the Camden Highline route.

The masterplan also features lighting design by Speirs Major and font and wayfinding by design agency Pentagram. The plans have undergone extensive feasibility, safety and technical assessments with Network Rail and sustainability evaluation with Atelier Ten.

London has one of the highest levels of air pollution in the UK and the Camden Highline feeds into a broader stepping up of efforts to introduce more green spaces into inner-London neighborhoods.

The Mayor of London, Sadiq Khan, said “The Camden Highline epitomizes London’s creativity and ingenuity and is the kind of thinking we need as we head towards a green future. Londoners should be encouraged to spend more time outside and in nature, in cleaner and greener spaces for their health and wellbeing.”

It is also the centerpiece of an overarching public realm strategy, Camden Green Loop, to connect Camden’s key landmarks and existing green spaces via public pathways, which will launch later this year with a wayfinding scheme. Laying the foundation for a 15-minute city vision for the borough, it will be a catalyst for active travel and reconnecting residents with their local high streets and neighborhoods.

Camden Highline, the charity behind the project, is now turning its focus to fundraising for construction, and preparing to expand its fundraising team and trustees to support this work. Visit camdenhighline.com to find out more, sign up to our newsletter for updates, donate and help make the Highline happen.

Timelines set the first phase of Camden Highline to open in 2025.