In South Dakota, the Pine Ridge Reservation—site of the infamous Wounded Knee Massacre on December 29, 1890—has long been known as shameful modern-day examples of the United States‘ long history of Native American genocide.

The Wounded Knee Massacre took place because the Oglala Sioux were trying to revitalize their suppressed culture by practicing the Ghost Dance; one of many aspects of their heritage that had been outlawed.

More recently, it was the site of the FBI’s brutal suppression of the American Indian Movement (AIM), as portrayed in the fictional 1992 movie, Thunderheart. AIM was another attempt to revitalize the Oglala culture in particular, and Native American culture across the continent. But the federal government feared that—if successful—it could lead to a renewed attempt to enforce the thousands of treaties the government had signed and broken. That, in turn, could have disrupted land ownership on a massive scale.

Now, yet another revitalization effort has been announced, but this one far less likely to draw Washington’s ire. 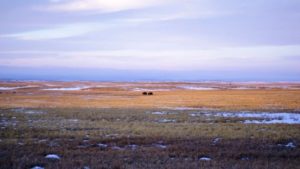 On January 24, 2020, Native American Natural Foods’ Tanka brand announced a new partnership with Niman Ranch—a leader in sustainable agriculture known for its beef, pork and lamb—at the Edible Institute 2020. The new alliance aims to support the economic revitalization on the Pine Ridge Reservation in South Dakota, which is one of the poorest communities in the country.

The partnership is designed to help build a humane and sustainable Native American supply of bison, cattle, and other pasture raised animals, including hogs, raised on Native prairie by Native people.

The effort will benefit the Native American owned company as it seeks to reclaim its leading position as the original, award-winning, highly popular bison and berry snacking bar that replicates a time-honored recipe of Native generations. Those bison, in turn, help to restore prairie ecosystems.

Dawn Sherman, CEO of Native American Natural Foods and member of the Lakota, Shawnee and Delaware tribes said, “Today’s announcement represents long term systematic change. We are investing in our children and grandchildren with the help of Niman Ranch and their commitment to our Native people. We asked each other, at this stage of the business, how do we protect what is there? How do we support the re-emergence of Native culture? Niman Ranch had that aligned vision, the experience, markets, and support to make this happen.”

Native American Natural Foods, a Native-run and Native-owned company, created the Tanka Bar in 2007. It is the original bison and fruit bar that reimagined the meat snacking category, expanding and elevating it beyond jerky. The authentic yet innovative bar achieved great popularity, in addition to numerous awards. As the brand grew, so did the competition. To successfully maintain the best tasting recipe that helped Tanka products gain a loyal following through trusted retailers and distributors, including REI, United Natural Foods (UNFI) and Natural Grocers, Tanka is looking to meet increasing demand through sourcing bison from Native suppliers and to rely on an indigenous supply.

“Niman Ranch hasn’t forgotten what it’s like to be a young company trying to build something meaningful. We are proud to share with Tanka what we have learned from our experience growing from one cattle rancher, then one lamb rancher and later one hog farmer to a network of 740 and growing,” said Chris Oliviero, General Manager of Niman Ranch. “It has always been a part of Niman Ranch’s foundation to support rural farming communities and we understand many of the hurdles. We felt we could align and support the Tanka mission.”

Niman Ranch and its network of 740 small- and mid-size independent family farmers raise livestock sustainably and humanely with no antibiotics or added hormones – ever.

The relationship between Niman Ranch and Native American Natural Foods began just over a year ago after an article in the New Food Economy by Marilyn Noble shed light on the struggles of the Tanka brand. Jeff Tripician, the President of Perdue Premium Meat, LLC. and prior General Manager of Niman Ranch, recalled the initial conversation, “Niman Ranch received help along its journey and is in a position to return the support. A great injustice was done to the Lakota people and anything we can do to help is part of our mission to revitalize rural communities, especially for America’s original farmers and ranchers.”

The alliance announced with Niman Ranch will help NANF gain market stability with combined access to new markets, capital and expertise for greater opportunities with current Native producers and clear incentives for new Native ranchers to join. The plan will include a new focus on utilizing the full animal with higher value cuts for food service and retail, opportunities to grow the brand with current and new customers, a rebranding with the goal for a U.S.-raised, third-party Certified Humane® seal, and a network of advisors and on the ground support.

According to the 2017 USDA Agricultural Census, nearly 90% of the total sales produced on tribal land comes from non-Native producers. Non-Native producers account for 65% of all active farms and ranches on Native American Reservations.

“Between our two brands, we seek to address these issues and create market access to achieve 100% bison raised on Native lands so our Native American roots and ownership will be fully realized,” said Sherman. “Bison is a building block of developing healthy regenerative Native communities. By returning bison and pasture raised animals to Native lands, we are ideally suited for the Native American Natural Foods’ mission.”

The Tanka bars come in three smoky-sweet varieties including: Slow Smoked Original, Spicy Pepper and Apple Orange Peel, that retail for under $5.

The centuries-old traditional recipe is unique to Native Americans and is often referred to as wasna or pemmican. It is made with prairie-fed bison, tart-sweet cranberries and Native American grown Wild Rice. The products offer seven grams of protein, are minimally processed, with no nitrites or nitrates, antibiotics or added hormones. The bars and bites are free of gluten, MSG, nuts, trans fats, soy and lactose and rich in Omega-3 fatty acids.

“We created the Tanka Bar to return the land, lives and economies to the Native people. Today’s announcement kick starts the legacy we dreamed about,” said Mark Tilsen, President and co-founder of Native American Natural Foods.

“We knew we needed an operational partner, and synergies with the Niman Ranch mission make it ideal both strategically and as an active participant with a shared vision. When you restore the bison, you are restoring a keystone species to the great plains which helps restore indigenous economies, prairie restoration and cultural revitalization to benefit us all,” he concluded.