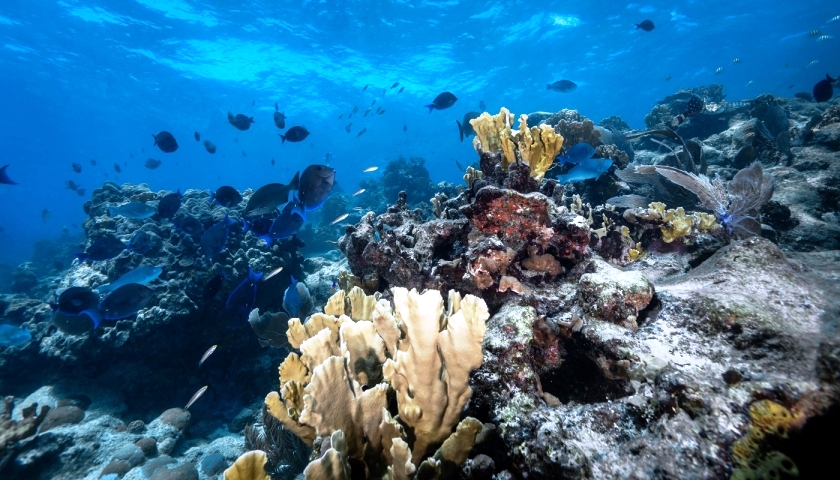 Insurance payments for restoring a coral reef after it has been smashed by a hurricane may seem a bit far-fetched. Nevertheless, this is one of a raft of measures being proposed for the world’s second largest reef.

The Mesoamerican Reef is the largest transboundary coral reef system in the Atlantic Ocean, stretching more than 1,000 km along the coastline of four countries: Belize, Guatemala, Honduras and Mexico. It is critical to the ecological and economic health of the entire region and the Caribbean area.

Coral reefs are among the most biologically diverse and economically valuable ecosystems on the planet. They provide food, livelihoods and economic opportunity for millions of people. Coral reefs also protect coastal communities from storm surge flooding and wave action during tropical cyclones as well as beach erosion. 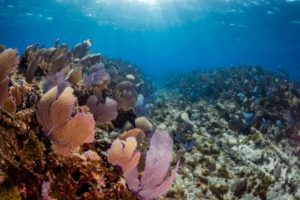 In Mesoamerica, the value of coral reefs across the tourism, commercial fisheries and coastal development sectors is linked to their health, and is estimated at US$6.2 billion per year, according to The Coral Reef Economy: The business case for investment in the protection, preservation and enhancement of coral reef health, an October 2018 study by the UN Environment Programme (UNEP) and partners.

Today, however, the vitally important goods and services of coral reefs are at risk from local and global human activity, and the Mesoamerican Reef is no exception.

Perhaps the most severe and growing threat at the global level is climate change, including coral bleaching and the increased frequency of hurricanes, flooding, and coastal wave and storm surges, all of which can have disastrous impacts on coral reefs. If reefs continue to decline in Mesoamerica, the study warns, their yearly value could fall by US$3.1 billion by 2030.

The Mesoamerican Reef Fund, a partner of the International Coral Reef Initiative, The Nature Conservancy and UNEP, was set up in 2004. Through its Reef Rescue Initiative, with the collaboration of various donors and partners, it is developing emergency response actions and long-term financing mechanisms for reef restoration, including reef insurance, to cover the cost of emergency response and restoration after a climate event.

This work includes identification of key reef sites across the four countries, an economic valuation of reefs and the services they provide, hurricane risk and vulnerability assessments as well as an estimate of the cost of emergency response actions.

Parametric reef insurance is an innovative financing mechanism to support rapid response and restoration actions for reefs after a hurricane.

Pay-outs will be designed to ensure execution of critical actions in a timely fashion. For this, it is vital to understand the legal and administrative structure in each country. Accordingly, the Fund has prepared a regional and country analysis of the existing regulatory framework and public policy, where needed, on financing mechanisms for reef restoration.

The Fund is planning to train and set up emergency response brigades. These will include fishermen and local service providers. Insurance pay-outs, when triggered, will cover their daily fees and mobilization costs. Emergency response actions involve clearing the reefs of debris and carrying out immediate restoration.

To implement and strengthen the emergency response capacities in the four countries, the Fund is building collaboration agreements with local authorities in each country.

In terms of replicability, the following may be relevant for other coral-regions: insurance models to support conservation finance and the integration of natural capital into emergency response planning and implementation; rapid response interventions, including rapid reef cleaning and restoration; methodologies on how to evaluate climate risks to corals; and coastal resilience actions, including continuing reef restoration activities.