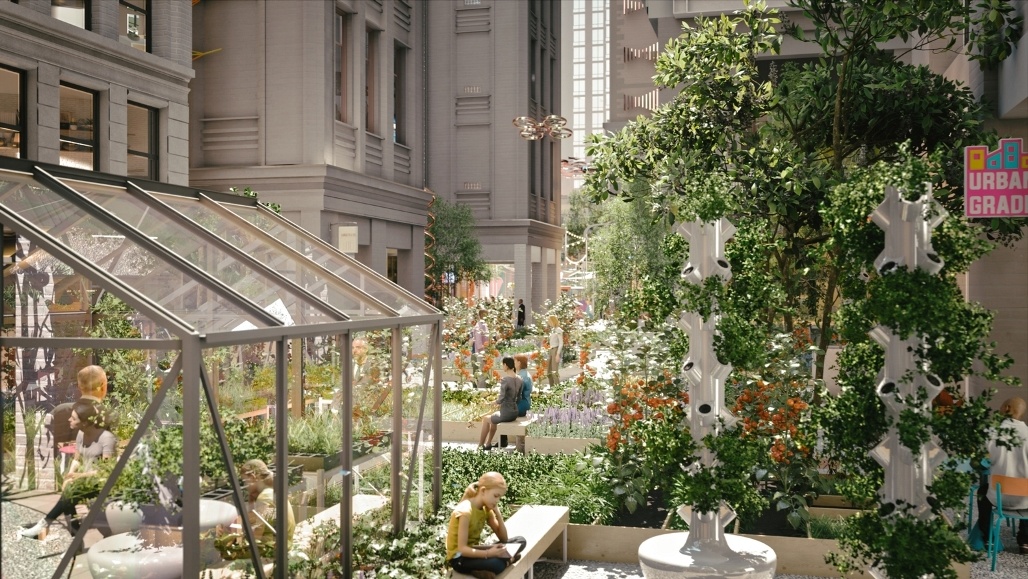 This forms a quiet, secure place for children to play and adults to hang out, since the space is in constant view of resident from their windows, walkways and balconies. 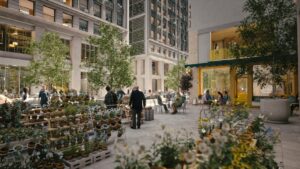 The concept has been proven in Europe for over a century, and was key to the successful revitalization of Liverpool‘s Eldonian Village, a story that will soon be featured in a RECONOMICS Institute video, as part of its Continuing Education for certified Revitalization & Resilience facilitators.

But learning-resistant architects, urban planners, zoning officials and real estate developers have largely stymied the widespread use of interior courtyards here in the United States.

Now, design firm ODA is making an attempt to advance the concept in New York City, showing how existing infrastructure can be blended with a proposed new zoning regulation that would maximize the public realm and increase green spaces in our city. Coronavirus has only heightened the need and demand for a greener urban existence.

ODA is taking an innovative approach to this old concept, though. It’s less focused on creating shared space for residential buildings, and more focused on mixed-use, on increasing the connectivity of the city and on making pedestrians less street-dependent. 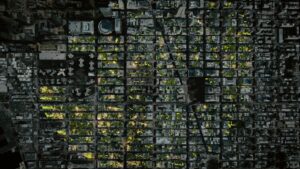 With the new case study, ODA’s goal is to examine how we can reimagine existing spaces and inject life and commerce back into currently depressed areas of the city. They chose The Flower District, stretching from Broadway to 6th Avenue between 23rd and 33rd, which used to thrive as a pedestrian-filled market area with flower vendors, as well as a mix of hotels, residential, and boutique office buildings.

Over the past few decades, the neighborhood has lost its charm, giving way to car traffic and empty storefronts. Most of the commercial spaces could use an update and the lack of green space is apparent. 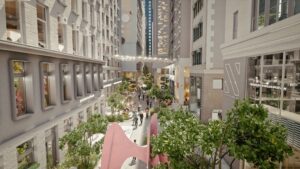 While these elements have reduced the livelihood of this district, many other forces are contributing to its downfall. It is one of many single use areas in Manhattan, segregating where we live, work and play. This commercial district fills up during business hours and is abandoned on nights and weekends, making it harder to maintain a sustainable social and economical urban fabric.

Vibrant pedestrian attractions like the High Line, Madison Square Park and the new Little Island show that breathing life into often unused spaces are possible with great design and a little bit of landscaping. If we can tap into the Flower District’s surrounding high-density anchors, a new reality isn’t far out of reach. 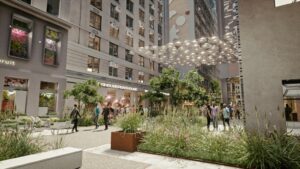 Typical blocks between 6th and 7th Avenues are divided by corner lots and through lots. Every through lot goes 100 ft. deep and varies in width. However, the buildings, for the most part, are not this deep to provide required light and air at the back, in turn creating a courtyard space at the inside of every city block.

A new zoning regulation proposed by ODA encourages new buildings to include bigger courtyards, in return for an increase of floor area and height. An additional bonus would be granted if a passageway is built in from the street to the rear courtyard. As a result, the privately owned area will become public, and the owner will comply with plaza standards and courtyard regulations set by the city.

ODA envisions a revitalized Flower District as a localized ecosystem, where the ground floor surrounding these newly formed courtyards can be meticulously programmed for new experiences. 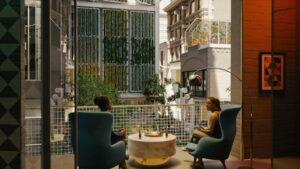 Urban decay can be replaced with a civic plaza, local mom and pop retail, cafes, art galleries, urban farming, and a diversified housing program to support this micro-economy.

The result is a win-win, the private investor gets a taller building, while the city and the public get new more interactive public spaces.

The new green web of environmental, social, and economical sustainability will take root over time and expand in the Flower District and beyond. Let’s hope that New York City is open to seriously exploring the potential, which could lead to a network of lush secret gardens that offer new experiences, expand the imagination, and show the revitalizing power of reinvention.

All renderings courtesy of ODA.