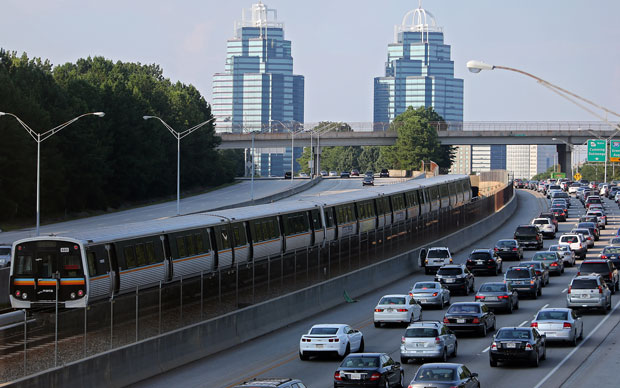 That landscape may be about to change. Drastically.

Over the next seven months, the people at MARTA will quietly button-hole local leaders and state lawmakers — top Republicans included — with the aim of building support for an $8 billion expansion of commuter rail that would transform the region.

The future of metro Atlanta could become startlingly linear — a single file of major economic development up and down what is now Georgia 400, built along a rail line that would link Alpharetta with downtown Atlanta and its airport beyond.

The biggest public works package in decades would have other elements as well. In DeKalb County, there would be a rail link to Emory University and the U.S. Centers for Disease Control and Prevention, plus another line shooting eastward along I-20. Within the city of Atlanta, the Beltline awaits.

Once viewed as a mere vehicle for moving poor people hither and yon, MARTA has become an essential ingredient in the state’s official economic development kit, as businesses look for non-automotive paths to get car-shy, millennial employees to and from work.

“Corporations are increasingly demanding immediate proximity to transit stations. State Farm did it when they came here. Mercedes did it. Worldpay did it when it relocated. Kaiser is going to be located two blocks from here because of the Arts Center Station,” said Robert Ashe, chairman of the MARTA board. The trend will only continue.