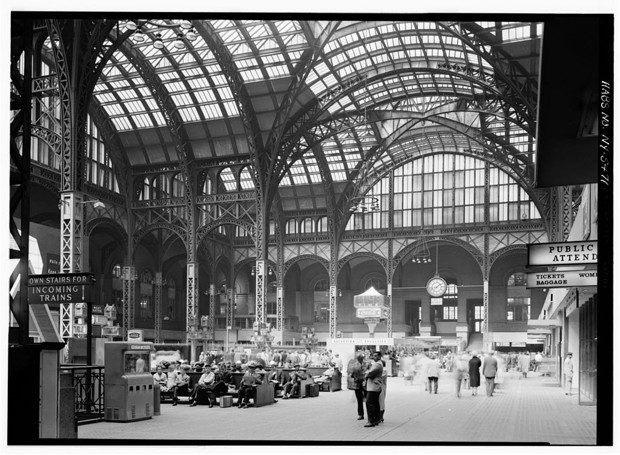 Richard Cameron and James Grimes of the architecture and design firm Atelier & Co., in Brooklyn, have developed a plan to rebuild New York City‘s old Penn Station in all its former glory.

The original McKim Mead & White structure, which opened in 1910, was torn down in 1963 and replaced with the current underground station that serves 600,000 passengers a day.

A rebuilt Penn Station would give New York back its monumental gateway of which it was robbed in 1963. Today’s train passengers are required to navigate a depressing warren of gloomy passages instead of passing through McKim’s sequence of inspiring vaulted spaces.

The first task of a Rebuilt Penn Station would be actually rebuilding Penn Station. Another aspect is to redevelop the surrounding area, turning it into a “beautiful urban ensemble” writes Labine, an effort that involves “creating a great urban outdoor room on the north side of the station.”

Such a plan would fit in well with new developer interest in improving the Penn Station neighborhood. It would also mean relocating Madison Square Garden, which sits atop the station—a shift that seems to be in the making anyway, given the time running out on the arena’s lease.