On January 31, 2022, Chicago, Illinois Mayor Lori E. Lightfoot announced that a solar-powered, 302,000-square-foot industrial complex and a pair of community innovation centers was selected as the winning proposal to revitalize 21 acres of City-owned land at 4300 W. Roosevelt Road in the city’s North Lawndale neighborhood. The RFP was published here in REVITALIZATION. 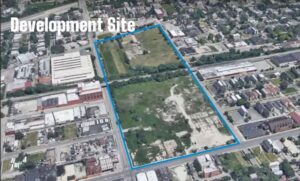 “Chicago’s central location has long made it a prime location for industrial operations,” said Mayor Lightfoot. “Through this exciting and sustainable new project, supported by our INVEST South/West initiative, we will be able to not only build on this reputation, but bring lucrative freight and logistics jobs and a community innovation space to our North Lawndale community.”

“I want to congratulate Related Midwest and 548 Development for their winning proposal and look forward to breaking ground and cutting the ribbon to their project in the near future,” she added.

The $38.4 million project by 548 Development and Related Midwest will leverage the location’s strengths for freight and logistics with a pair of industrial structures: a 153,460-square-foot building with 31 dock spaces on the northern portion of the property, and a 148,680-square-foot-building with 31 dock spaces on the southern portion of the property.

The site will also include a North Lawndale Innovation Center, which will provide two buildings for community-based retail, workforce training, and office uses in partnership with local community organizations. An adjoining community park will offer outdoor gathering space for the community, and Chicago muralist Max Sansing will design and create exterior mural art along Roosevelt Road.

“548 Development is proud to partner with Related Midwest to redevelop this site in line with a vision that lifts up the neighborhood and creates enormous opportunity,” said AJ Patton, Partner at 548 Development. “We will create a facility that will be economically empowering for the community of North Lawndale and a hub for the community to learn, thrive and grow.”

The complex was among eight responses to a formal request for proposals (RFP) issued by the Department of Planning and Development (DPD) in 2020.

“The RFP process helped to assess what’s possible for the site and the most viable way to reclaim its potential for jobs, innovation, community open space amenities, and connections to the future Altenheim trail,” said DPD Commissioner Maurice Cox.

Bounded by Roosevelt Road, and Kostner, Kildare and Fifth Avenues, the site is located in the Roosevelt/Cicero Industrial Corridor and was occupied by a Copenhagen snuff plant and other industrial users before being cleared in the 1980s and 1990s prior to its acquisition by the City.

“This is truly a celebratory moment for North Lawndale. Just a few months ago we announced Lawndale Redefined as a finalist for the second round of Invest South/West awards. Now, North Lawndale will see yet another huge community investment for our neighborhood. For years, I’ve advocated for community investment in the 24th Ward and we’re finally seeing the fruits of our labor,” said Alderman Michael Scott Jr., 24th Ward. “I look forward to cutting the ribbon on this development and thank Mayor Lightfoot for taking on the challenge and making it her mission to ensure we are pouring dollars into our South and West sides communities.”

This sustainably designed project is expected to generate up to 700 permanent and temporary jobs. Minority- and women-owned business participation in construction is estimated to achieve 40 percent.

Extensively landscaped parking areas will be provided for 86 trailers and 417 passenger vehicles.

The site is bisected by CSX railroad’s active Altenheim rail line, a portion of which is being studied by DPD for partial adaptation as a recreational trail. The development will provide ample space for the future implementation of the Rails to Trails project in this location which will include a landscaped greenway and walking and bike trail. Access to the trail would be provided from a passive recreation area on the north half of the site.

In order to improve access to the site from the Eisenhower Expressway/I-290 for semi-trucks, the Chicago Department of Transportation (CDOT) is carrying out a project to raise the elevation of the rail viaduct on Kostner Avenue just north of Fillmore Street.

“Related Midwest is thrilled to partner with 548 Development, Alderman Scott and the North Lawndale community to develop this vacant land into a facility for the entire community,” said Curt Bailey, President of Related Midwest.

“The site at 4300 W. Roosevelt Road will generate valuable jobs at a state-of-the-art facility, and the planned innovation center will be a rich asset for those who live here. We look forward to working with community leaders and organizations as we plan for this transformative project,” he added.

The $8.4 million project is partially funded through a $4.8 million CARES Act Recovery Assistance grant to the City from the Economic Development Administration of the U.S. Commerce Department. The local match for the project will be funded by local and state funds. The project will lower the roadway under the viaduct, which carries the Altenheim line, to raise the elevation to at least 14 feet.

The proposal is expected to include Tax Increment Financing (TIF) assistance by the City of Chicago to help pay for environmental remediation expenses and other eligible costs. The proposed purchase price for the land is $1.

The community review process included initial RFP presentations in February 2021, which narrowed the contending development teams from eight to four. DPD staff subsequently worked with each semi-finalist on project refinements until arriving at a winner based on project viability, financial feasibility, development team experience and diversity, and other factors.

Portions of the proposed project may require review and approval by the Community Development Commission, the Chicago Plan Commission and City Council. Construction could start by late 2022.

The project is the 11th RFP selection to be issued through the City’s INVEST South/West initiative, which is allocating more than $1.4 billion in public and private resources to 10 South and West Side community areas. Collectively, the RFP winning responses are valued at more than $365 million in total project costs.