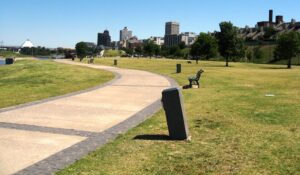 Photo of Tom Lee Park in Memphis, Tennessee is by jjj_901 from Pixabay.

“The signing of this innovative agreement with Ducks Unlimited will provide both habitat and disaster protection for our cities along the Mississippi,” said Mayor Jim Strickland of Memphis, Tennessee, and the MRCTI Tennessee Chair.

One of America’s largest expanses of wetlands, the Mississippi River Valley (MRV) is a vital migration corridor for 40% of North America’s waterfowl and 60% of its bird species, but an estimated 75% of bottomland and riparian habitat has been lost.

Since 2011, the MRV has sustained nearly $60 billion in natural disaster impacts including flooding, droughts and major storms.

Under the Memorandum, MRCTI and DU will work together to profile and promote disaster mitigation through habitat restoration.

They have the shared goal of accelerating the pace of natural infrastructure project delivery, such as floodplain and backwater habitat restoration and enhancement, that increases waterfowl habitat, reduces exposure of cities and towns to flooding and provides economically important recreation opportunities along the corridor.

In addition, more than one-third of the mayors involved with the Mississippi River Cities and Towns Initiative are DU members. Ducks Unlimited CEO Adam Putnam was joined by Memphis Mayor Jim Strickland to announce the Memorandum.

“The Mighty Mississippi has etched her place in our history, economy, folklore and the American character,” said Putnam.

“Waterfowl, wildlife and people depend on this essential alluvial valley for our daily needs, and it only makes sense for DU to lock arms with MRCTI in common cause for conservation and restoration projects up and down the watershed. More than one-third of the mayors involved with the Mississippi River Cities and Towns Initiative are DU members, and we’re excited to partner with MRCTI to promote projects that are sustainable and ecologically beneficial – projects that will protect jobs, secure our economy and enhance both our man-made and natural infrastructure across the Mississippi River Valley,” he added.

Photos of ducks on the Mississippi River flyway courtesy of DU.