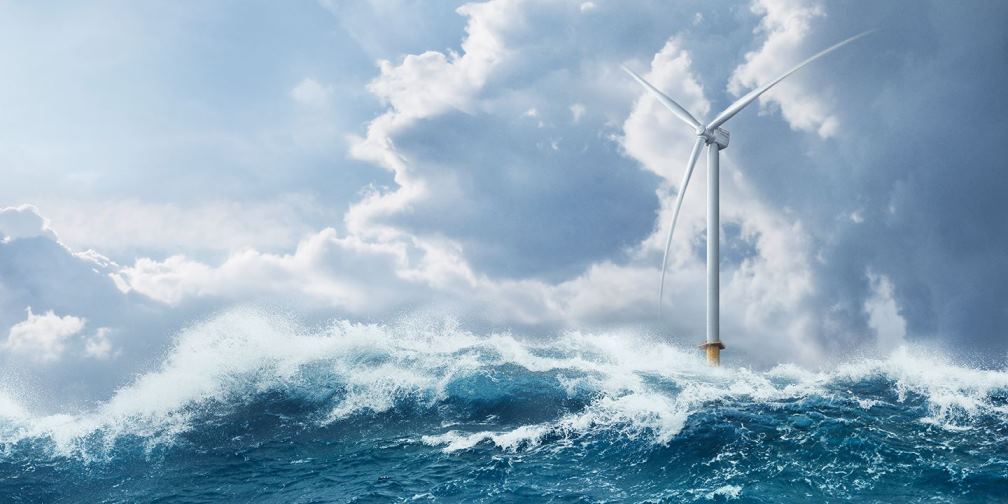 When I (Storm Cunningham) was doing some community revitalization work for a regional government agency in Denmark some years ago, I visited the giant Vestis blade factory for offshore wind turbines on the large rural island of Lolland. Other than agriculture, this factory was by far the biggest local employer.

I live in Northern Virginia now, so I’m fairly familiar with how the city of Portsmouth, along the southern coast of Virginia, has been struggling to economically revitalize for many decades. Now, that recovery seems to be at hand, and it also involves European blade factory for offshore wind turbines.

Now, on October 25, 2021, Germany-based Siemens Gamesa Renewable Energy held a launch ceremony with representatives from state and local government authorities and wind industry partners in Virginia for what will be the first offshore wind turbine blade facility in the United States. 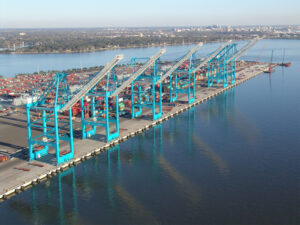 Photo of Portsmouth Marine Terminal courtesy of Port of Virginia.

The Siemens Gamesa blade facility represents another step to redevelop the Portsmouth Marine Terminal into an offshore wind hub. Siemens Gamesa will look to potentially expand the facility if awarded future projects in the region, creating additional jobs in the future.

“We at Siemens Gamesa have shown the offshore wind industry the way for over 30 years. Establishing the industry’s first dedicated offshore wind turbine blade facility in the United States proves again that we are leading the offshore revolution. The U.S. offshore market is a critical part of our overall global strategy, with our presence in Virginia playing a crucial and central role. Our multimillion US-dollar investment has been energized by the strong collaboration with Dominion Energy and support of Virginia’s legislature and authorities,” said Marc Becker, CEO of the Siemens Gamesa Offshore Business Unit.

Siemens Gamesa will develop more than 80 acres/32 hectares at the Portsmouth Marine Terminal in Portsmouth upon execution of a firm order for the 2.6-GW Coastal Virginia Offshore Wind Commercial Project with Dominion Energy. Representing a cost of more than $200 million dollars, the facility would perform finishing of patented Siemens Gamesa Offshore IntegralBlades.

Approximately 260 jobs at the facility are expected to be created when fully operational. Also, Siemens Gamesa intends to create around 50 service jobs to provide operations and maintenance services for the Coastal Virginia Offshore Wind Commercial Project.

Public and private leaders lined up to praise this revitalizing economic win:

“As Congress considers taking historic action on climate, this facility evidences that offshore wind can create significant new manufacturing activity and quality jobs to American communities,” said Steve Dayney, Siemens Gamesa’s Head of Offshore North America. “We are hopeful this commitment will lead to further action by federal and state policy makers to establish policies to provide long term certainty and help sustain the competitiveness of this facility in the global marketplace for decades to come.”

“Virginia is leading the way in offshore wind and using blades from this new facility in Hampton Roads on our Coastal Virginia Offshore Wind project is a major win for the region,” said Robert M. Blue, Dominion Energy Chair, President and Chief Executive Officer. “It is great to see wellpaying, clean energy jobs are on the horizon as an offshore wind supply chain develops here in Virginia.”

“The Port of Virginia is proud to be able to help with the development of an entirely new industry that will spur job growth, drive our economy and create the US East Coast’s offshore-wind logistics hub right here in Portsmouth,” said Stephen A. Edwards, CEO and executive director of the Virginia Port Authority.

“The industry is going to be closely watching Virginia, and this port, and we welcome the interest. We have a very unique opportunity to set ourselves apart by being at the forefront of this movement to create clean, renewable energy along the East Coast. We welcome Siemens Gamesa and are looking forward to a long and productive relationship,” he continued.

“Virginians want renewable energy, our employers want it, and Virginia is delivering it,” said Governor Ralph S. Northam. “The Commonwealth is joining these leading companies to create the most important clean-energy partnership in the United States. This is good news for energy customers, the union workers who will bring this project to life, and our business partners. Make no mistake: Virginia is building a new industry in renewable energy, with more new jobs to follow, and that’s good news for our country.”

“Offshore wind energy will create jobs and economic prosperity across the country, and with President Biden’s Build Back Better Agenda, we’re showing that the United States is open for business on clean energy,” said Secretary of Energy Jennifer M. Granholm. “Virginia is helping lead the way to strengthen the nation’s domestic supply chains of renewable energy and keep energy prices affordable for American households as we strive for a cleaner future.”

“This announcement is a major milestone in the development of Virginia’s first offshore wind project – and the second active offshore wind project in the country,” said U.S. Senator Mark Warner. “I am proud that Virginia is leading the way in offshore wind development and reinforcing its role as a major player in an industry that will power our future. I commend Governor Northam for his leadership on this issue and Siemens Gamesa and the Port of Virginia for bringing this project to the Commonwealth and creating 21st century jobs. As the project progresses, I look forward to working at the federal level to pass infrastructure legislation, which will support a wealth of other investments to drive innovation, job creation, and economic growth for years to come.”

“I applaud Governor Northam and Siemens Gamesa for working together on this historic partnership that will bring good-paying jobs to the Commonwealth and strengthen our clean energy economy. Today’s announcement is a testament to Virginia’s talented workforce and robust infrastructure network, including the Port of Virginia, which are key to attract economic development,” said U.S. Senator Tim Kaine.

“This partnership will further cement the Commonwealth as the premiere offshore wind hub for the Eastern United States. I’ll keep pushing to get the bipartisan Infrastructure Investment and Jobs Act and the Build Back Better bill – two transformative, complimentary, and essential pieces of legislation – across the finish line to ensure Virginia has the resources it needs to power homes and businesses in need and continue to lead the nation in clean energy for years to come,” Kaine added.

“This announcement today will bring good jobs to Virginia and boost clean energy efforts. Hampton Roads is one of the most vulnerable communities to climate change and rising sea levels, and as such, we must ensure we are on the frontlines of the clean energy economy. I applaud Governor Northam for his efforts to secure investments in jobs and clean energy right here in Hampton Roads and across the Commonwealth,” said U.S. Congressman Bobby Scott.

“The offshore wind industry will secure Coastal Virginia’s economic prosperity for decades while ensuring the Commonwealth is leading the way in addressing climate change and promoting clean energy solutions,” U.S. Congresswoman Elaine Luria said. “I want to thank Governor Northam for prioritizing this growing industry and Siemens Gamesa Renewable Energy for investing in Hampton Roads and its workforce. I will continue to push for clean energy investments in Congress to create jobs and advance renewable energy.”