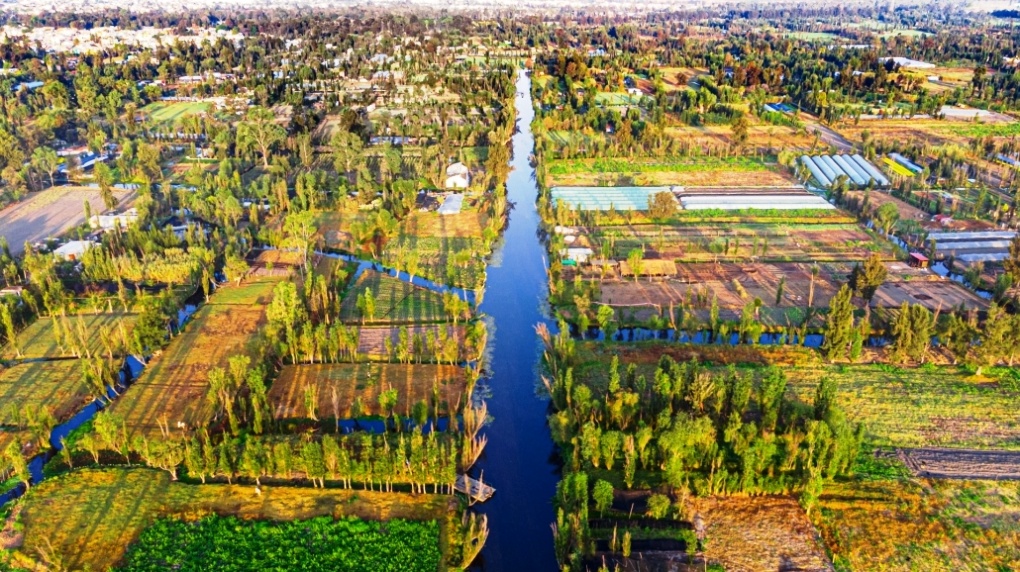 Xochimilco is a city south of Mexico City best known for its canals. The area’s wetlands, recognized for their important biological and cultural value, are why Xochimilco is named as a World Heritage Site (UNESCO) and Site of Agricultural Importance (FAO).

Humedalia is a Mexican organization that works for the conservation and restoration of the Mexican wetlands. It is part of the Regeneration International partner network and as such, has applied for the Scientific and Technical committee evaluation program of the 4 per 1000 initiative.

Humedalia’s work focuses on the chinampas of Xochimilco. (Chinampas refers to a system of growing crops in floating gardens created in shallow lake beds, using farming techniques developed by the Aztecs).

Agricultural production in chinampas, or islands of arable land, started over 800 years ago. When the first tribes that settled in the Mexico basin, they were able to produce 4t/ha of crops. These high yields allowed the development of big urban settlements, such as what we have today in Mexico City. These cities generated a big demand for water resources, and ultimately led to the transfer of agriculture to urban soil.

Today, Xochimilco’s wetland and its landscape of chinampas retain only 2 percent of the fresh water that was originally in the basin. This agricultural landscape is highly threatened by processes linked to urbanization and the devaluation of the farmers’ labor.

About 80 percent of the chinampas are abandoned, and water pollution has deteriorated the soil’s fertility. The few agricultural producers that remain face steep competition and low profits, because the intensive agricultural model, mostly subsidized, has forced these producers to lower the prices.

Despite the negative impact of urbanization, Xochimilco’s wetlands remain vital for Mexico City. They provide multiple environmental benefits, such as microclimate regulation, water catchment and recharge of the groundwater reserves, oxygen and food production, nutrient recycling and carbon sequestration. In a city where air pollution levels usually exceed healthy standards, carbon sequestration is fundamental for the city’s resilience.

Wetlands sequester large amounts of carbon (0.4-32 Mg ha-1 year-1) in their sediments because of their anaerobic conditions, which slow the rate of decay of organic matter, facilitating carbon accumulation. In turn, carbon sequestration can be optimized by using traditional farming techniques (sustainable) in the chinampas in combination with new organic farming techniques, such as the biointensive method.

This project seeks to increase carbon sequestration through a water-soil systemic approach. By restoring canals and rehabilitating hectares of idle land, the quality of the water available for watering will improve, and the chinampas’ soil will be regenerated, leading to an increase in the amount of the ecosystem’s carbon sequestration.

The project also will contribute to the local endemic flora and fauna’s habitat protection, such as the axolotl Ambystoma mexicanum, a type of salamander known as the Mexican walking fish. Protecting local flora and fauna will help restore the cultural identity linked to ancestral agriculture that survives in the hands of traditional farmers.

This project for regenerating the chinampas soil (rehabilitation, growing and maintenance) will provide the local community opportunities to increase family income and engage multiple generations, creating a space for the exchange of knowledge and experiences about ancestral farming techniques. Women and children who typically don’t participate directly in food production can become involved in marketing, sales and processing.

As part of the Regeneration International partner network, and applying for the 4 per 1000 initiative, Humedalia project helps improve socio-ecological conditions of Xochimilco’s wetland. Carbon sequestration will have a positive direct impact on the air quality of one of the most polluted cities in the world.

But the project will also focus on the social aspect, improving the wellbeing of the community by generating self-employment at the chinampas, and creating the right conditions for social participation through collaborative networks that strengthen the community.

This article by Mayra Rubio Lozano—director of scientific research and sustainable development for Humedalia A.C.—originally appeared on the website of Regeneration International. Reprinted here by permission.