Bulldozed decades ago to make way for Interstate 5, a hospital and the Rose Quarter, the painful story of Portland’s Albina District often goes unacknowledged, and the possibility of future development continues to threaten the neighborhood’s livability.

The area as it is today.

One group is trying to change that. Investors, architects, artists, developers and members of Portland’s African American community have come together to form Albina Vision Trust. The group aims to come up with a vision to build affordable housing and help restore 94 acres along the Willamette in inner North and Northeast Portland.

To accomplish this, leaders believe they need to start at the grassroots level, rather than taking a top-to-bottom approach, said Rukaiyah Adams, a key leader of the Albina Vision. The Albina Trust would act as “curators” for the district, raising money, providing programming and determining how land will be used. 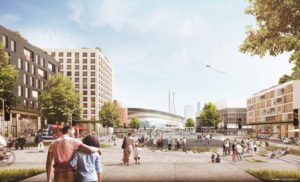 The bold concept for the Albina Vision is rooted in creating a grand public open space supported by vibrant recreational, entertainment, commercial, and residential activity in the core of the Rose Quarter and a broad civic open space at the Willamette River waterfront commemorating the Great Migration and celebrating the river and City of Portland.

The concept stretches north across NE Broadway, incorporating a redeveloped neighborhood focused on housing for all and a rich pedestrian environment. Creating affordable, inclusive commercial opportunities, employment, and housing for our diverse community reinforced by unique public open space are at the foundation of the Vision. 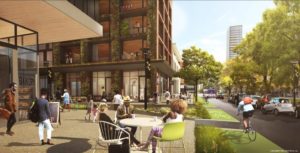 The Vision outlines how to position and integrate the district into the city, incorporating relationships and connections to sites near the district where dramatic change is underway, likely, or possible in the next 50 years, including the Convention Center/Lloyd District, the Portland Public Schools Blanchard site, the east bank of the Willamette River, the Burnside Bridgehead, Interstate 5, and the U.S. Post Office property across the river in NW Portland.

Lower Albina is primarily an industrial district, with a working harbor area, an important living-wage job base and a small mixed-use historic area along N Russell Street. Freight movement by trucks and trains is an important part of the economic well-being of Lower Albina.

Interstate Avenue is the most important north-south multi-modal connection, carrying light rail, bicycle facilities and motor vehicle access to North Portland. Planning efforts from the last few decades in Lower Albina have focused on retaining and enhancing the industrial and employment functions of the district. 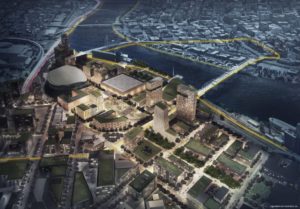 Between 2010 and 2035, Lower Albina is expected to grow by about 200 households and 200 jobs, for a total of 300 households and 2,300 jobs. This rendering illustrates a possible development scenario showing what growth might look like in the district.

There’s potential for a “Green Loop” alignment and key flexible street connections leading to the river and adjacent neighborhoods. It’s envisioned that historic N. Russell Street will be an even more vibrant and rich neighborhood with mixed-use and commercial activities that are compatible with nearby industrial and employment uses.

All renderings courtesy of Hennebery Eddy.

See article by Abby Lynes in The Oregonian.