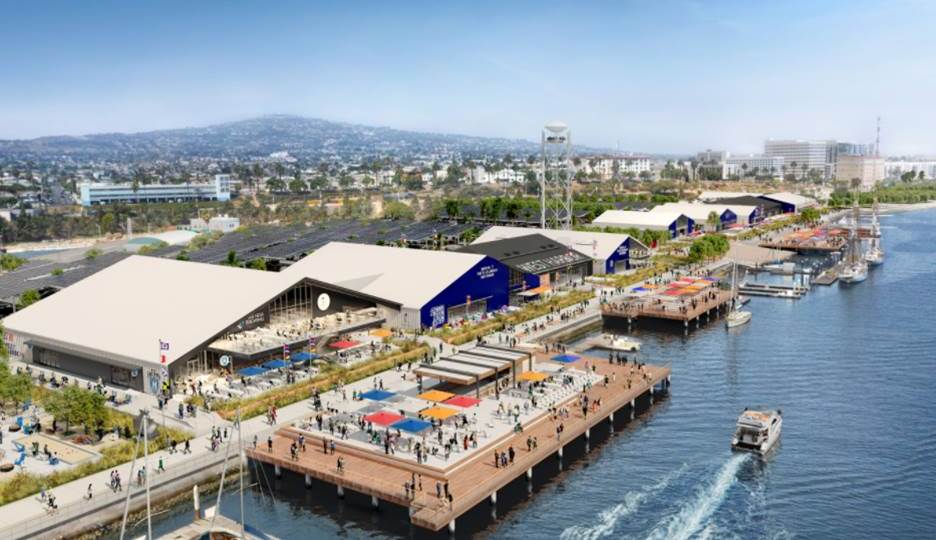 In Los Angeles, California, the architecture, urbanism and landscape-design firm Studio One Eleven has unveiled design details and renderings of West Harbor, the expansive and transformative dining and entertainment destination that’s intended to revitalize the LA Waterfront in San Pedro.

Developed by The Ratkovich Company and Jerico Development—in partnership with the Port of Los Angeles—West Harbor extends public access in the working port district, adding dining and recreation on a large scale. The entertainment district combines with nearby historic and new destinations to catalyze redevelopment of the area. 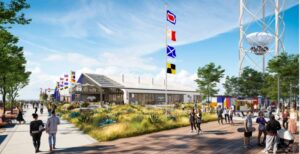 “What’s great about this project is that it recognizes L.A.’s identity as a port town,” said Studio One Eleven Founding Principal Alan Pullman.

“West Harbor will be the public’s window into a working waterfront, a dynamic place of commerce and activity within the civic landscape. This is going to be a world-class destination that draws people from all over the region, giving Angelenos a chance to experience the city from a different vantage point,” he added.

Studio One Eleven, based in Long Beach, is the project’s architect, a firm recognized for its thoughtful approach to urban revitalization. New York City-based James Corner Field Operations, celebrated for its design of Manhattan’s the High Line Park, has created the site’s masterplan and expansive outdoor spaces.

The project is designed to attract the benefits of regional tourism while economically revitalizing the local community. 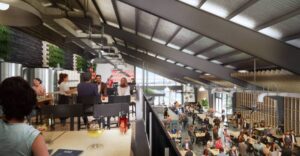 West Harbor is at the previous Ports O’ Call Village, a 1960s-era landmark that had fallen into disrepair. Improvement challenges included structures that had suffered marine degradation and soil needing extensive remediation.

The buildings were not flexible enough to meet current tenant needs, and their positioning on the site precluded a continuous waterfront promenade for visitors, an integral part of the Port of Los Angeles Town Square and Promenade Master Plan.

The revitalization provides access to this portion of the California Coast Trail, a 1200-mile, multi-use route stretching along the Pacific coastline from Mexico to Oregon.

Studio One Eleven’s revised scheme for West Harbor envisions a collection of large, flexible pre-engineered metal shed buildings lining a new one-mile-long waterfront promenade designed by James Corner Field Operations. The metal structures are not only lightweight and cost-effective, but conducive to the high water table and need for 100-foot-long piles. Their iconic style and materials are appropriate to the historic waterfront and its working port environment

In addition, the new metal structures and promenade capture the essence of this dynamic working port’s industrial, gritty nature, with references to containers, scaffolding and mercantile buildings found in the area. Building upon the social and communal nature of the project, Studio One Eleven has also conceptualized the design of a 6500-seat outdoor stage and festival lawn. At the southern tip of the site, this venue – the first waterfront amphitheater of its kind in Southern California – will be a destination anchor for the project and the San Pedro community.

“One of our critical tasks was to work directly with incoming tenants to conceptualize how to inhabit the sheds, giving them character and interest while making them operationally functional,” said Pullman.

This work included modifying each shed with unique storefront openings, mezzanines, and view decks. In addition, Studio One Eleven will design a large beer garden and interiors for one of the new anchor tenants, Mike Hess Brewery, as well as the tenant improvements for several others.

A testament to the scale and attraction of West Harbor, its leasing team recently signed eight new tenants. The new restaurant leases comprise over 65,000 square feet, plus 32,000 square feet of outdoor patio and overwater deck space. This latest round of leasing represents 65 percent of the space currently available.

“West Harbor will be a signature development for the region, and these leases show the quality of offerings that will draw people to the LA Waterfront,” said The Ratkovich Company Founder Wayne Ratkovich.

Port of Los Angeles Executive Director Gene Seroka said the leasing milestone “builds on the billion-dollar investment in public access infrastructure the Port of Los Angeles has made over the past two decades—including $100 million in waterfront and recreational infrastructure for this exciting development. For every popular attraction that Southern California offers, there is nothing comparable to the visitor experience we are creating here on the LA Waterfront.”

Secured in partnership with brokerage firm Retail Insite, the leases represent a vibrant and diverse mix of industry innovators; groundbreaking, immersive entertainment brands; and iconic dining and drinking destinations (from Southern California and across the U.S.).

All image courtesy of Studio One Eleven.